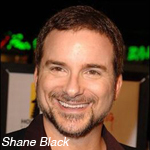 Shane Black, the writer behind Lethal Weapon and the writer-director of Kiss Kiss, Bang Bang, has signed on to direct a live-action adaptation of the manga series Death Note.

Series is about a college student who finds a death note that allows him to kill by writing a person’s name while picturing them in his mind.

Warner Bros. landed the rights to a U.S. live-action version in 2009.