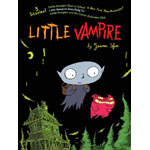 Sfar is teaming with StudioCanal for the project, which will be a 3D animated adaptation of his book. He will write and direct the feature.

Variety reports that StudioCanal and Sfar and Antoine Delesvaux’s Paris-based shingle Autochenille are co-developing and will co-produce, with StudioCanal set to distribute in France, the U.K. and Germany.

“More than about friendship, Little Vampire is about the freeing imagination that is useful to overwhelm difficult realities. The whole point is to be funny about sad subjects,” Sfar said.