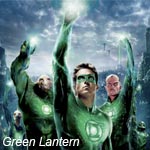 Sony Imageworks vfx supervisor Jim Berney and his team revisit the classic comic book and use real-world references to construct the luminous world of Green Lantern.

The summer of 2011 may go down in history as the season of visually spectacular 3-D superhero movies. Following in the footsteps of Marvel and Paramount’s Thor, Warner Bros. will unleash it’s much-anticipated feature adaptation of Green Lantern, and if the footage screened at WonderCon this spring is any indication, director Martin Campbell has a big treat in store for both genre fans and general audiences.

With an estimated budget of  $150 million, Green Lantern tells the story of Hal Jordan (Ryan Reynolds), a cocky test pilot who is recruited by a mysterious intergalactic team to help fight a dark enemy known as Parallax. Our hero taps in to his newly gained supernatural powers after he puts on a mystical green ring given to him by a visiting alien. Of course, there’s a lot more to the story, which was first conceived by DC Comics creators Bill Finger and Martin Nodell almost 71 years ago. Suffice it to say that the Sony Pictures Imageworks vfx team, led by Jim Berney, had over 1,400 shots to deliver as they worked on the details of the intergalactic backdrops, green-hued costumes and clever ways of depicting the superhero’s special powers. The team was in charge of creating the environments and all of the CG characters, five hero characters, 25 members of the Green Lantern Corps, the Guardians, the super-villain Parallax and massive numbers of background characters. 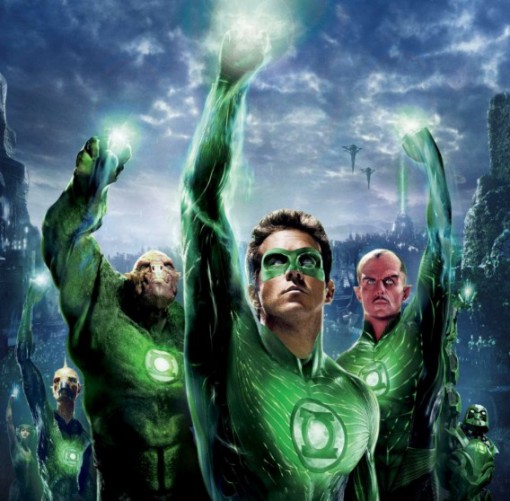 One of the key elements that set this feature apart from other similarly themed epics is that it doesn’t just focus on the adventures of a superhero on Earth. “If you look at a lot of the superhero movies, they’re mostly Earth-based, but Green Lantern isn’t really about one superhero’s battle against a super-villain,” explains SPI vfx supervisor Berney. “If you read through the comics throughout the years, it goes on and on. It has epic storylines and it encompasses many, many characters. Our key challenges were coming up with the right effects for the iconic green suit, depicting the whole environment of Oa [the home planet of the Green Lantern Corps] and generally, bringing to life all these characters and places that fans have known and loved for years.”

Digital effects supervisor Dave Smith points out that since the environment had to be built in full 3-D, relying on matte paintings was not an option. “This was certainly unique from things that we had worked on before as we needed the flexibility to travel around the planet,” he points out. He also mentions that the skies of Oa are covered by colorful alien clouds, which were created with Sony’s in-house [CPU-based] volumetric and modeling rendering package SVEA.

One of the film’s most memorable visual motifs is the special translucent glow of the hero’s costume. “This translucent green light emanates from the hero’s body, his chest, down to his arms, and combines with his energy and manifests around him,” notes Berney. “These ‘energy’ lights had to be rendered through multiple layers while maintaining a solid feeling throughout.”

Smith says the visual effects team looked at the make-up of deep-sea creatures such as jellyfish and hydra medusa to get inspiration for Green Lantern’s suit. As Smith points out, “If you look at Tron, for example, only the suit lines were luminous, but in our movie, the materials around those lines are also radiant, which required major subsurface scattering to create that deep translucency.”

Other technical challenges involved the design of Parallax, a clearly effects-driven character that is made out of millions of souls that he has sucked out numerous planets. “He is a very predatory villain and all these souls that make up his beings are all hand animated,” says Smith. “We used Maya and Houdini to  build all these connective, cobwebby tissues as procedural effects, working with codes specifically written by our effects animators. We employ Maya along with proprietary tools for surface modeling, layout and animation. Rendering is done with a physically based ray tracer, and we also use our internal 3D lighting and  compositing package Katana.”

The vfx team’s research process took them from the deepest corners of the oceans to the far reaches of space. The designers went over the key Green Lantern comic books to get ideas for the various constructs they had to create. They also referred to scientific photographs of nebula and death clouds in deep space. In addition, they pored over the huge tomes of artwork created by Oscar-winning production designer Grant Major, who collaborated with Peter Jackson on the Lord of the Rings trilogy and King Kong.

Ultimately, the complexity and the scale of the material, both internal and external, were the biggest challenge for the Sony Imageworks team. “Building all different layers of energy that is being emanated from the Green Lantern suit required us to create a construct of more than 40 elements,” notes Berney. “Then this energy has to work with all the other material in the scene as well, which requires creating additional levels of geometry.”

Berney admits that keeping the property’s die-hard fans happy was something that he and his team always kept in mind as they designed layer after layer of visual magic. “It all boiled down to making it look very real and very cool at the same time,” he explains. “There’s a big fan base out there: If you don’t get it right, you are going to get torn apart!” 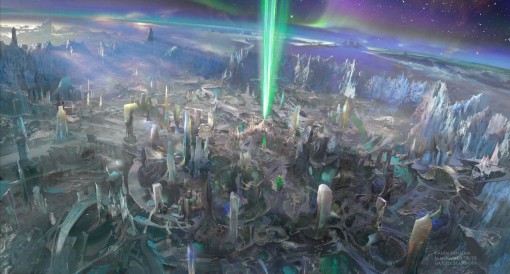