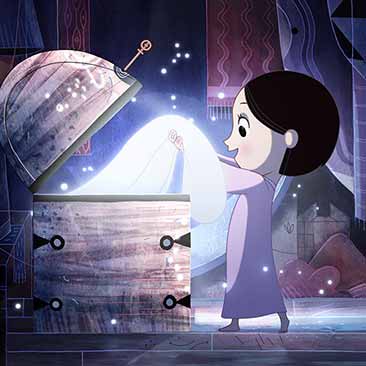 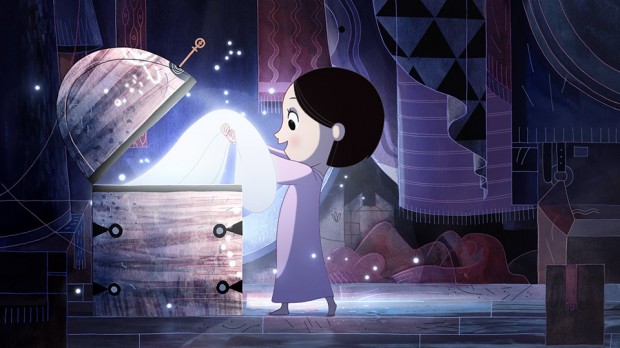 With their much-anticipated, beautiful 2D pic, Song of the Sea, director Tomm Moore and the team at Cartoon Saloon find inspiration in Ireland’s charming folktales.

Five years ago, director Tomm Moore, producer Paul Young and the team at Cartoon Saloon revived the dream of traditional 2D animation with the charming and highly original The Secret of Kells. The film went on to receive an Oscar nomination for Best Animated Picture and officially put the Kilkenny, Ireland-based studio on the global toon lover’s map. Now, Moore and company are ready to shake up the animation scene once again with their sophomore feature, Song of the Sea, another beautifully crafted 2D offering, which received unanimous praise when it debuted last month at the Toronto International Festival.

Described as a modern fairy tale, inspired in equal parts by traditional Irish legends, the poetry of William Butler Yeats, the magical realms of Hayao Miyazaki and contemporary films such as Into the West, the film centers on a 10-year-old boy named Ben and his younger sister, Saoirse, who is revealed to be the last Seal-child. “I wanted our movie to offer a glimpse of Irish culture as well as telling a universal story, in a way similar to how Miyazaki’s movie do it for Japanese culture,” says Moore during a recent phone interview. “Miyazaki’s My Neighbor Totoro (1988) is certainly a touchstone for Song of the Sea.”

Moore explains that the idea for the film came about when he was spending some time with his family on the west coast of Ireland. That’s when his then 10-year-old son (whose name is Ben, like the boy in the movie) noticed some dead seals in the water. “We asked the women we were renting our cottage from about the seals, and she told us that young fisherman were killing seals, blaming them for the drop in fish stocks, which was insane, because human over-fishing is what is hurting the industry,” says Moore. “She told us that in the older days, nobody would dare harm a seal because people believed in the Selkies — seals that could transform to human form and back. … So I began to really think about these great stories — and what we stand to lose when we forget these great myths and fairy tales.”

The director and the film’s writer, Will Collins, chose to set the film in 1987, partly because Moore was 10 years old in that year (the same age as the boy in the movie) and also because he saw the 1980s as a time of transition in Ireland. Interestingly enough, Cartoon Saloon also produces the animation for Moone Boy, the popular BBC series starring Chris O’Dowd, which also looks back nostalgically at the 1980s.

A Band of Artists

“One of the things we learned from our first movie was how to work with other studios and with our crew together and get everyone to take the flame and bring it back to us,” says Moore. “We have worked together with some of the animators for a while, so it very natural for us to keep a unique style. We toyed with the idea of stereoscopy with this feature, but we had to change some things, and we really like to stay independent. We don’t have a Jeffrey Katzenberg or John Lasseter tell us what to do, so that helps us keep our voice. We work as a collection of small partners.”

Moore says although the film cost about 5.5 million euros ($7 million), the studios put in so much R&D time and extra hours that the price tag should really be about 10 million euros ($13 million).

Thanks in part to the efforts of the film’s art director, Adrien Merigueau, who also directed the studio’s award-winning short Old Fangs, the Cartoon Saloon team was able to craft a new style that evolved out of The Secret of Kells. This style offers a slightly more three-dimensional approach, and is bit softer, warmer and watercolor-influenced than the first film, while still true to the studio’s recognizable look. Nørlum studio in Denmark, Studio 352 in Luxembourg and Digital Graphics in Belgium also joined forces with the team in Kilkenny to bring the film to animated life in such a relatively short time.

Making Magic in the Emerald Isle

Cartoon Saloon’s cofounder, CEO and the movie’s producer, Paul Young, says he personally loves the movie because it resonates with families, especially with brothers and sisters. “The fantasy elements are great, but the movie is also a real family drama, in the tradition of the kitchen sink dramas,” he says. “We had a private screening for our crew, and people were coming out with tears in their eyes. I think Song of the Sea has a more emotional punch than Kells, which was a more historic drama.”

Now that this labor of love is ready to hit the screens around the world — indie distributor GKIDS will release the pic in select U.S. cities on Dec. 10 — Moore says he can’t wait to see how general audiences will respond to it. “The second movie can be a challenge, because you want it to be as good or better than the first one,” he says. “So you just have to put your head down and make a good movie. We had some screenings for the cast and crew, and it was wonderful to see people laugh and cry at the same places together.”

Looking at the big animation landscape in 2014, Moore, like many of his colleagues, expresses a huge level of astonishment and gratitude. “I remember when The Secret of Kells came out, we were so happy to be nominated with these other great movies that were so brilliant and eclectic — there were two stop-motion features (Coraline, Fantastic Mr. Fox) and one hand-drawn (The Princess and the Frog) as well as a CG movie (Up),” he says. “This year, you have this big commercial movie from Warner Bros.’ The LEGO Movie, as well as Jorge Gutierrez’s The Book of Life and LAIKA’s The Boxtrolls and Studio Ghibli’s Princess Kaguya — which I’m looking forward to see. There is such a rich amount of creative work happening all over the world.”

“I think things have changed a lot in the 14 years or so that I’ve been in this business,” Moore says.  “There are a lot more opportunities, but there’s less money to be made. You can do your own creative work and get it seen, but you won’t get paid very much. It has always been about finding the right balance in making a living and working on your own projects. That’s the best that any of us can do!”

Both Moore and Young believe that their studio is now known for its stylized 2D features, and they are very humbled by the reception their projects get in the U.S.: They were a huge hit at Comic-Con this past summer. Cartoon Saloon has also produced the animation for the “One Love” segment of Salma Hayek’s upcoming feature The Prophet and is co-producing an adaptation of Deborah Ellis’s novel The Breadwinner (with Nora Twomey directing).

Perhaps that’s why it’s not surprising that Moore is loyal to 2D animation and says he doesn’t see himself helming a CG-animated feature any time soon. “As I get older, sometimes I wonder if I will ever get into CG animation,” he says. “I love to draw on paper — that’s always been very important to me. Another great thing about 2D animation is that it’s timeless. You can watch Totoro and Ponyo, and you won’t know that they were made 20 years apart. You don’t see the big changes that you see in CG animation. When you look at Toy Story and Toy Story 3, there’s a big difference and you can definitely notice that evolution.”

GKIDS will release Cartoon Saloon’s Song of the Sea in New York and Toronto on December 10, before expanding to Los Angeles and other markets later that month.