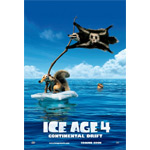 The fourth installment of the Ice Age franchise introduces several new characters as well as meticulously rendered visuals to draw fans back into theaters.

Who could have predicted that a CG-animated movie about a saber-toothed tiger, a sloth and a wooly mammoth would have such legs? Back in March of 2002, when Chris Wedge and Carlos Saldanha’s first Ice Age movie hit theaters, few could have imagined that the Blue Sky movie would go on to hit a homerun at the box office, making over $383.3 million in theaters worldwide. Add to that the fact that each of the pic’s sequels have improved on that initial film (the third installment set a new box office record internationally with a total cume of $886.7 in the summer of 2009) and it’s no wonder that Fox and Blue Sky are putting on another show with their most valued players again this year.

Directed by Blue Sky veterans Steve Martino and Mark Thurmeier, Ice Age: Continental Drift has a whole set of new tricks up its sleeve. This adventure finds our pals Manny, Diego, and Sid stranded on an iceberg and facing strange sea creatures and battling pirates in a new world. The directors talked about the challenges and pleasures of playing with familiar characters during a recent phone interview as they were about to put the final touches on their movie.

“What we love about this movie is the very nice balance of real emotion, action and comedy we saw in the script from the very beginning,” says Martino, who also worked on Blue Sky’s Horton Hears a Who!, Robots and the shorts Gone Nutty and Scrat’s Continental Crack-Up. “We really liked Michael Berg’s first draft of the script. He really set a great foundation for us and we took it from there.”

Thurmeier, who also co-directed 2009’s Ice Age: Dawn of the Dinosaurs, says he felt the same way about the script.

“I spoke with our producer Lori Forte, who has been the true constant amongst all the movies,” he notes. “She said they had this idea for the fourth movie, and I was a bit reserved at first. I was very happy with the idea for the third film, which was a great mash-up of the buddy comedy and the Journey to the Center of the Earth scenario. But then, I found myself laughing out loud as I read the script. The premise is to take these characters and put them in an Odyssey-like, sea-faring, pirate adventure. It was totally insane, but it really worked!”

Fans of Scrat, the saber-toothed squirrel whose love for acorns is a highlight of the franchise, will be happy to know that he’s also well represented in this journey.

“Scrat actually causes the break-up of the world,” reveals Thurmeier. “This big crumbling down of the worlds allowed us to really push what we could do visually. I think our chief technology officer Carl Ludwig, who created Blue Sky’s rendering software CG Studio, had a heart attack when he read the script. We have the dam breaking and a big storm sequence at sea. Yes, we had water in Ice Age 2, but this was so huge that we had to approach it spritely.”

CG supervisor Kirk Garfield was a big proponent of using Houdini to handle the heavy lifting for the demanding sequences such as the big cataclysmic event that ends the first act of the story.

“The scale of the spectacle in the water is really like nothing we have done before,” notes Thurmeier. “We’ve received a lot of compliments because of those ocean scenes.”

The animators were also able to utilize cloth dynamic tools to better depict the fur on the characters.

“We use the new technologies on their fur since they don’t have any clothes,” notes Martino. “You can also see the results in Captain Gutt’s luscious, gnarly beard.”

The latest animation tools also helped the team create things like that secondary motion of the waddle on Granny’s neck and the jiggle of the layer of fat on a giant elephant seal’s body.

One of the creative team’s earliest goals was to really differentiate themselves form the previous films.

“We set out to the give the movie more scope than before,” he says. “What we had going for us was that we had characters that people all around the world seem to really love, so we had to up our game in every way possible. In the first Ice Age movie, we had limitations in terms of rendering and animation, now we’re way beyond that. We can really use the camera in different ways. We can really take advantage of the 2:35 wider screen format.”

Like Madagascar 3, that other animated animal movie of the summer, the filmmakers also took advantage of introducing new outrageous characters, voiced by recognizable stars, to keep everything fresh. Not only do moviegoers get to meet some of the gang’s new family members—Wanda Sykes is fantastic as Sid’s 80-year-old grandma and Keke Palmer plays Peaches, Manny and Elly’s teenage daughter—there is also a band of pirates led by Captain Gutt, a prehistoric orangutan voiced by the one-and-only Peter Dinklage. Aziz Ansari, Nick Frost, Rebel Wilson, Alain Chabat and Jennifer Lopez are some of the other international band of sea-dwellers.

“I am really proud of our new characters,” notes Thurmeier. “We only added one speaking part, which was voiced by Simon Pegg, in our last movie. But for Continental Drift, we have a great group of pirates. Peter Dinklage was absolutely fantastic, and the character itself was wonderfully designed by Pete DeSève. We took a lot of liberties, making them look like pirates by the way their fur was depicted. We even researched the actual fur and hair growth of orangutans and other primates.”

The filmmakers also did their homework by watching several seasons of The Deadliest Catch, Discovery Channel’s documentary series about fishing vessels, as well as watching nautical films like Captain Scarlett, Treasure Island and Master and Commander.

Another reason to take in this prehistoric adventure is to enjoy the dazzling immersive 3-D visuals. The directors worked closely with stereoscopic supervisor Daniel Abramovich from the early planning stages in order to make the best use of the visual possibilities of the medium.

“We tweaked our process so that we were thinking about 3-D from the very beginning in a completely nonintrusive way,” says Thurmeier. “It really added a different layer. Personally, I love to be placed completely in the middle of a world, and for me, 3-D is the way to see this film.”

Martino also expresses his pleasure about the way the extra dimension adds to the scenes depicting motion through the water and the movement of clouds in the skies.

As a father of two teenage daughters, Martino says he was quite taken by certain aspects of the screenplay.

“Manny and Ellie have a teen daughter in this movie, and Manny doesn’t want his daughter to grow up,” notes the director. “She is pushing back like all teens do. As my daughter is packing up for college, I found that aspect of the film really resonant. So much of it is how we as parents deal with a child that is ready to stand on her own.”

Of course, one must never underestimate the eternal appeal of that very driven squirrel known as Scrat, who is voiced by Blue Sky founder Chris Wedge himself.

“All the Scrat sequences are absolutely fun to do,” says Martino. “Just like the Road Runner shorts, they are built on a very simple premise. Having been at Blue Sky for all these years, it was like finally getting a chance to give the Ferrari a spin.”

He says the secret to Scrat’s global appeal is very simple.

“Scrat is all about the desire and greed that we all have in us,” Martino believes. “And it’s that desire that is always his undoing. He always takes it one step too far. In animation, you always need to believe the heart and soul of the character. That part needs to be realistic. That gives us the latitude to exaggerate the visuals. Then we can bug his eyes out and drop him off miles high in the sky.”

In fact, Scrat seems to be the perfect stand-in for the group at Blue Sky, who continue to face new and more challenging obstacles year after year.

“When we were mixing the audio at Skywalker Sound in northern California, the folks from Brave and Madagascar 3 were also working on their movies,” recalls Martino. “We all have a lot in common and we lived the same journey for the past four years. We see their work and the work of the other directors at our studio and it forces us to keep raising our game. Audiences have a lot of choices these days, and I think that makes the overall animation scene get better each year.”