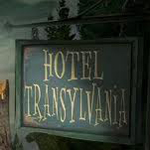 Adam Sandler will voice the lead role of Dracula in Hotel Transylvania, a 3D animated feature film directed by Genndy Tartakovsky and due for release from Sony Pictures Animation on Sept. 21, 2012.

Here’s how the studio describes the feature:

Welcome to the Hotel Transylvania, Dracula’s (Sandler) lavish five-stake resort, where monsters and their families can live it up, free from meddling from the human world. But here’s a little known fact about Dracula: he is not only the Prince of Darkness; he is also a dad. Over-protective of his teenage daughter, Mavis, Dracula fabricates tales of elaborate dangers to dissuade her adventurous spirit. As a haven for Mavis, he opens the Hotel Transylvania, where his daughter and some of the world’s most famous monsters – Frankenstein and his bride, the Mummy, the Invisible Man, a family of werewolves, and more – can kick back in safety and peace. For Drac, catering to all of these legendary monsters is no problem – but his world could come crashing down when one ordinary guy stumbles on the hotel and takes a shine to Mavis.

Also lending their voices to the project are Kevin James as Frank (a.k.a. Frankenstein); Fran Drescher as the bride, Eunice; David Spade as Quasimodo; Steve Buscemi and Molly Shannon as married werewolves Wayne and Wanda; Cee Lo Green as the mummy Murray; and Andy Samberg as Jonathan, a 21-year-old regular guy who becomes a guest at the hotel.

Tartakovsky is best known for his work creating such hit animated series as Dexter’s Laboratory, Samurai Jack and Star Wars: Clone Wars. He also recently did conceptual work and storyboards on Iron Man 2 and designed the prologue for the movie Priest.

Michelle Murdocca is producing the film, with all the animation by Sony Pictures Animation.