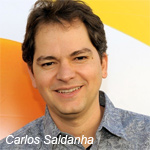 Rio director Carlos Saldanha (also of Ice Age fame) has signed an exclusive five-year production and development deal with 20th Century Fox, which released the Brazilian-flavored CG flick last year, Variety reports. The 3-D film took in a worldwide box office total of about $485 million. The deal will include live-action as well as animated projects.

Rio 2 is currently underway at Blue Sky Studios and Fox Animation, with Saldanha developing and directing. The sequel will again star Jesse Eisenberg and Anne Hathaway and has a reported wide release date of April 11, 2014. Saldanha is also developing Alienology for the studio, based on the Ology illustrated fantasy books by Dugald Steer.

The director is represented by WME and the law firm of Newhouse Porter Hubbard.