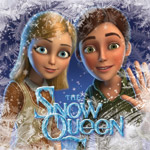 How Moscow studio Wizart Animation is updating the nation’s CG industry with its first feature effort, The Snow Queen.

The worlds of fairy tales and animation are inextricably linked—from the earliest days of long-form animated film, fanciful tales from around the world have found new life through the freedom of artistry and suspension of disbelief inherent in the medium. Even as time and technology march on and live-action directors try their hand at reinventing the genre with eye-dazzling visual effects, it is hard to find a more winning combination than a well-known magical story and the storytelling magic of animation.

One of the most ambitious projects in the European animation scene right now is such a combination. Russia’s Wizart Animation, with studios in Moscow and Voronezh, is putting the final touches on their stereoscopic 3-D CG take on The Snow Queen, based on the beloved story by Hans Christian Andersen. This first for the Russian animation industry is being co-produced by INLAY Film and has piqued international curiosity.

Conceived back in 2007, Wizart will be revealing footage from the movie for the first time at the Cannes Film Festival this month. The film follows an orphan girl named Gerda living in a chilled world under the influence of the evil Snow Queen, who has cooled the people’s hearts. When her best friend Kai is mistakenly taken prisoner by the Snow Queen, Gerda sets out on a dangerous quest to free him and bring love and warmth back into the world.

“The Snow Queen story is one of my favorites since childhood,” shares writer/director Maxim Sveshnikov, who lists Disney’s The Lion King and Pixar’s Finding Nemo as his top toon influences. “Though it takes place in Denmark, it is close to our country and well-known in Russia because of a very famous Soviet [animated] adaptation of the fairy tale by Lev Atamanov. Nowadays, it is very difficult to attract children to watch this old feature, because we are living in a time of new technologies. But the story is full of beautiful moments and special magic, which attract spectators. So we tired to combine a magic atmosphere of an old story and modern influences of our feature.”

A New Polish for an Old Treasure

When dealing with well-worn source material, especially a widely known fairy tale that has been in circulation since the 1800s, one of the greatest challenges is keeping the story recognizable while making sure your take stands out from countless other adaptations across many mediums.

When Sveshnikov and the film’s screenwriters, co-director Vlad Barbe and Vadim Sveshnikov, were first approached with the idea for a CG fairy tale and had decided upon Snow Queen, the director was keenly aware of this balancing act.

“Before starting to work on this movie, I watched all previous versions of the story. There are a lot of them!” he notes that animated and live-action features and TV series from multiple countries were all included in his research.

While some stuck fast to the original story, and some went out on a limb, Sveshnikov confidently asserts that Wizart’s take is different from any version audiences have seen before.

“[The Snow Queen] has modern dynamics. It will be a big adventure with friendship, love, chases, fights, characters’ evolutions and magic,” he elaborates. “You will see the change of elements—from winter to summer, from fire to water. Moreover, it is one of the first stories about the Snow Queen where we allocated stories of minor heroes. So you can find new ones and know better the story of the Snow Queen—why she’s willing to destroy creation and freeze people’s hearts.”

For Yuri Moskvin, who is a producer on the film with Sergey Rapoport and Alexander Ligay, offering a new interpretation of this rich classic had practical as well as aesthetic appeal.

“As we are a Russian-based studio, it seems logical that we would start with Russian fairy tales—in fact, Russian 2D animation based on national myths and tales saw an increase lately. But from a producer’s point of view, it is too risky to produce animation, which is quite expensive, and to limit its release only to the national market from the very beginning. So, we were targeting foreign release, too. The Snow Queen seems to be a perfect match in this regard: it is known abroad and it is loved in Russia.”

Building Castles in the Snow

In striving for a film with what Moskvin describes as a fresh, modern and contemporary style that can compete in quality with the high standards of international audiences, Wizart set out to forge new paths and set new highs for the Russian animation industry. Produced with a  budget of about $7 million (U.S.), well below American toon blockbusters but quite high for Russia, The Snow Queen’s animation team was built from the ground up and through trial and error had to find ways to emulate the successful films they admire from other parts of the world.

“The first barrier Wizart had to overcome was the lack of professionals; literally, as there is no established animation school and not so many projects produced, the entire workforce was grown in-house,” Moskvin explains. “It was really a challenge, and we are glad that we’ve managed to build one of the best teams in the country, though there is still a lot to develop.”

He adds that another difficulty was the lack of similar projects in the country—but notes that this was no reason for the team to lower its standards.

Although some members of the crew had previous experience with animated feature service work at the studio, Moskvin says they had to learn on the go and find the best solutions to all aspects of the process. A key problem was refining the character design and animation.

“Though the story was good, we hat to make it believable; to animate human and animal characters, to place them into fairy tale locations that at the same time had to be realistic. To make it more real we also paid attention to the details such as the textures of the snow, greenery, hair and fur, clothes and furniture. No one has ever done anything like this before in Russia.”

Sveshnikov concurs that the main challenge of the production was a technological one in the still-developing Russian CG industry.

“In our movie we have the biggest number of effects ever done in Russian CG animated movies,” he notes. “Sometimes when you’re watching the first episodes produced, you realize what kind of things could be improved, and you make it happen in the next scenes. For Wizart Animation [Snow Queen] is the first step … It will help us to make even more complicated projects, from a technical point of view, in the future.” An in-house R&D team helped supplement the crew’s Maya-based toolset with process management, rendering and setup solutions.

The innovations the studio has developed in the production of Snow Queen are already showing potential for future projects. Moskvin notes in particular the hair effects utilized in the film.

“When you watch foreign features you never think how difficult it is to produce hair effects, but modern animators set high standards in this area,” the producer opines. “At the beginning we had a lot of problems with the texture of Gerda’s hair. The first time we see Gerda in the movie, she is upside-down in a close-up. And when the episode was produced, the outcome was a lead character with a lifeless bunch on her head.” To resolve the issue, a specialized team threw themselves at the problem, creating a dedicated hair and fur department. “It was a breakthrough—the whole feeling of the movie was transformed!”

These hair and fur texturing and dynamics breakthroughs will come in handy for the studio’s next 3D feature project, Sheep ‘n’ Wolves set for 2014. The variety of creatures involved in the story will offer plenty of work for the studio’s designated hair specialists.

Despite the steep learning curve, the interest the project has generated around the world proves Snow Queen has been well worth the effort. In addition to the added value of 3-D stereoscopy, Wizart produced an English dub track in Los Angeles to boost international appeal. After presenting at last year’s American Film Market and opening sales this February at the European Film Market, Moskvin says he has received positive feedback from buyers in over 20 territories, some of whom have already signed deals. So far a North American distributor has not been tapped, but while the producer acknowledges it is a difficult market to break in to, he says they will continue pursuing the possibility. He is convinced that Snow Queen is the kind of touching story full of appealing characters—not to mention the stylish animation and modern 3-D effects—that can succeed on a global scale.

“At the beginning of production, we had so many critics and people thought that we wouldn’t produce a shot. But we did,” Sveshnikov sums up. “Every scene we’ve made, every public discussion, every publication is proving that we’re moving straight forward to our goal. We’ve improved technologies and become more professional since we started. And now we are happy to present our feature to the international market, and really hope that the story we’re telling will catch the attentions of families around the world.”

Footage from The Snow Queen will premiere at the Cannes Film Festival, with delivery set for winter 2012-13. Visit wizartanimation.com or thesnowqueenfilm.com for more info.

Tales from the Weird Side
Art of the Matter