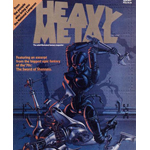 Director Robert Rodriguez is getting into animation, announcing he’s formed a new company called Quickdraw Animation and that it is already working on a new feature film version of Heavy Metal.

Speaking at the SXSW festival in Austin, Texas, Rodriguez said Quickdraw will focus on CG-animated features and will have at its heart six to eight animators that will be responsible for all the story and visual elements. The animators will be based at Rodriguez’s Troublemaker Studios in Texas and the actual animation work is expected to be farmed out. The filmmaker says the studio, which will have its own financing and infrastructure, is designed to make movies on a faster timeline than most studios currently achieve, though he did not go into detail.

The studio also is working on a second animated feature, this one a family feature that Rodriguez declined to name because that would give away the concept.

Rodriguez also said production was set to start this summer on Sin City 2.

Heavy Metal is the name of the American edition of Metal Hurlant, the avant-garde 1970s French comics magazine. It was first made into an animated feature in 1981, with a sequel of sorts released in 2000. Director David Fincher had been developing a new animated Heavy Metal until Paramount decided against funding the project.

Rodriguez announced at last year’s Comic-Con in San Diego that he had acquired the film rights.