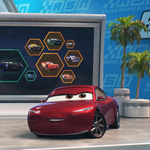 As Pixar’s latest summer event flick burns rubber towards theaters, the tension is building in the newest Cars 3 trailer. The spot, “Rivarly,” gives fans a deeper psychological insight into the conflict between cocky young racecar Jackson Storm and our ol’ pal Lightning McQueen. We also get a sneak peek at some of the nail-biting on-track action, and the training methods Lightning turns to to up his game — from the ultra high-tech to the gritty old-school.

Synopsis: Blindsided by a new generation of blazing-fast racers, the legendary Lightning McQueen (voice of Owen Wilson) is suddenly pushed out of the sport he loves. To get back in the game, he will need the help of an eager young race technician, Cruz Ramirez (Cristela Alonzo), with her own plan to win, plus inspiration from the late Fabulous Hudson Hornet and a few unexpected turns. Proving that #95 isn’t through yet will test the heart of a champion on Piston Cup Racing’s biggest stage!

Armie Hammer also stars as the voice of Jackson Storm. Meet more of the cast and characters here.