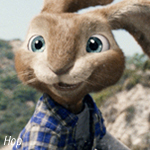 Rio opened big overseas, while domestic moviegoers made it clear that they prefer to see Russell Brand in animated movies over live-action remakes.

Fox and Blue Sky Studios’ Rio opened with an estimated $55 million in ticket sales in 72 foreign markets. The film played particularly well in Brazil, Russia, Germany and Mexico — it opened No. 1 in each of those markets. The first big international of the year raises expectations for a huge opening for the stereoscopic 3D movie in North America this coming weekend. Directed by Carlos Saldanha, Rio features the voices of Jesse Eisenberg, Anne Hathaway, Jamie Foxx, George Lopez, Leslie Mann and Jemaine Clement.

Meanwhile, Illumination Entertainment’s Hop topped the domestic box office for the second weekend in a row, selling an estimated $21 million worth of tickets. The film features Brand as the voice of E.B., the son of the Easter Bunny, and has now earned an estimated $68 million dollars domestically. Hop has not hit it off quite as well overseas, where it’s only taken in about $6.7 million for a worldwide total take of about $75 million.

Hop’s weekend performance posted a 42 percent drop from last weekend, but still enough to win the top spot over Arthur. The remake features Brand in the role originated in 1981 by Dudley Moore and opened with $12.6 million. That was just enough to beat out Hanna, which opened with strong buzz at No. 3 with $12.3 million, and the No.4 film Soul Surfer’s $11 million.

Rango dropped to 11th place, taking in about $2.3 million in its sixth weekend of release. The film has grossed $117 million domestic and $107 foreign for a total of $225 million.

Zack Snyder’s visual-effects driven fantasy Sucker Punch was in 12th place with a $2.1 million weekend. That brings the film to $33 million domestic after three weekends in release. Foreign tickets tally up to $20 million so far. Battle: Los Angeles came in just behind Sucker Punch with a $1.5 million weekend haul to bring its totals to $81 million domestic and $96 million international.