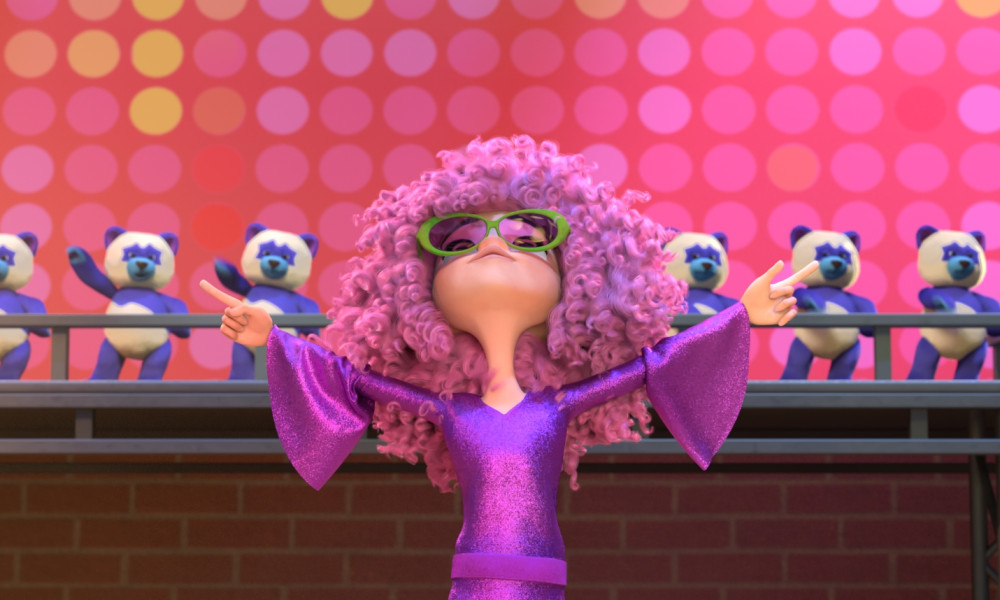 ***This article originally appeared in the December ’21 issue of Animation Magazine (no. 315)***

Russia’s animation power player Riki Group is widely known around the world for creating popular franchises such as The Fixies and Kikoriki. This year, the innovative studio is unveiling a charming new animated feature titled Teddy Boom in Russia and at the American Film Market event in November. The movie follows the adventures of a self-assured thief who steals a unique relic and hides it inside a teddy bear. However, he learns a big lesson about what’s important in life when the magical stuffed animal comes to life.

The film’s executive producer Elena Chirkova tells Animation Magazine that the studio wanted to work with an original story and not follow the traditional, well-worn path of adapting a familiar plot or a classic fairy tale. “This is an original story, which is told with both children and adults in mind,” she notes. “We are positioning the project as an animated family movie, which follows the adventures of toys that come to life — in the best traditions of movies like Toy Story and Night at the Museum. What sets it apart is that our main characters are people and they solve their human problems, while their conflicts and toys are intended to help them change. The movie features many toys and they play an important role, but first and foremost, this is a story about people.”

According to Chirkova, who was on the team that delivered Kikoriki: Deja Vu and makes her producing debut this year with Teddy Boom and Finnick, the studio planned to produce the feature as a CG-driven live-action movie. But the creative team decided to return to a fully-animated movie after a few months of development. “Animation allowed us to revive and breathe life into toys in the literal sense of the word, which every child dreams of,” she notes. “Our main task was to show the story of the re-education of the so-called negative character and help him remember his forgotten childhood qualities and values. The story aims to remind us that each one of us has both good and bad. Sometimes, when there are close people nearby who love you and are ready to sacrifice everything for your peace and safety, you can change. Our protagonist is able to find the light and goodness in himself, thanks to the rare treasure hunted by thieves.”

Chirkova points out that as the filmmakers began to focus on the story of a man who learns to evolve and become a better person, the movie became more mature and psychological. “The protagonist in the original version was more dramatic and had more difficulties,” she notes. “We didn’t want the viewer to experience difficulties of perception. So we removed about 15 minutes in order to make the film more accessible and brighter, more understandable for the whole family. We removed everything that could make the story heavy.

Our Boom Bear is a character who has the qualities of an average three- to four-year-old child: He loves to play around and be naughty at times, and he causes a lot of trouble for the main character Max, but he is by no means his opponent or a villain.”

The movie also allowed the Riki Group to test its skill by creating animated human characters for the first time. “The project’s stylization work was a challenge for our production and character designers,” she explains. “It was a difficult task because the character could look fantastic in sketch form, but did not work in 3D. It makes no sense to create a super-realistic character; we searched for an exaggeration acceptable in animation [while] trying to keep them attractive so that the viewer can empathize with them.”

The producers relied on a motion-capture mockup in the beginning stages of the animation. “This, of course, accelerated the process in the beginning and the animators themselves had to work in the costumes,” Chirkova recalls. “But by the end we abandoned the mockup. The film was completed in the traditional way. The animators were looking for new approaches to working with human characters, developed their own animation style in relation to the characters in this project. We wanted to make it a unique, modern and stylish teddy bear. That’s why we had over 60 sketches of the color scheme. In the film, you will see the option that was selected over all the previous iterations!”

Fans of previous Riki Group shows should pay special attention to the details of the movie since the creators have cleverly placed fun Easter eggs referring to the studio’s famous creations. “Teddy Boom is created by the team who worked on Kikoriki,” says Chirkova. “So we hope audiences — many of whom grew up with the series — will discover all the fun, hidden details that are included in the movie!”

Over 300 people worked on the movie at the studio. “We use some of the most advanced technologies in the animation industry to produce state-of-the-art CG animation,” says Chirkova. “We are one of the first in the Russian Federation to introduce new animation technologies that appear in the world. The events take place in the toy store, and we note the high potential for licensing, which can be already confirmed with agreements on the domestic market. We see great potential for this movie all over the world, since the story, plot and characters are so vital and universal. Toys and animation speak a unique and universal language that connects children and families all over the world.”

Teddy Boom will be released theatrically in Russia in November. For more info, visit en.riki.team.