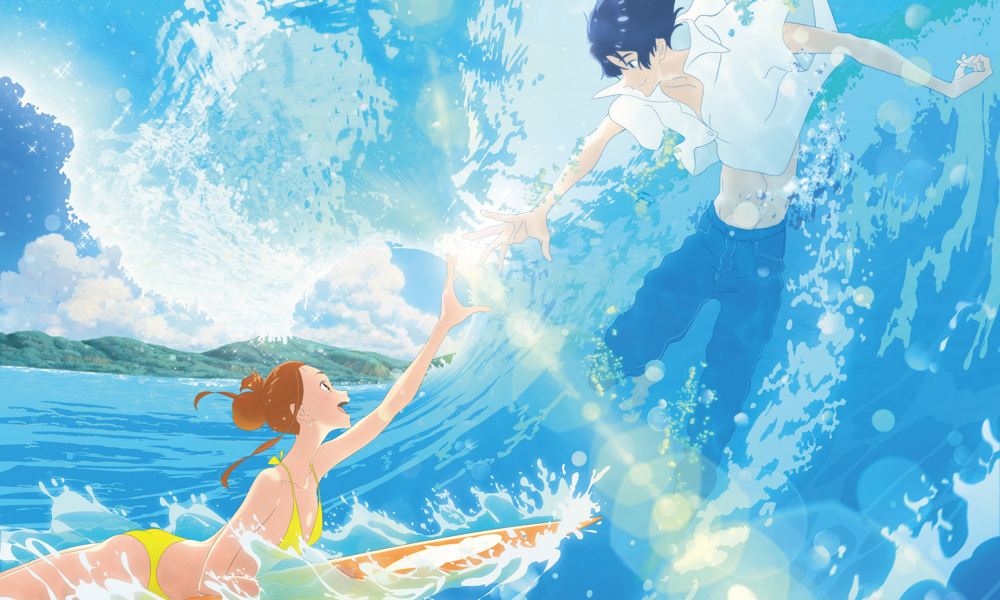 GKIDS has announced that Ride Your Wave, the deeply emotional new animated feature from visionary director Masaaki Yuasa (Night Is Short, Walk on Girl, Devilman Crybaby, Keep Your Hands off of Eizouken), will get a Los Angeles theatrical release on February 21. The LA engagement will follow a nationwide, one-night-only premiere event presented with Fathom Events on February 19.

Hinako is a surf-loving college student who has just moved to a small seaside town. When a sudden fire breaks out at her apartment building, she is rescued by Minato, a handsome firefighter, and the two soon fall in love. Just as they become inseparable, Minato loses his life in an accident at sea. Hinako is so distraught that she can no longer even look at the ocean, but one day she sings a song that reminds her of their time together, and Minato appears in the water. From then on, she can summon him in any watery surface as soon as she sings their song, but can the two really remain together forever? And what is the real reason for Minato’s sudden reappearance?

Theatrically, the film will be presented in both its original Japanese and new English dub versions.

Audiences at the English subtitled Fathom Events screening (Feb. 19 at 7 p.m. in more than 500 theaters) will also be treated to an exclusive interview with Ride Your Wave producer and Science SARU animation studio co-founder Eunyoung Choi (Night Is Short, Walk On Girl, Devilman Crybaby, Keep Your Hands off of Eizouken).

“We are thrilled to bring fans this joyous and touching feature from Masaaki Yuasa,” said GKIDS President David Jesteadt, “In this heartfelt tale of romance, loss, and self-discovery, Yuasa continues to expand on his distinctive artistic vision.”

“We are proud to once again join with GKIDS to bring a high-anticipated Masaaki Yuasa film to American audiences,” said Fathom Events CEO Ray Nutt. “Anime fans have enjoyed the GKIDS/Fathom partnership with such celebrated events as the annual Studio Ghibli Fest series, Promare, Weathering With You, and more.”

Tickets available at www.rideyourwavemovie.com, www.fathomevents.com and at participating theaters.