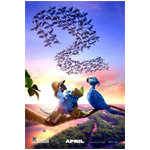 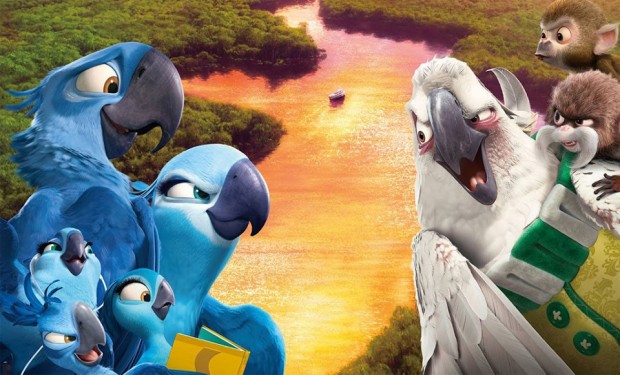 For Carlos Saldanha, the 2011 animated feature film Rio was a passion project — one that was a love letter to the city he was born and raised in. That the quirky tale of Blu, a stuffy domesticated blue macaw parrot who can’t fly and is forced to loosen up when a scientific trip to Rio de Janeiro goes awry, was a hit was an added bonus.

But not as much as the film’s sequel, Rio 2, which allowed Saldanha and the team at Blue Sky Studios to revisit the world of Blu, Jewel and their new family in an all-new stereoscopic 3D adventure due in theaters April 11.

“There was so much more that I wanted to do in the first movie,” says Saldanha, a native of Rio de Janeiro who came to the United States in the early 1990s to attend the School of Visual Arts in New York. “When you finish you have that feeling of, ‘I could have done this,’ and ‘I could have done that.’ And then this one it allows me to explore some of that.”

No stranger to sequels having shepherded Blue Sky’s Ice Age franchise since co-directing the first installment, Saldanha says the challenge for Rio 2 was to keep the story fresh and explore every aspect to take it to a new place.

“I think movies are about the journey of the characters and how you tell that story is how you keep it fresh,” he says. “That’s what I try to do with my movies, is try to make sure that I keep what works for the personalities of the characters from the first one and advance them or just do new things with them and the new characters that come along.”

Vanessa Morrison, president of Fox Animation, says that approach was very much in line with the studio’s plans for a sequel. “After the success of the movie, the question that Carlos had and that we had is: Are there more stories to tell with these characters? Are there more personal stories to tell with Blu and Jewel and are there more places to go with these characters?” says Morrison, whose purview includes Blue Sky Studios. “Carlos came to us with a resounding yes and really had constructed a vision of the story we wanted to tell.”

“I wanted a father was very powerful and strong and intimidating and I felt that Andy always had that presence for me,” Saldanha says.

For Roberto, finding the character was a process of discover for both Saldanha and Mars. “It was a hard character to cast because I didn’t quite have the character in mind,” he says. “When I saw Bruno on Saturday Night Live, I looked at him and I thought he had so much energy, he was funny, he had pathos — he had all those things I wanted to bring to the character, so I said, ‘Why not? Let’s give it a shot.'”

Roberto makes a rather dramatic and funny musical entrance in the movie, an idea that to get right required a little improvisation from Mars. “We had a first session with him and we recorded the script pages and it was fun and we got it, but then I kept feeling we’re missing something special,” says Saldanha. “When we came back for the next session, we talked a little bit about why don’t we try to add music to you as a character, a musical introduction that’s over the top and fun. And he was on board with it, he was ready to do it. And it took him an hour: He went outside, brainstormed a little bit and he sang that opening number and it was like his introduction and it was so funny.”

The actors returning to their roles benefited from familiarity with the terrain, which allowed them to focus less on defining their characters and more on exploring their interactions with the story and each other.

The story pushes the main characters into different directions. Blu and Jewel, who were revealed to have become parents in the final moments of the first Rio, find their relationship challenged by being parents, meeting Jewel’s family and the various dangers posed by their adventures in the Amazon.

Saldanha says those family dynamics create conflict between characters that is universally recognized. “It’s territory that we are all very aware of,” he says. “So it allows me to make the characters feel personable and allows you to create fun comedy at the same time.”

Coming only three years after the first Rio — “a fairly short period of time in animation terms,” Saldanha says — there were no huge or obvious innovations in the technology or animation techniques used to bring the sequel to life. Most of the innovation came in advancements in lighting made on Blue Sky’s previous feature film, Epic, and often are largely invisible in the finished product to most viewers.

“For example, for Rio 2 we had to re-rig all the character again,” Saldanha says. “We wanted the characters to be faster to animate. We wanted animators to have to spend less time having to move a point and spend that time acting for the characters. … Even though it was time consuming in the beginning, it allowed us to improve the animation.”

While the first Rio was set largely in the eponymous city itself, Rio 2 ventures to new territory, heading west from Rio de Janeiro into the Amazon rainforest. It was a journey Saldanha himself had to take first. “I had never been to the Amazon, so I wanted to have that experience myself. I wanted to see what inspires me about the Amazon, how does it feel to be in the Amazon,” he says.

The material was mostly personal reference for Saldanha, with the rest of the film’s crew relying on the ample reference work in books, photos and movies of what the Amazon looks like and how light plays off its features. (That wasn’t the only trip Saldanha took during the making of Rio 2. He also took three weeks vacation to shoot a short live-action segment for the I Love Rio project, and hopes to direct a live-action adaptation of the graphic novel Rust in the near future.)

The Amazon was the setting for some of the most complicated animation sequences in the film, including the reveal of the massive sanctuary for the blue macaws and a type of bird-style soccer match.

Also like the first film, Rio 2 is a stereoscopic 3D movie, though Saldanha says Blue Sky’s pipeline now incorporates 3D into the process so well that problems are caught early on the process is relatively routine.

With two films now complete, Saldanha says he would be happy to turn Rio into a trilogy if the opportunity presents itself. In the meantime, work is proceeding on his next animated Blue Sky feature, Ferdinand. “I do hope this movie is successful and that people will enjoy it and if so, we’ll deal with that when the time comes,” he says. “If it happens, great. If not, I’m very proud of what we’ve done so far.”