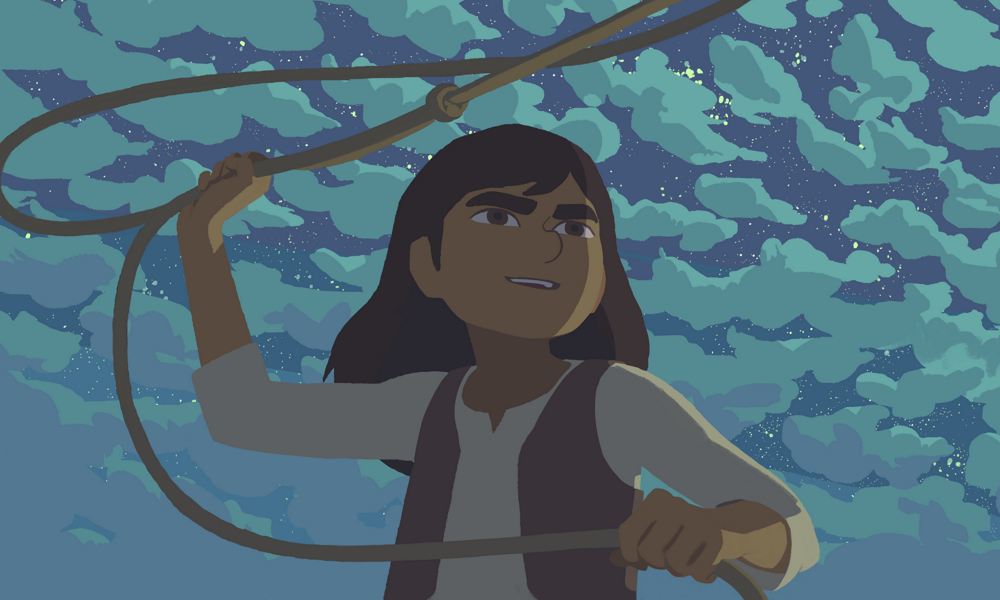 Four years ago, French helmer Rémi Chayé’s debut feature Long Way North dazzled audiences around the world and impressed critics. The beautifully visualized 2D movie centered on a feisty 19th century Russian heroine who went searching for her grandfather in the North Pole. This year, the talented director is back with another stunning animated epic set in the past: Calamity: A Childhood of Martha Jane Cannary charts the early days of the famous frontierswoman and professional scout as she has to take care of her siblings after her father is injured during their journey west. 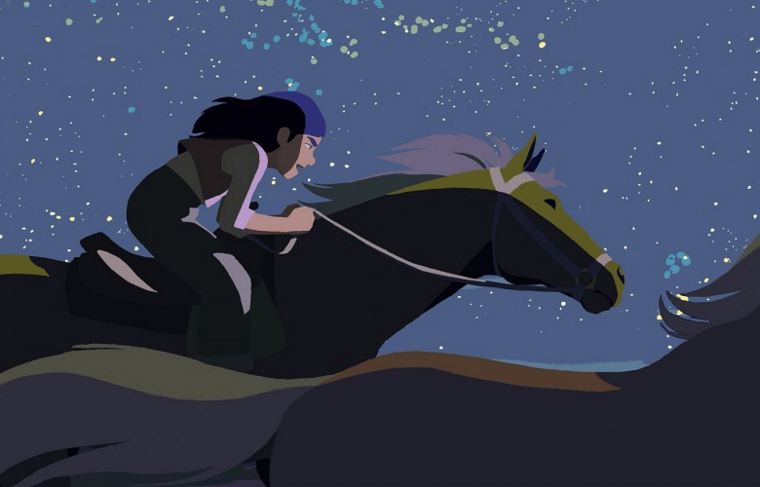 Chayé began looking for new ideas about five years ago, when he was about to finish his last movie. “I stumbled upon a documentary about Calamity Jane on the French TV channel Arte,” he tells Animation Magazine in a recent interview, ahead of the film’s sneak-peek at Cartoon Movie. “That’s how I discovered that Martha Jane Cannary, who would become Calamity years later, had travelled along the Oregon Trail and that she had learned a lot during those times. Hunting, riding horses, driving carriages; she had loved this period despite the recent loss of her mother. I started thinking: What if her father had had an accident and Martha Jane is driven into living a boy’s life? She discovers the freedom attached to it and never wants to give it back. That could be a good subject.”

That’s when Chayé asked collaborators Fabrice de Costil and Sandra Tosello to write a script based on the idea, and they presented it to the veteran producer Henri Magalon, whose credits include Ernest and Celestine, Zombillenium and Long Way North. “The idea for Calamity was born first and foremost from my desire (and the whole team’s) to go on a new adventure together. Long Way North had been an extraordinary experience for all of us — a film that had its share of challenges, but one that resulted in a collective outcome which we’re all very proud of.”

Magalon says he immediately saw the subject matter’s great potential: “A new, strong female character and an emblematic figure of the place of women in the modern world, Martha Jane Cannary, in my view, is the first famous actress in history. Before even the birth of cinema, she was able to invent her own legend through her ‘stage performances’ and her stories in a society which confined women to an established role. Without renouncing her femininity, she helped in opening mentalities to the prospect of seeing a girl be free, leading and independent.”

With an estimated $9.4 million budget, the movie, which is a co-production between Maybe Movies in France and Nørlum Studios in Denmark, took about six years to complete. The clean 2D animation, which incorporates few lines, was produced using Adobe Animate. The pipeline was created based on Adobe Animate from the storyboard stage to the final cleanup. “Calamity took us about four years less than the previous one,” says Chayé. “That’s pretty fast for a European animated film,” adds Magalon. “We spent three years on the story and the script before having any of our partners read it, and the main financing of the movie took only six months. After that, we had two years of actual production between graphic design, storyboard, animatic, animation, compositing, music and sound post-production. Everything went great among the different teams that were gathered firmly around a strong story.”

The producer mentions that the creative team around Rémi really gave it their all to realize his vision. “From script to animation, from junior to experienced artists, all associated talents demonstrated their commitment to the production each and every day. It should also be noted that, back in 2012, Rémi was the first animation director to insist on parity, requesting a recruitment at each qualification level of 50% women, 50% men. This was a major move at the time and remains a key creative improvement for all of us.”

Magalon says the innovative project involved a considerable amount of risk. “The movie is one of the most ambitious European independent productions of the moment,” he notes. “Risks were taken to complete the financing plan. We had to convince European partners to fully invest in our film in order to avoid being forced either to relocate part of the production to additional territories, and/or to reduce quality quotas. But the eminent family audience potential makes the adventure worth it, and we trust in our strategy to bring back such a fresh and wise tale both on domestic and international screens.”

The film’s highly stylized and impressionistic visuals had some interesting sources of inspiration. Chayé says he and the film’s color designer Patrice Suau (I Lost My Body, Long Way North, Les Lascars) looked at many of the vintage travel posters from the 1930s and 1940s. “These images had very saturated colors and dynamic simplifications,” explains the director,

who has worked on a wide range of animated movies, including The Secret of Kells (2009), Eleanor’s Secret (2009) and The Painting (2011). “Our biggest challenge was depicting the grandeur of the American landscape. Just as we did in Long Way North, we drew our characters with no outlines. The style is a little more realistic though, but the animation is still as simple as possible. We tried to evoke the most possible emotions with the least number of drawings.

The director points out that the challenges of making an animated feature are numerous, especially with a subject that stages a convoy of carriages, a community of pioneers, horses, dogs and many characters. He adds, “But the biggest challenge is to create a narrative and visual movement that grows from the beginning to the end and stops the audience from thinking about where they are.” 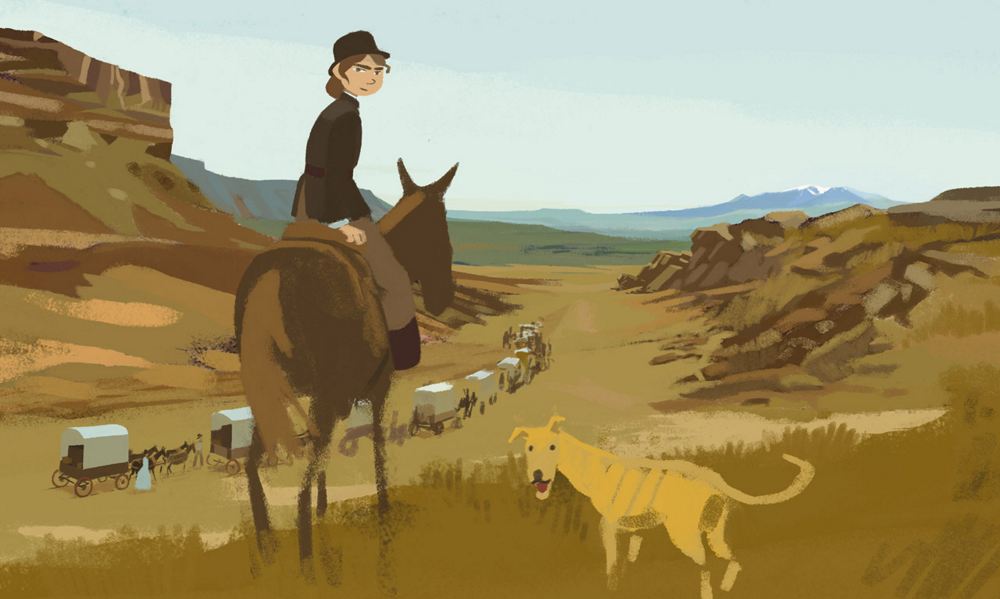 “Completing a 2D animated feature is more and more of a challenge these days, when 3D CGI has now become the main, if not the only, thing offered to kids,” says Magalon. “I would have to say that the thing I’m personally very proud of is this character-driven story of Calamity. It is a strong, yet simple adventure that I hope children and their parents will equally enjoy watching.”

Magalon mentions that because he also works on live-action features and documentaries, his producer friends in the industry are impressed that they handle such long production cycles in animation. “But they think that it’s easier for us because our scripts are aimed at children,” he says. “But in my experience, it’s the complete opposite, because kids are the most demanding audience in terms of story logic and character psychology. They are uncompromising on every detail and they want to understand everything. Moreover, we have an even greater ethical responsibility, because children discover values for the first time through animated films!”

Now that the film is about to arrive in cinemas this spring, Chayé has high hopes for his feisty Western heroine. “Our movie is about a girl that crosses the cultural fence between genders,” he concludes. “It’s also about the price she pays for doing so. It’s a movie that says that you don’t have to be defined by the strict traditions and gender stereotypes associated with being a girl. I hope that the public will leave the theater feeling that they have actually met Calamity Jane and know a lot more about this fascinating figure.”

Calamity: A Childhood of Martha Jane Cannary will have a sneak preview at Cartoon Movie in Bordeaux in March. The film will be released later this year in France by Gebeka. It is produced by Maybe Movies and Nørlum, and co-produced by 2 Minutes, France 3 Cinema and 22D Music Group. 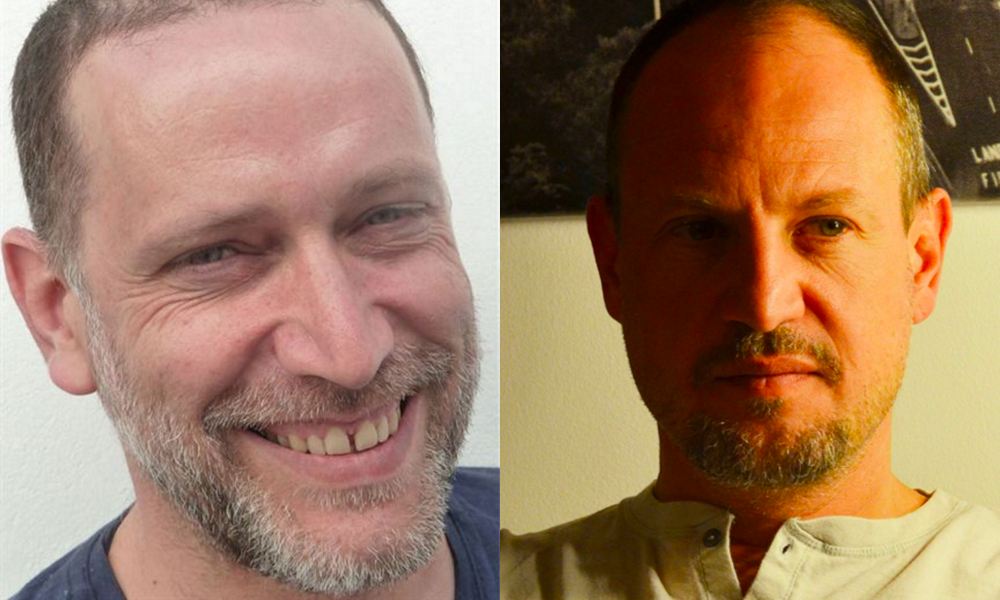