This week’s news of looming layoffs at DreamWorks Animation and the delayed release of Mr. Peabody and Sherman (from Nov. 2013 to March 2014) is taking its toll on the studio’s stocks. Variety reports that DreamWorks Animation stock closed down 67¢, or 3.8%, to $16.75 in trading on the New York Stock Exchange on Wednesday. The company will report fourth-quarter earnings on Feb. 26.

Of course, this means there will be more pressure on the performance of DreamWorks’ 2013 releases The Croods and Turbo, which will be released by Fox on March 22nd and July 29th respectively.

“We believe the best strategy for DreamWorks Animation in the long run is to ensure that every one of our films has an optimal release date with the biggest opportunity to succeed at the box office,” said studio CEO Jeffrey Katzenberg. “The move of Mr. Peabody & Sherman means that we will now release two films in 2013, and we are adjusting our operating infrastructure costs accordingly.”

Deadline.com reports that DreamWorks Animation may cut up to 500 employees in the next few months as the result of the disappointing performance of the studio’s holiday release The Rise of the Guardians. 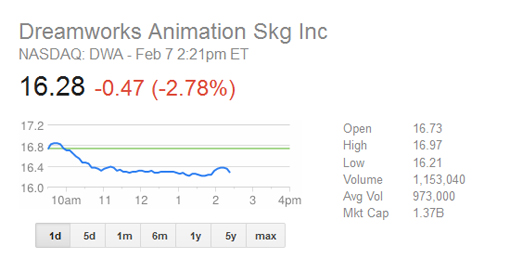 You may also like...
Related Topics:DreamWorks, DreamWorks Animation, Jeffrey Katzenberg, Mr. Peabody and Sherman, New York Stock Exchange, The Croods, The Rise of the Guardians, Turbo

Focus, LAIKA Reunite for ‘Boxtrolls’ in 2014
Iron Man the First (and Cheapest)