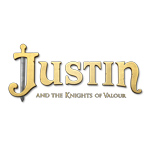 Kandor Graphics’ Justin and the Knights of Valour delivers a charming adventure set in an enchanted kingdom.

After a summer packed with animated movies about racing snails and goal-oriented planes, the new feature from Spanish studio Kandor Graphics is offering a very nice change of pace. The company behind the 2008 feature The Missing Lynx and the Oscar-nominated short The Lady and the Reaper (La Dama y la Muerte) is hoping to woo global audiences with its latest effort, a stereoscopic 3-D feature titled Justin and the Knights of Valour. The charming medieval tale centers on a young boy (voiced by Freddie Highmore) who dreams of becoming a knight like his grandfather. When a banished former knight (Mark Strong) returns to threaten the kingdom, Justin has to find the courage to face the enemy and prove himself worthy of knighthood.

The film’s director Manuel Sicilia, who also co-directed The Missing Lynx, tells us that Kandor had always wanted to produce a classic CG-animated movie for global audiences.

“Once upon a time in a kingdom far away, that would be Spain, there was a little company that wanted to do international animation projects, something that was really difficult and improbable,” he says. “The idea of doing this film was with us from the beginning.”

Sicilia says he is very happy that the studio had several big projects under its belt before it embarked on the movie.

“We created the studio’s procedures and pipelines for The Missing Lynx and we really learned how to work as a team. It was the perfect training to tackle something of Justin‘s magnitude.”

The director points out that many of the recent crop of animated features seem to be similar to each other, so that they become indistinguishable from one another.

“We tried to do something different, the movie has a ‘classic touch’ that is justified because the character of Justin misses the old times of magic and adventure in a world that is becoming too modern and too full of laws,” explains Sicilia.

One of the team’s key goals was to produce an adventure movie with comedic touches, similar in tone to family favorites such as Raiders of the Lost Ark or The Goonies. They opted for mixing humorous situations within a solid structure and using strong character developments.

“We wanted audiences to be able to really connect with the main character and his motivations, and I think the film is very moving, largely thanks to its incredible cast, which includes Freddie Highmore, Saoirse Ronan, Antonio Banderas, Alfred Molina, Julie Walters, Mark Strong, Charles Dance, Olivia Williams, James Cosmo, Rupert Everett and David Walliams.”

Produced with a 22 million euro budget (approximately $29 million), all the animation was produced at Kandor Graphics in Granada, Spain. According to Sicilia, all the work on the movie—from storyboarding to color grading and stereoscopy—was done in house. The film’s score was composed, produced and recorded in the U.K. at the Abbey Road Studios.

Francesca Nicoll, who served as executive producer with Sarah Arnott and Kerry Fulton (Antonio Banderas, Marcelino Almansa, Ralph Kamp and Fulton are the film’s producers), says she’s quite pleased with the way the film’s financing came together.

“The film has been co-produced by Spanish production company Aliwood Mediterraneo Producciones, and has public funding support, mainly from regional funds from Andalucía,” she explains. “Thanks to Ralph Kamp’s company Timeless Films’ fantastic job selling the film internationally, and the fact he came on board early and was able to give us invaluable input, the film was also pre-sold widely, which helped a lot.”

Nicoll says during peak times in the production, there were about 150 staffers working on the movie. Many artists from the Granada region worked on the movie, especially in the art and color departments, since the city has a long-standing tradition in those areas.

“But we also had animators, lighters, composers, etc. from 10 different European countries,” she adds. “It was great to walk down the corridor and hear a mixture of Spanish, Italian, French and English spoken.”

Among the film’s many challenges was creating a rich, complex and believable world, which supported the central tale of a boy’s transformation to a knight and a man. Sicilia says this kind of personal growth goes hand in hand with what you see and discover since the audience needs to believe that a clumsy boy can evolve into a hero who can face the fearsome villain of the movie, Heraclio.

“The amount of technical and artistic work required to create all those sets—forests, buildings, villages, lakes—was enormous,” notes the director. “Especially because in the movie we actually have two different worlds: the world of Knights and the world of Lawyers, each of them with different designs, color schemes, modeling style and even different kinds of cameras. It’s as if you mixed the Errol Flynn version of Robin Hood with Terry Gilliam’s Brazil. I think audiences are also going to be impressed by the work our lighting team did on the movie. They did an amazing job in a very short time.”

Sicilia says the studio was ready to tackle this ambitious project thanks to a new animation and rigging system that provides the animators with the necessary tools to create expressive animation. The new Arnold-based lighting system also allowed the lighting team to work faster and deliver better quality. The production was made with XSI and rendered with Arnold. The production also used 3ds Max, Nuke, After Effects and Mistika (for color grading).

“Now we can finally work with hair, clothes and effects in a much more powerful way,” he says. “These are capabilities we didn’t have on our previous movie.”

Both Sicilia and Nicoll are quite pleased with the worldwide audiences’ endless appetite for animated fare.

“Although some films have suffered from the frantic summer schedule, but then again, when you look at Despicable Me 2‘s numbers right now, if it works, it works,” notes Nicoll. “We can’t compete with those kinds of campaigns, but we are very happy with our dates and how our distributors are designing their launch campaigns.”

The producer points out that the animation industry in Spain has always had a measure of success, both in features and in TV series, thanks to the country’s talented professionals and the experienced studios. She also mentions the huge success of last year’s Tadeo Jones (Tad the Lost Explorer) which became the country’s most popular animated feature of all time, grossing over $24 million in Spain alone.

“With the state of the box office here, those are amazing numbers,” says Nicoll. “This year it’s our turn, hopefully!”

Sicilia, who is a big fan of Disney features from the 1980s renaissance, such as The Lion King and Aladdin, as well as Hayao Miyazaki’s masterpieces, says he was fascinated both by the animation process and the way the stories were constructed in those classics.

“I’ll never forget the day I saw Toy Story for the first time,” he recalls. “I saw that movie five times. I was studying computer engineering at the time and I was blown away—animation and CG together…in a feature film. From that moment on, I have admired Pixar. It’s incredible how each year, they continue to have success after success. I also have great admiration for Brad Bird’s movies: The Iron Giant, The Incredibles and Ratatouille.”

The director is quick to add that his team’s influences are not limited to the animation realm. He says he cherishes many of the movies from the ’70s and ’80s.

“During that period, you could find wonderful movies that treated children like adults, and featured heroes that were funny and charming—very different from the ones we see in today’s movies. I still remember the day I saw Raiders of the Lost Ark. I was 10, and was so impressed, that maybe that was the reason I thought of making movies as a possible career.”

Since Sicilia has two major animated features on his impressive resume, we asked him to leave us with some words of advice.

He replies, “I think the most important thing, no matter if you want to be a director, writer, animator, storyboard artist or whatever; is to have a strong basis of storytelling. Besides the skills of your particular position, you’ll need that, because in the end, your job is to help to tell a story … If somebody spends 90 minutes of his life in a dark room watching a screen, it’s because he is worried about what is happening to that boy or that girl. Now 2 million extra polygons or 4 million hair strands will make the movie much more beautiful, but can’t save a story that doesn’t work!”

Justin and the Knights of Valour opens in theaters in the U.K. on September 13 and in Spain on Sept. 20. The film will continue to debut around the world through the rest of the year.