Cartoon Network has announced it will release the first-ever full length feature based on J.G. Quintel’s Emmy-winning comedy Regular Show: The Movie via electronic sell-through and DVD prior to its TV premiere this fall. The epic animated adventure will follow Mordecai and Rigby as they accidentally create a “Timenado” and have to go back in time and battle an evil volleyball coach in order to save the universe … and they’re friendship.

The 70-minute movie, produced by Cartoon Network Studios, will be available for digital download on September 1 on platforms including iTunes, Google Play, Amazon Instant Video, Xbox, Playstation, VUDU and more. As an added perk, the digital release will also offer an assortment of bonus content and discounted Regular Show season sets for a limited time.

The DVD release, coming October 13 from Warner Home Video, will include over an hour of exclusive bonus materials including original storyboard pitches, animatics, art galleries, trailer and commentary with Quintel and supervising producer Sean Szeles.

Mordecai (voiced by series creator JG Quintel) and Rigby (William Salyers) are two slackers who work in a city park. When a spaceship from the future crashes in front of them, an intergalactic warrior warns that a Timenado is on the verge of destroying the universe, and they’re the only ones who can stop it. Mordecai and Rigby will have to go up against their old high school principal, an evil volleyball coach, and even their high school selves in the most epic job of their lives. With the help of High Five Ghost (Quintel), Muscle Man, Pops, Benson (Sam Marin) and Skips (Mark Hamill), can Mordecai and Rigby save the universe and keep their friendship intact? 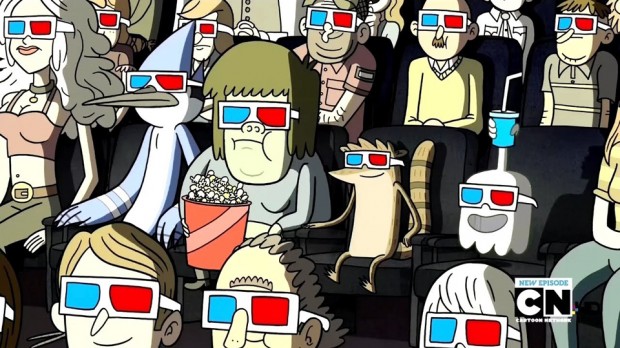