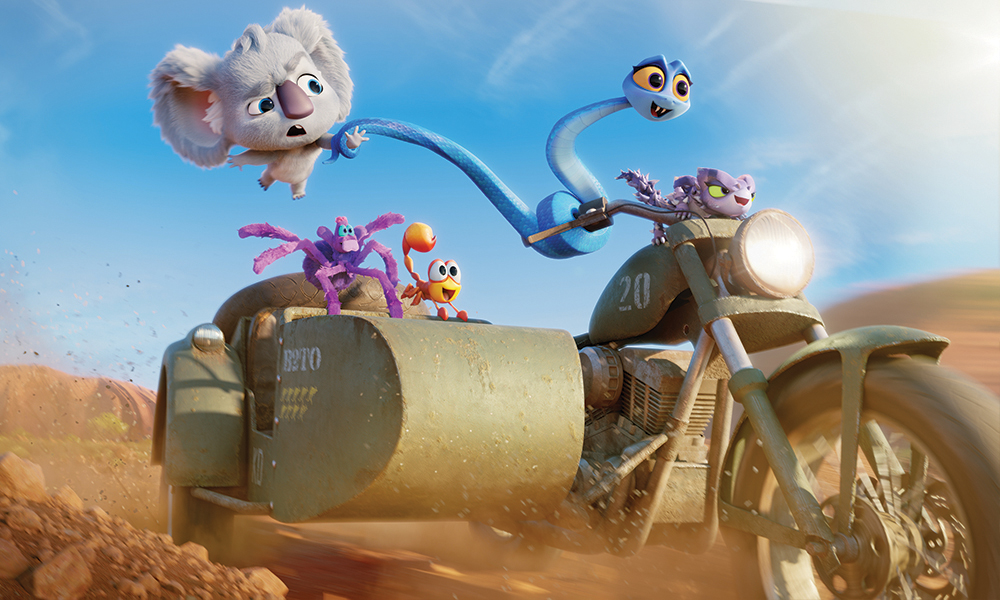 You might think that a fuzzy, adorable koala makes for a natural hero and that a scorpion or a snake with deadly venom would be a ringer for a villain — but in Back to the Outback, appearances can often be deceiving. 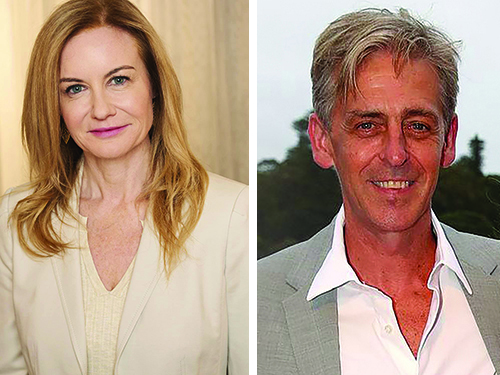 Directors Clare Knight (editor on DreamWorks’ Kung Fu Panda films) and Harry Cripps, who also wrote the movie. had something very different in mind when they put together the main characters that go on a journey through the Australian Outback in the new Netflix movie.

“The idea actually came through our producer Greg Lessans,” says Cripps. “Here in Los Angeles, he took his children to the Natural History Museum for the opening of the butterfly enclosure. When he got there, the kids weren’t interested at all in the butterflies, they wanted to see the snakes and spiders. So, he thought it would be cool to make a movie where it’s those guys that are the heroes. And that naturally led him to think Australia would be a great setting for this, because Australia, as you know, has some of the most famously cute animals in the world like koalas, but it’s also known for having some of the deadliest snakes and spiders, lizards, sharks, crocodiles.”

Knight says the producer talked to her about the idea. “I loved it, because I obviously grew up in Australia with a lot of those animals in the Blue Mountains and in Sydney, which are featured in the film,” she notes. “I grew up with snakes and lizards and everything inside and outside of the house and sharks at the beach. The idea of doing a film that focused on them as the heroes and made them the good guys was really appealing. I loved it.”

Early on in the creative process, the filmmakers did question if animals that creep people out on a regular basis would make the best protagonists. However, they quickly realized that it seemed like a great way to talk to kids about accepting others who might seem unusual at first.

“We started out with a room full of all these pictures; photos of snakes, spiders, sharks and everything,” says Knight. “And you’d find that people would come in and they couldn’t even look at a snake or a spider because they have such phobias. So, it was early on that we questioned whether our lead should be a snake. But I think we wanted that challenge, it was kind of something that we definitely wanted to do. I came off the Kung Fu Panda movies, and I knew that it was a complication.”

Knight points out it is quite difficult to animate the movements of a snake. She adds, “But we really wanted to take on that challenge and we also wanted to have a way of having her be something that people admired. To us, she’s like a teenage girl who’s kind of embarrassed by her braces, and she’s blossoming as this journey goes forward. So, we worked with Jesse Aclin, who was a really great character designer. I remember we saw a lot of great work on his Instagram. We really felt he came up with some beautiful designs for us.”

Back to the Outback also stars Eric Bana as zookeeper Chaz and 10-year-old actor Diesel La Torraca as his “mini-me,” Chazzie.

Eventually, the movie’s main characters became Maddie, a poisonous snake, a Thorny Devil lizard named Zoe, a very hairy spider called Frank and a scorpion who goes by the name of Nigel. They’re also joined by a celebrity koala named Pretty Boy, who can’t help but be obnoxious. The animals are voiced by some formidable talent, including Guy Pearce, Isla Fisher, Miranda Tapsell, Tim Minchin and Angus Imrie, with Eric Bana on their tails as zookeeper Chaz.

Of course, due to the pandemic, actors couldn’t come into a studio and had to find ways to record in a quiet space in their homes. “We were worried at the beginning because sound quality is most important, and this is going to be generally the recordings you do in these studios for your final recordings,” says Knight. “So, we were kind of trepidatious about it, but I felt like we’d sent out these kits and pretty quickly we found that, as long as you were in an environment that’s got clothes around it, you could get good quality — and we were very fortunate that that happened. And we really wanted it to be the Who’s Who of mostly Australian talent, you know, them with their voices, because our animals are very pushed stylistically. So, we wanted the natural voice to come out of them.”

The filmmakers also had to shelve any idea of traveling to Australia for research due to the pandemic’s travel restrictions. Usually, the production designer and other crew members would head off on a research trip to become immersed in the environment. In this case, they relied on extensive photographic research of the areas where the film takes place and went from there to create their own Australia.

The animation team was made up of an international crew located all over the world. Reel FX in Dallas and Montreal completed almost all the animation with assistance by the film’s animation consultant Michael Greenholt, based in Los Angeles. Studio Gilay in Sydney completed a 2D flashback sequence. All told, more than 130 animators worked on the film.

“The message that really came out of this was the idea that you can’t really judge a book by its cover and that these animals are misinterpreted, and maybe we shouldn’t be as divided or judge each other the way we have in the past,” says Knight. “I mean, I grew up in Ireland where there are no snakes because St. Patrick got rid of all of them, which I feel is an odd thing to do because they’re very cool. But they are misunderstood, and I think it was a great idea when it was pitched because kids don’t usually get to know these kinds of animals like a Taipan [snake] or a spider. It might pique their interest in them because they’re really unusual types of animals that are fun to see.”

The filmmakers found a lot to love and animate with their unusual main characters. Each species had its own set of behaviors that could be used to make them more endearing.

“We wanted to lean into the natural characteristics of these animals — like, spiders really do mating dances, and they can look really weird and creepy when they do them,” says Cripps. “We wanted to use that and bring that into Frank’s character to show him as this very awkward teenage boy who’s just not quite comfortable in his body yet, but he’s trying to get it all together and he wants a girlfriend.”

The same principle was applied to the Zoe character and her camouflage and spikes. “We wanted to use those things that are natural in the Thorny Devil lizard to give her this characteristic of this sort of gothic character, who’s this great escape artist,” notes Cripps. “So, she’s the smart one, you know. And as Clare was saying, with Maddie and her fangs, drawing the analogy with a teenage girl and the braces. So, it was about bringing in some of the natural characteristics to help humanize them and make them relatable and, at the same time, keeping those characteristics, because kids are fascinated with those kinds of animals.”

Back to the Outback premieres on Netflix on Friday, December 10.