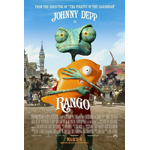 A new trailer for Rango has hit the net.

The CG-animated film is directed by Pirates of the Caribbean’s Gore Verbinski, who continues the trend of live-action directors crossing over into animation, and features the voices of Johnny Depp and Bill Nighy. The film is being produced by Nickelodeon Movies and distributed by Paramount for a March 4 release.

What do think? A refreshing drink of water or a movie that hits a dry patch?