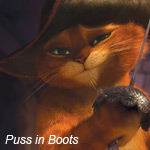 While Twilight Breaking Dawn, The Muppet Movie, Hugo and Arthur Christmas and Happy Feet Two were entertaining movie audiences in the U.S., Paramount/DreamWorks’ feisty feline Puss In Boots performed quite well overseas, landing in the No. 2 spot (after Twilight) with $23 million from a total of 2,740 venues in 26 markets. The grand total for the 3D Shrek spinoff is now $89.2 million. The film will open in 16 more territories this week including the U.K., Germany, Australia, New Zealand, Belgium, Brazil and Venezuela.

Here is a quick look at how some of the other animated titles performed both stateside and overseas this weekend: