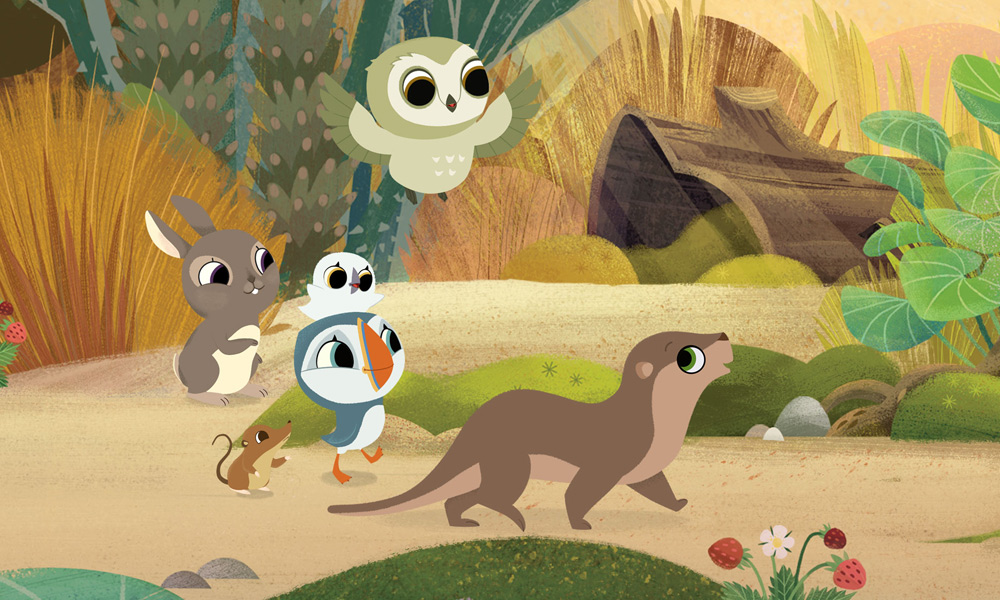 As the acclaimed children’s preschool brand Puffin Rock enjoys continued success around the world, its co-owners — Cartoon Saloon, Penguin Books and Dog Ears — have announced the production greenlight for the Puffin Rock Movie. The latest adventure for the charismatic little seabirds will be the first animated feature produced in Northern Ireland.

The award winning preschool TV series Puffin Rock (2 seasons, 79 x 7’) enjoys international success, receiving an International Emmy nomination, two Kidscreen Awards and a Royal Television Award, and has been a huge hit with preschool audiences. Puffin Rock has been acquired by various international broadcasters including a global deal with Netflix, and a Chinese acquisition by China Nebula Group (CNB). Puffin Rock is available on Tencent in China, where it has been streamed over 170 million times.

The movie sees the heroic Oona work with her friends to save their island, and a precious little egg, in an action-packed story which celebrates the puffins’ magnificent natural environment, and features themes of belonging, courage and friendship. The Puffin Rock Movie is a huge boost to the growing brand and also marks a new co-production partnership with CNB. The film will be produced across three locations – in Dog Ears studio in Derry, in Cartoon Saloon in Kilkenny and in China Nebula Studio in Tianjin in China – due for release in the Spring of 2021.

“I am very honored to participate in this wonderful family film together with the world’s leading 2D animation team. As a big fan of Puffin Rock myself, I can’t wait to meet the little puffin and her friends on the big screen as soon as possible,” said CNB CEO Axinaer.

“We’re delighted to announce the production of the Puffin Rock Movie and to welcome our new partners Chinese Nebula Pictures on board. We’re very excited about the movie and have big hopes for it reaching family audiences across the globe,” said Fionnuala Deane, MD of Dog Ears.

“I’m very happy that we are able to begin work on our Puffin Rock feature with our brilliant partners Dog Ears and China Nebula Pictures. There are a lot of kids hungry for some more adventures with Oona, Baba and Friends and we don’t want to let them down! Our movie has lots of laughs and thrills for younger viewers and for many we expect The Puffin Rock Movie will be their first cinema experience!” said Paul Young, CEO of Cartoon Saloon.

Richard Williams, CEO of Northern Ireland Screen, said, “We are thrilled that the Puffins are migrating to the big screen. Northern Ireland Screen has long been enthusiastic supporters of Dog Ears, they are a hugely talented and highly driven team working at ease alongside major global names in children’s programming. It comes as no surprise that they are behind the first animated feature film to be made in Northern Ireland. This news speaks volumes for the growth and future potential of the animation sector here. We wish Dog Ears every success as they embark on this exciting project.”

James Hickey, CEO of Screen Ireland, said, “Fís Eireann/Screen Ireland is thrilled to be part of the Puffin Rock Movie, and to support Cartoon Saloon on yet another feature-length animation project, as it has grown into an internationally acclaimed powerhouse animation studio, marking another wave of success for the Irish animation industry. Screen Ireland has been proud to support the original TV series of Puffin Rock, and its continued international success and acclaim highlights the range of creative talent across Irish storytelling and animation, both North and South. This move to the big screen will be a fantastic opportunity for children everywhere to engage with these already much-loved characters and stories.”