Studio Ghibli’s iconic Princess Mononoke from writer/director Hayao Miyazaki is returning to movie theaters for two nights only in celebration of the film’s 20th anniversary, and Miyazaki’s birthday. Lauded by Roger Ebert in 1997 as “a great achievement and a wonderful experience, and one of the best films of the year,” Princess Mononoke: 20th Anniversary will run subtitled on Thursday, January 5, 2017 at 7 p.m. and English-dubbed on Monday, January 9, at 7 p.m., presented by GKIDS, in partnership with Studio Ghibli and Fathom Events.

This will be the second collaboration between GKIDS and Fathom Events.

The first, a 15th anniversary screening of Spirited Away, grossed $800,000 its first night (a third screening on Dec. 8 has been added!).

“Twenty years after its release, Princess Mononoke remains an undisputed animated triumph and one of the most thrilling adventures ever produced,” said GKIDS’ President Eric Beckman. “Following the great success of Spirited Away returning to theaters, we are excited to present ‘Princess Mononoke’ in a theatrical setting to fans both old and new. It’s also a fitting way to celebrate Miyazaki’s birthday as we remind ourselves of the cinematic gifts he has given audiences over the years.”

In addition to the film, moviegoers will be the first in North America to see the 1995 Miyazaki-directed music video for Japanese rock duo Chage & Aska’s “On Your Mark.” Tickets are available through FathomEvents.com.

Princess Mononoke unfolds as Ashitaka, a young warrior inflicted with a deadly curse, heads into the forest in search of a cure. There, he meets the enigmatic Princess Mononoke, a young girl raised by wolves, who will stop at nothing to prevent the humans from destroying her home, and the forest spirits and animal gods who live there. 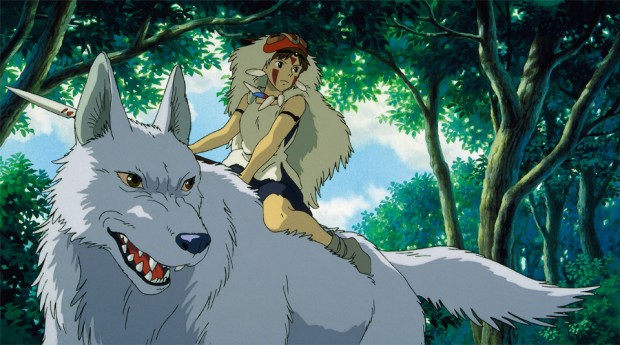