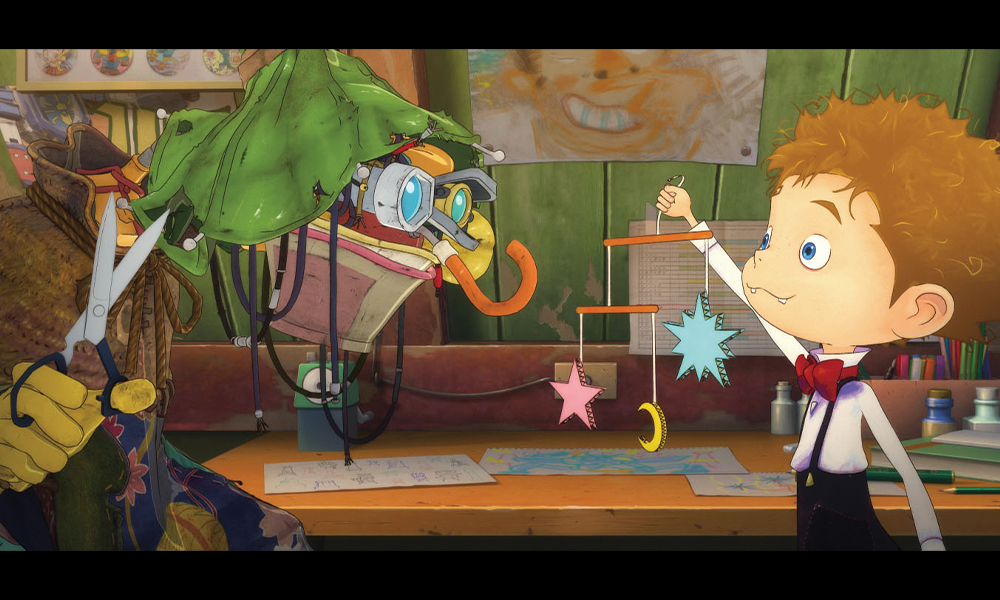 Bringing any well-loved book to screen presents challenges, but Akihiro Nishino, who wrote the popular children’s book Poupelle of Chimney Town (which has been translated into English, but is currently out of print) also wrote the script and served as executive producer on the animated adaptation. He notes that his story has already been presented as a stage play, a musical and a Kabuki play.

“The visuals change each time we reimagine and present the story anew,” Nishino says. “I think it’s marvelous for the visuals to change according to the characteristics of each medium. For our animated film, I decided to use imagery that ensured that the action would be unique.” He also cites the films of Tim Burton and Sylvain Chomet’s The Triplets of Belleville as influences on his work.

Directed by Yusuke Hirota, Poupelle of Chimney Town is the first 3D CG feature from Studio 4°C, known in the U.S. for such off-beat films as Katsuhiro Otomo’s Memories (1995), Tekkonkinkreet (2006) and Children of the Sea (2019). Poupelle offers striking visuals that incorporate both Western and Japanese aesthetics. Some of the key artists from the film discussed their work in a recent interview conducted via email.

Chimney Town is perpetually shrouded in smoke: the ruling elite fear the sight of the stars might incite the inhabitants to rebellion. At times, the gritty, fuliginous city recalls Sherlock Holmes’ London, swathed in Victorian fogs (which were really smog).

Art director Kenichiro Akimoto comments, “While following the images in the original picture book, I created the backgrounds and foregrounds keeping in mind that the silhouettes of the buildings must always stand out to preserve a sense of depth, even though they’re clouded by smoke. By adjusting the colors according to the time of day, we devised a way for the audience to feel the passage of time in a place where the sun is blocked.“

“When I added smoke to the CGI elements, I didn’t want the screen to look blurry and white,” adds CG director Takanori Nakashima. “Rather than adding smoke to the entire screen, I focused on areas around light sources, such as street lights. If you can recognize smoke moving around a light, you feel smoke is present in the entire area.”

The hero of the film is Lubicchi (voiced by Antonio Raul Corbo in the English-language version), a diminutive chimney sweep who’s regarded as an oddball by the other inhabitants of Chimney Town. Lubicchi’s father, who disappeared years ago, said he once saw stars above the smoke. Lubicchi believes his father’s story; everyone else dismisses it as a crackpot fantasy. But when Lubicchi loses a treasured locket of his father’s, it brings an assemblage of discarded objects to life: Poupelle (Tony Hale). He and Lubicchi bond as they and a few friends attempt to prove the existence of the stars — and the world beyond Chimney Town.

“The soot emitted by the chimneys pollutes the town — to give the characters a sense of belonging in that world, I needed to use textures,” says Hirota. “Lubicchi needed to be dirty with soot and Poupelle is composed of discarded trash. However, if the textures were too strong, they would look artificial, so the final result is balanced with the traditional cel look.”

In the original illustrations, Lubicchi’s head is nearly spherical; his oval eyes are so widely spaced, his expressions would be hard to animate. Character designer Atsuko Fukushima explains, “This job started when a drawing I did won a competition. Nishino thought it wouldn’t be a problem to change the design of the characters for the movie, so we worked together from the picture book and my competition drawings.”

Even modified, Lubicchi’s wide face with its small, round eyes and little nose posed challenges. Character director Chiaki Imanaka adds, “Because his face is simple and cute, the slightest misalignment can change his appearance. I adjusted the expression around the eyes, the shape of the cheeks and the position of the front teeth to make his face look like Lubicchi’s from every angle for every scene.”

Like Charles M. Schulz’s classic Peanuts characters and Edna Mode in The Incredibles, Lubicchi’s diminutive stature also presented difficulties. “Lubicchi walks with a quick turn of his feet without bending his knees much, expressing the cuteness of a small child,” says animation director Yuta Sano. “When he walked with other characters, we had to adjust his movements to match their speed. In the scenes where Poupelle and Lubicchi walk down the tunnel, they’re both tired, but Lubicchi has to move his legs faster to keep up with Poupelle. His fatigue is expressed by his upper body posture.”

Poupelle is an ungainly assemblage of trash and discards, but the filmmakers imbue him with an ingenuous, often bewildered charm. The threadbare bits and bobs that make up his anatomy reflect an important element in Japanese aesthetics. Wabi-sabi incorporates objects that are worn and a bit shabby, that reflect the touch of the people who once owned them. Tea masters favor rough-hewn Raku pottery bowls over exquisite porcelain cups because they suggest humility and offer a melancholic reminder of the transience of life and beauty.

“What we call ‘garbage’ is composed of things someone used to cherish,” Nishino reflects. “In other words, a ‘garbage man’ is a collection of things that people once cherished, then somehow came to terms with and threw away. To those who have come to terms with their garbage and discarded it, Poupelle the Garbage Man’s existence is completely insignificant and alien.”

Creating a recognizable character who is also a believable scrap heap was no easy task; the ramshackle ambulatory structure in Hayao Miyazaki’s Howl’s Moving Castle is about the only comparable anime visual. Fukushima said she drew partial inspiration from the complex costumes the Yoruba people of Nigeria create for the Egungun festival.

“Although the character is a combination of many things, it’s not hard to identify human characteristics in the animation because the body parts are designed to be recognizable,” explains Sano. “But if we had tried to make Poupelle look too human, he’d look like someone wearing a costume. The challenge was to create the movements of a ‘garbage man’ who’s human-like but isn’t human.”

“I also wanted to express Poupelle’s character development in the film through his movements,” Sano continues. “In the first half of the film, when Poupelle has just been born, each part of him moves as if it were independent. But as the story progresses and Poupelle’s bond with Lubicchi deepens, Poupelle’s disconnected movements come together to make him look more human. Adjusting the movement that way was difficult, but it was the part I was most particular about.”

Reflecting on the creation of the film and its message of mutual respect and acceptance in a fractious society, Nishino concludes, “I sincerely hope that one day soon, we will be able to understand why people attack others, and that this understanding will lead to a future where other people’s dreams are supported and encouraged much more than they are now.”

Eleven Arts will release Poupelle of Chimney Town on December 30.

Impressions of a Lifetime: Erick Oh Sets a Scene from ‘Namoo’
Conjuring Visual Magic: ‘The Wheel of Time’ Delivers an Epic Fantasy in VFX