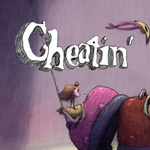 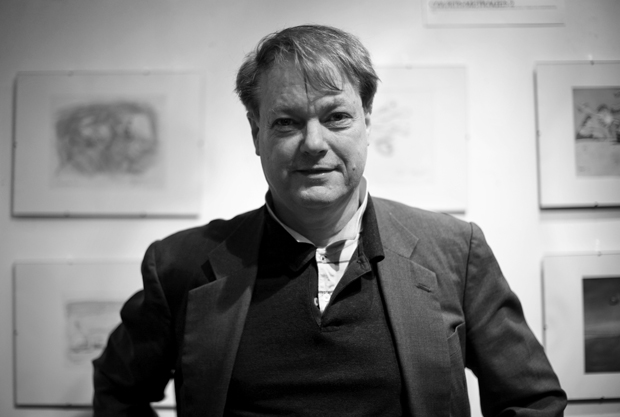 If any contemporary animator could be said to embody the indie filmmaker spirit, Bill Plympton would be a prime candidate. With his signature hand-drawn style and adult, iconoclastic themes, Plympton offers a bracing antidote to the 3D family films that comprise most of today’s animated fare. “I love Hollywood films,” he asserts. “I just want to see more variety.”

Plympton’s latest effort to fulfill that desire is his seventh feature, Cheatin‘, made with a 10-person crew at his Plymptoons Studio in NYC. “It’s a love story gone wrong,” explains the writer-director, speaking over the background wails of city sirens and his newborn child. Inspired by the noir sensibilities of novelist James M. Cain (The Postman Always Rings Twice), Plympton spins a tale – using no dialogue – of a husband’s infidelity and a wife’s creative solution. “The wife is able to transport her soul into the bodies of the floozies he’s having affairs with. She gets to enjoy the love of her husband, yet he doesn’t know that it’s his wife he’s making love to. It’s definitely not a kid’s film!”

“It’s my dream that people will see this as part of a genre that hasn’t been successful since Ralph Bakshi,” says Plympton, referring to Bakshi’s 1972

X-rated hit Fritz the Cat. “There have been a few European films, like The Triplets of Belleville, but I think there’s a need for an American film that addresses this huge vacuum. In this day of graphic novels and animated TV shows that speak to adults, why can’t we have animated adult films?”

Plympton found agreement for this attitude among many animation fans when he made a pitch to fund Cheatin’ on the crowd-sourcing site Kickstarter. “Our goal was to raise $75,000, and we raised an extra 33 percent. Our staff worked overtime, so that money was gone very quickly,” he admits. “The film eventually cost a half-million dollars, which is pocket change in Hollywood.”

Cheatin‘ wasn’t the first project Plympton brought to Kickstarter. In 2011, he raised funds there for his restoration of Windsor McCay’s 1921 animated classic The Flying House. Typically, Plympton has financed previous projects by using income earned from doing animation for commercials and series like The Simpsons. But the multi-layered 2D animation process he envisioned for the 40,000 drawings in Cheatin’ would be uncharacteristically labor-intensive, and his Kickstarter video pitch made a point of explaining that.

Plympton credits producer Desiree Stavracos and art director Lindsay Woods with coming up with a look that suggested mottled watercolors. “Even though we had to hire a bunch of artists to create that look, I was so enamored with it that I thought, ‘What the hell, let’s spend a few extra bucks!'”

As Woods explains, “Bill did the pencil artwork, which was scanned, and then the whole thing was colored in Photoshop in separate layers. Those were then composited in After Effects. Wherever we had the opportunity, we used After Effects to implement camera movements to give it three-dimensional depth.” To burnish the look with a vintage-film glow, Stavracos then applied After Effects to the entire film.

While this qualifies as the biggest “digital assist” used in any of Plympton’s films, he notes that the look actually brings him full circle to the style he used when he began his career as a magazine illustrator. “My illustrations were watercolor mottling. Winslow Homer and N.C. Wyeth were my inspirations. I’d do crosshatching over the watercolors with an ink pen, blending the techniques together. Cheatin’ also blends those techniques. It’s the first time I’ve ever been able to recreate my illustration style in a movie.”

Plympton has high hopes for Cheatin‘—including an Oscar nomination for Best Animated Feature. Though he’s earned nominations for his shorts Guard Dog and Your Face, he knows what an Animated Feature nod would mean. “People will say, ‘Wow this thing is raunchy and it got nominated for an Oscar. We should check it out.’ So that’s my plan. Maybe I’m a Pollyanna, but I think this film has a shot.”

“When I was a kid watching Disney films, I never dreamed I could make my own animated feature. Now I’ve done seven of them. It’s a whole new world. Anybody can do it now.” – Bill Plympton

To protect the movie’s Oscar eligibility, Plympton won’t be streaming Cheatin’ over the Internet, as some would like. “I don’t really need to do that to make my money back,” he explains. “The problem is that to get an Oscar nomination, Academy members need to see it in theaters.” He expects this rule will change eventually, but meanwhile, Cheatin’ will have its European premiere at Spain’s Sitges film festival (where Plympton has been a four-time winner in years past). He’s currently aiming for a U.S. premiere at Sundance, where he’s been nominated twice for the Grand Jury Prize.

Like a true dyed-in-the-wool indie artist, Plympton believes that the number of independent feature animators will continue to rise. “When I was a kid watching Disney films, I never dreamed I could make my own animated feature. Now I’ve done seven of them. It’s a whole new world. Anybody can do it now.”