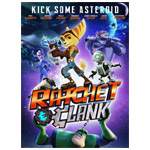 Adapting any popular franchise into a movie is a tricky task, given how attached fans become to their favorite franchises, says Kevin Munroe, director of the feature film version of the hit PlayStation video game series Ratchet & Clank.

Fans will have their chance to see if he succeeded when Ratchet & Clank is released April 29 in the United States and day and date around the world in many territories. The feature is the second theatrical release produced by Vancouver-based Rainmaker Entertainment and is a big step forward for the company.

Ratchet and Clank was an ideal candidate as a franchise that had been well developed and was working well in games but also had potential to reach beyond that audience and hit a family-friendly mark, says Rainmaker Chief Creative Officer and President Michael Hefferon.

“Escape from Planet Earth, our first big feature film, was just completed in the studio and we were very keen to find another film property but also keen to have an opportunity to be one of the IP stakeholders in the film,” Hefferon says. Rainmaker is the majority investor in the Ratchet & Clank movie, along with Blockade, the Sony PlayStation group and a Chinese partner.

As with any adaptation, there are a lot of parameters to deal with. “There’s a lot of people who all have legitimate concerns and wants, but then at the same time you have to find the story that you’re going to tell in the middle of it,” says Munroe.

The movie benefited from the involvement of the series creator, Insomniac Games, and the original designers at Creature Box — all of whom helped ensure continuity of look for the movie, Munroe says.

“A lot of times, it’s just about just let’s get over ourselves and embrace what’s already working,” he says. “If it’s not broken why do we have to reinvent it?”

Munroe was tapped for the job due to a long association with Blockade’s Brad Foxhoven. “He had presented to me this idea long before Ratchet about taking game assets and trying to repurpose them for TV shows or films,” he says. That led to the duo working on Heavenly Sword, an animated video feature that was a test drive for later projects, including Ratchet.

Foxhoven took the project to Rainmaker, which is Blockade’s producing partner.

Munroe was originally attached to the project as an executive producer while working on a pitch trailer for a Sly Cooper movie that impressed everyone enough at Rainmaker to ask Munroe to take a bigger role. He was soon asked to direct.

It was a natural step for Munroe, who left Canada in the 1990s seeking an animation career in Los Angeles and ended up at game studio Shiny Entertainment, best known for the Earthworm Jim games.

“If there was one videogame studio that felt like an animation studio, that had that same vibe, it was definitely Shiny,” he says. That put Munroe smack dab in the center of the games world, where he was a fan of Ratchet & Clank and his games work got him into CG animation and into other areas.

On the script, Munroe says the first draft was spot on in tone but needed some streamlining. “There was probably enough content in there for 2½ movies, easily,” he says. “So it’s really about distilling down, it’s about how do you make one good movie without trying to cram everything in there.”

Adapting the look of the game was similarly a matter of refinement as Munroe says the original designs by Creature Box stand up extremely well and needed little adjustment aside from updating models and rigs to deliver feature-quality performances. “Whenever people see it, they say that’s totally the way Ratchet would do it, but then whenever you take and compare it to the latest game, it’s a massive leap forward in acting and performance.”

Rainmaker animated the movie with an in-house team that peaked at around 20 animators. Original Force in China supplemented that team and animated a small percentage of the film.

Rather than go the celebrity-casting route, Ratchet & Clank veterans James Arnold Taylor and David Kaye reprised their respective title roles, which they’ve been playing in the games for more than 10 years. “There was no question: James is Ratchet and David is Clank,” says Munroe.

Hefferon says the film was completed in March 2015 and has been awaiting the right distribution deals. Focus Features’ Gramercy Pictures is releasing April 29 in the United States, while Universal will release it the same day in Canada. Complementing the movie is, of course, a new Ratchet and Clank game, released April 12.

The film will debut day and date in 60 percent of the global markets secured by Cinema Management Group, with 80 percent of markets opening the movie within two months of its debut, Hefferon says.

Hefferon says he expects the film will do well for Rainmaker, which he hopes will develop into “the Canadian Mac Guff.” “I have great respect for the work that Mac Guff and illumination do, and companies like Blue Sky,” he says. “They all got their start somewhere.”