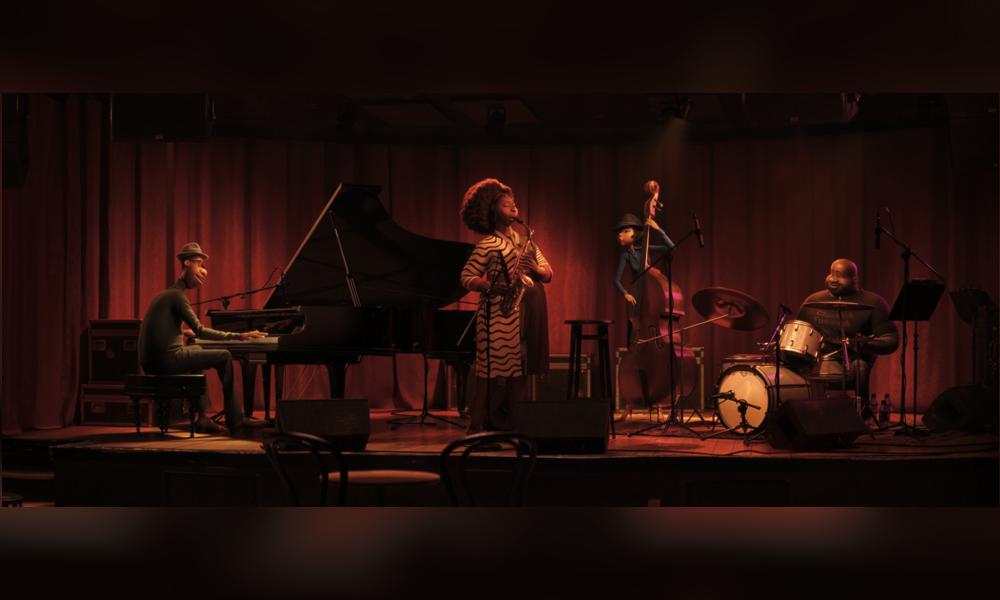 ***This article originally appears in the December ’20 issue of Animation Magazine (No. 305)***

There are lots of reasons to appreciate and admire Soul, Pixar’s 22nd feature and the studio’s first movie with a Black protagonist in its 34-year history. Directed by Pixar’s Chief Creative Officer Pete Docter (best known for directing Monsters, Inc., Up and Inside Out) and co-directed by playwright Kemp Powers, the movie centers on a middle school music teacher (voiced by Jamie Foxx) named Joe whose soul separates from his body after an unfortunate accident. He then has to find his way back to Earth to reunite with his body before his enemy can steal Joe’s dream of performing jazz on stage.

Docter began thinking about the original high-concept idea for the movie one day as he was pondering the importance of finding one’s true calling in life. “I basically have wanted to be an animator my whole life,” says the two-time Oscar-winning director during a recent interview. “While my friends were out playing soccer or going on dates, I was locked in my room making animated cartoons. I was so into animation that I found a school that was started by Walt Disney (CalArts) and when I graduated in 1990 I started at Pixar, where I helped create Toy Story and eventually I got to direct Monsters Inc., Up and Inside Out.”

The director says he feels that making animated movies was something that he was born to do, but some days he also wonders whether making cartoons is what he’s supposed to be doing with his time on Earth. “In fact, some days, I wonder: if I had a choice, would I decide to be born and come alive?” He asks. “So, really, it’s that thought or struggle that became the core of our film.”

The Trouble with Souls

Of course, Docter and his team had a major challenge with the concept of the movie: They had to figure out a fun and original way to depict souls in animation. “We did a lot of research around the world, including various religions and teachings and the fundamental idea that came up again and again was that souls were described as vaporous, non-physical and formless — similar to air,” he explains. “So, our big issue was how can we capture something non-physical … How do you draw air?”

The film’s producer Dana Murray, who also produced Pixar’s Oscar-nominated short Lou and exec produced last year’s Smash and Grab, says a lot of artists at the studio began to take a crack at coming up with interesting ways to put souls on the big screen. “We felt we needed more humanity, like clear facial features we could recognize with expressions and attitudes, so we came back to this drawing that Pete did early on, which seemed to suggest the ephemeral but also had a face,” she recalls. “We thought, if souls represent the full potential of who we are inside, maybe we could use color to help show that, and we also developed a whole new technique we’d never done before. We added line work to help to define the edges that might otherwise be too fuzzy, or that you couldn’t see very clearly. So then after months and months, we finally had found our soul characters.” 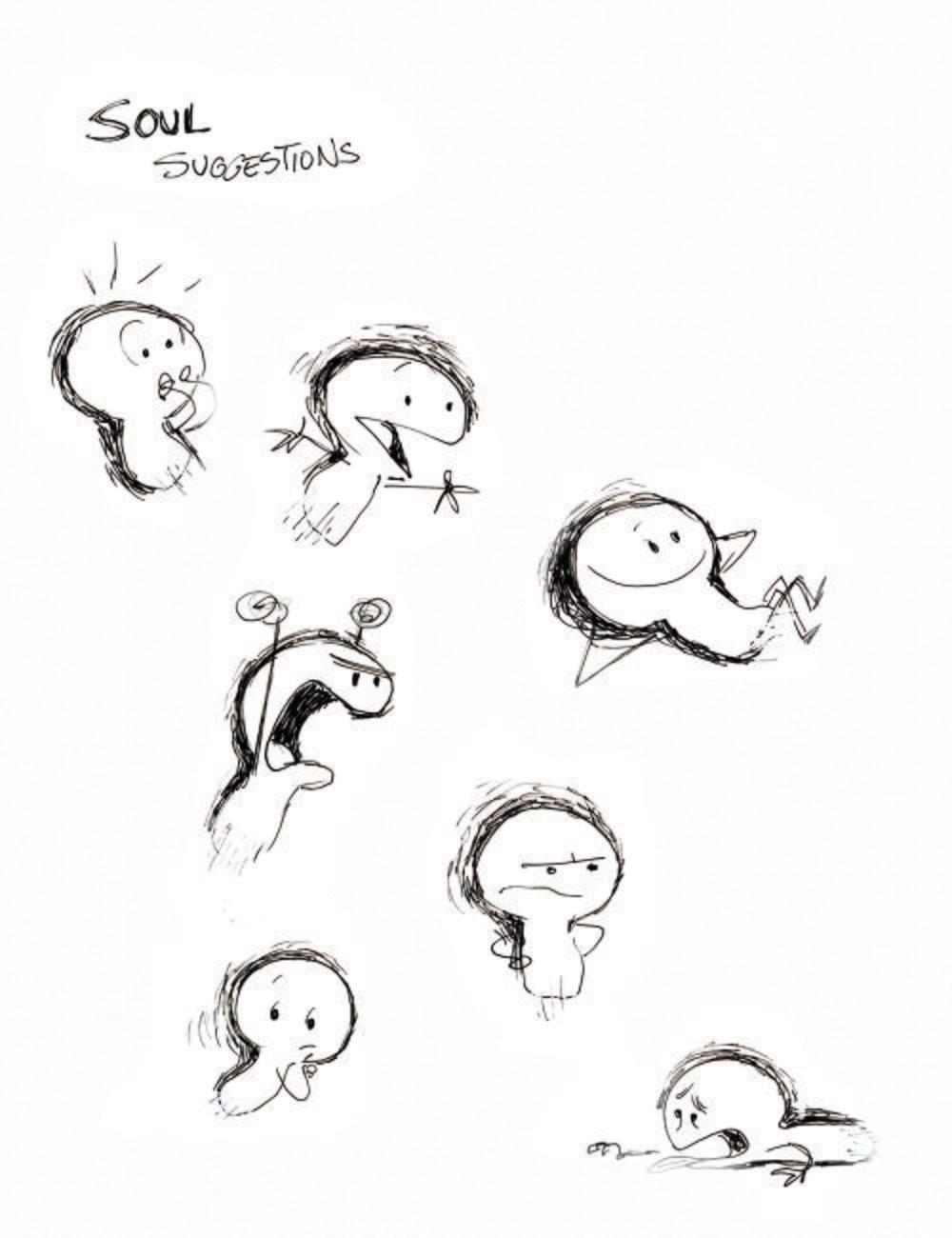 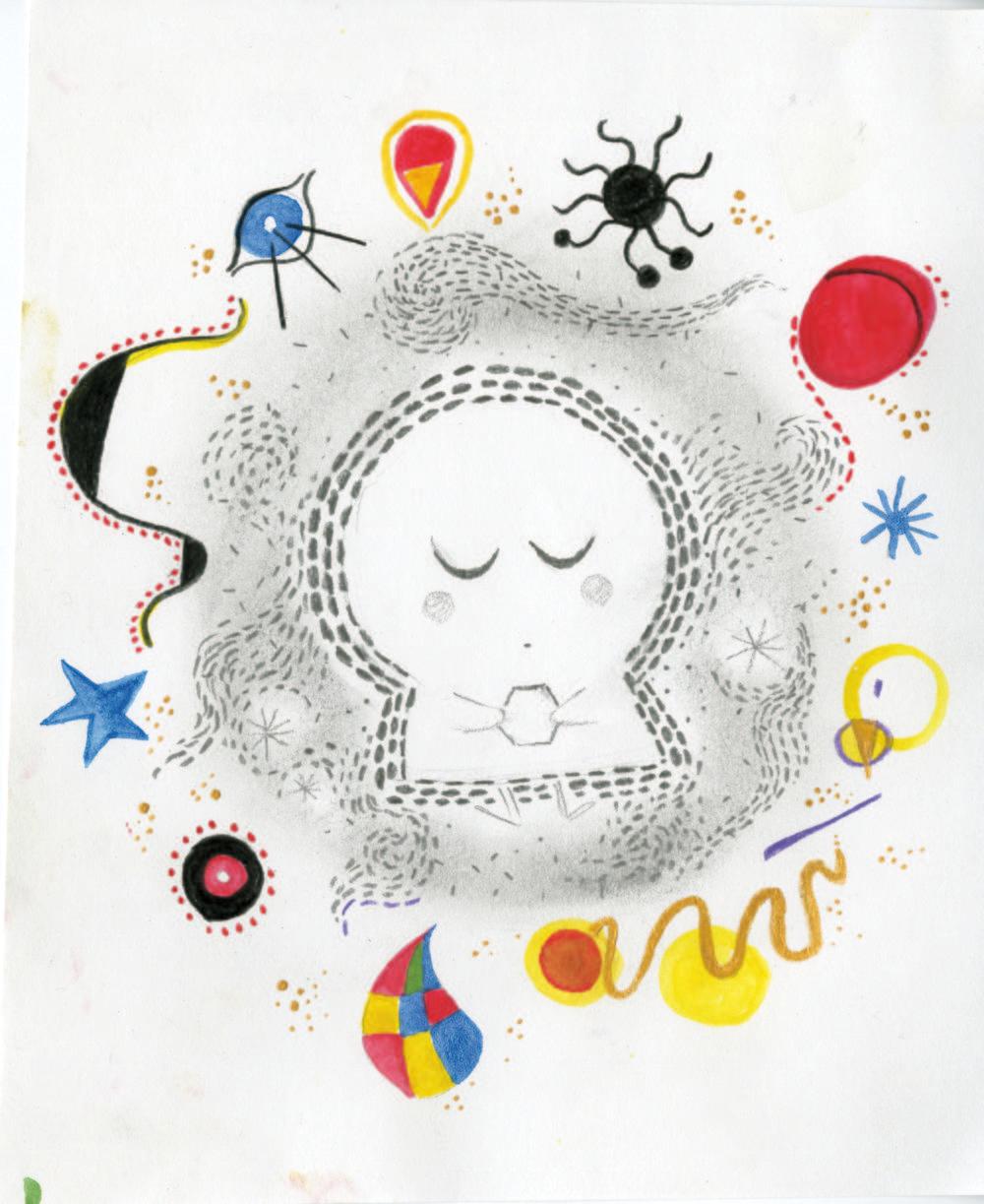 Next up was fleshing out the main character’s life on Earth, before he finds himself separated from his body. “We needed something that Joe could do that showed the promise of life, some passion that he had, something we’d all root for — like animation,” says Murray. “But that would be too inside joke. What if he was a scientist, or maybe a businessman, or… or…? We searched all around, and then almost by fate, somebody referred us to this video of an online Master Class by jazz legend Herbie Hancock. We realized that jazz was the perfect representation of what we were trying to say in the film. (i.e. Don’t judge, take what you’re given, and turn it into something of value.)”

Upon deciding that the main character of the movie would be a musician, the production tapped Jon Batiste, who is the pianist from The Colbert Show, to compose original jazz music for the score. They also brought in Trent Reznor and Atticus Ross (The Social Network) to deliver the music for the souls’ world of “The Great Before.” “Their music is so radically different, yet somehow perfectly matched for the film.”

Since the film dives into the jazz world and the African-American experience, the film needed to rely on the right Black voice, which Docter and Murray found in screenwriter and playwright Kemp Powers. “When I first came onto the project almost two years ago, Soul was still in rough form,” he says. “Joe was a character that needed a lot of fleshing out. Thankfully, Joe’s character and I had a lot in common. Just how much was he like me? Well, Joe is 45 and I’m also in my mid 40s. Joe lives in New York, which is my hometown — although Joe is from Queens and I’m from Brooklyn, and everyone knows that Brooklyn is better. Joe is a musician, and coincidentally, I used to be a music critic, I’m a musician myself, and my son is even named after the jazz great, Charles Mingus.” 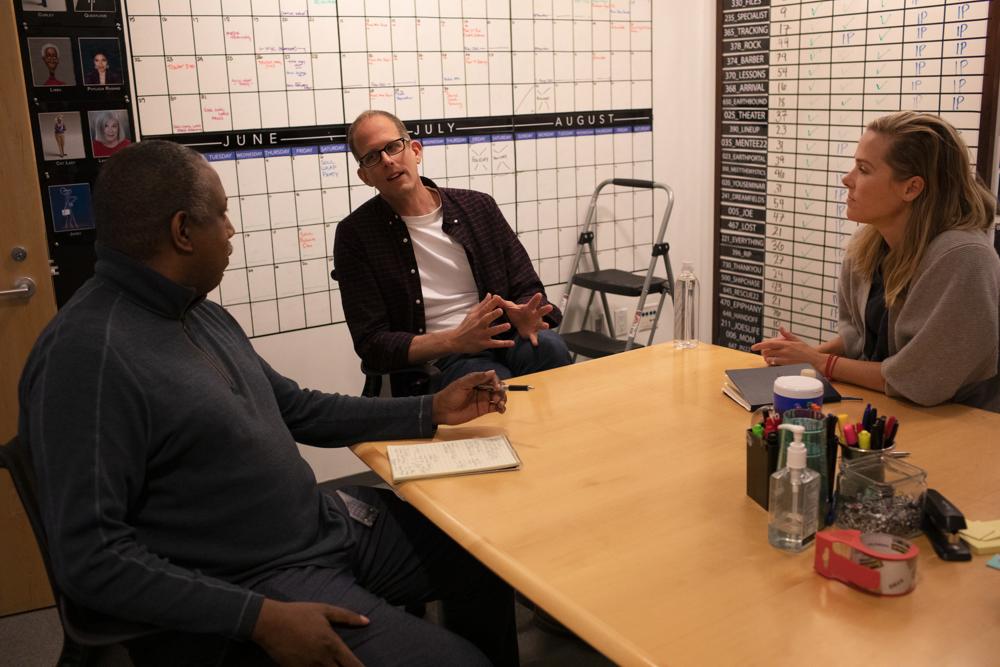 Kemp and the animation team spent a lot of time deciding the various elements that make Joe who he is. They took the crew to a typical barbershop in the neighborhood, visited a public school in Queens and met up with a real-life, passionate, middle school jazz band teacher. They also took trips to several jazz clubs in Manhattan. As Kemp points out, “Although my research and my personal experiences did help develop Joe and the story to a point, it was very important that the film transcended any one person’s life. As I said to Pete and Dana from the very beginning, ‘I don’t represent every single Black person’s experience.’ So, it was really important that we reached out further, so we partnered with a number of consultants on this film who we kept close throughout the entire creative process.”

For visual inspiration, Docter and his team looked at some of the sketches of influential British artist and cartoonist Ronald Searle. “He had such a distinctive graphic style, and we wanted to do something in our human world that was different from what we had done in Toy Story or Finding Nemo,” explains the filmmaker. “Of course, our artists put their own stamp on the designs of the movie’s worlds. We also looked at some Swedish minimalist sculptures to get that modern influence for both the characters and the soul world. In terms of other cinematic influences, we looked at films like Defending Your Life, Heaven Can Wait and an obscure 1940 movie called The Bluebird of Happiness (directed by Walter Lang and starring Shirley Temple), which is one of the only features we could find about a before-life experience.”

The filmmakers hope the movie will help bring audiences together during such a weird and trouble-filled year. “We hope our film will help audiences open their hearts to characters with different backgrounds and experiences,” says Docter. “I can’t gauge the impact a movie has on a young audience, but I hope it will create more awareness and understanding.”

Kemp adds, “Even before I came on board this project, it wasn’t uncommon for me to watch a Pixar movie to put me in a good place emotionally. I hope our movie will help put people in a good place. I recall during one of our screenings, a mother said that our movie made her think about disagreements she had had with her son about what he was going to study in college. Maybe it will inspire people to look at their friends and family and have a pleasant conversation about what they’ve seen. That’s what Pixar’s films have done for me in the past.”

“This past year, we’ve all had to look at how we spend our time and what we find most important in our lives,” adds Murray. “Our movie says that all souls come from the same playground and that we’re all created equal. That’s a good message to put out there for kids and their families.”

Disney-Pixar’s Soul will premiere on Disney+ on December 25, and in theaters internationally where the platform is not yet available.

You may also like...
Related Topics:featured, Pixar, Soul
Geographic Region:Worldwide