Pixar Animation Studios have revealed a first look at its upcoming CG-animated theatrical short, Piper, which will run in theaters ahead of the long awaited sequel Finding Dory (out June 17). The six minute, non-dialog piece is about a hungry sandpiper chick confronting his trepidations about going into the water with the help of his mother and a tiny hermit crab.

“It’s the kid at the playground feeling,” said director Alan Barillaro. “You fall down and you feel so small, but you look and see someone even smaller than you brush themselves off and tackle something, and learn from that in your own way. It was important to me to stay in the kid world and see the world from Piper’s eyes, and not be from the human perspective.”

Barillaro (animator on A Bug’s Life, Finding Nemo and WALL-E), said at the studio’s Finding Dory press junket that the short began as an experiment in pushing Pixar’s photoreal animation capability, previously explored in The Blue Umbrella. Barillaro was mentored on his directorial debut by Andrew Stanton.

The filmmaker was inspired by watching shorebirds as they scurried back and forth on the sand, avoiding waves and plucking up bits of food. He wanted to imbue his characters with movement that was “poetic but caricatured, with an emotional quality.” Working with a little bird as the key character meant finding interesting ways to portray emotion, like having his “hair style” of head feathers ruffle up when he’s scared.

Feathers were one of the big tech challenges of the short. “How to animate between 4 and 7 million feathers? We had to come up with region controls. And what we realized was it influenced our acting,” said Barillaro. The team also experimented with hand-animating some of these millions of feathers.

R&D was also devoted to creating believable bubbles. “This is the first — as far as I know — an animator shaping the bubbles as 12 separate sculpts that he filmed and referencing that … It’s back to Pixar’s tradition of tech innovation for shorts.” 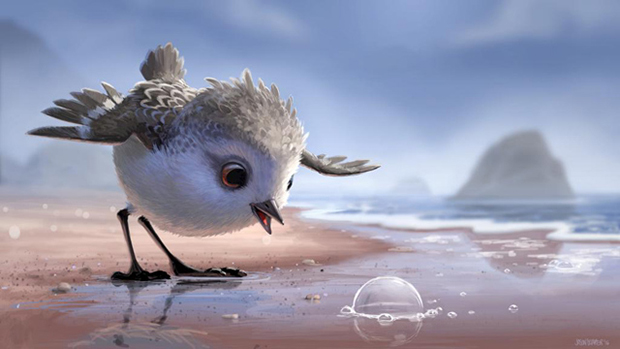