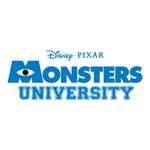 This weekend is shaping up to be an interesting battleground between new arrivals Disney/Pixar’s much-awaited prequel Monsters University and Paramount’s intriguing Brad Pitt zombie movie World War Z. Pixar’s follow-up to the 2001 Monsters, Inc. has been receiving strong reviews and is expected to score about $70 million at the box office. Both Monsters U and World War Z begin their “weekend rollout,” on Thursday at 8 p.m.

Directed by Don Scanlon, Monsters University features a top-notch voice cast which includes Billy Crystal, John Goodman, Steve Buscemi, Frank Oz and Helen Mirren. This 14th movie in the Pixar filmography has so far received a 77% [updated] on the Rotten Tomatoes critical overview website, which is lower than the studio’s 2012 effort Brave (78%) and Pixar’s 2010 favorite Toy Story 3 (99%), but higher than 2011’s Cars 2 (38%). Blue Umbrella, another well-reviewed short from Pixar, directed by Sachka Unseld, plays with the feature.

World War Z, which is directed by Marc Forster (Quantum of Solace, Monster’s Ball, The Kite Runner), was the subject of some speculation after Damon Lindelof (Lost) was brought in to rewrite a new ending in the 11th hour in the film’s production. The pic features an excellent performance by Brad Pitt as a U.N. fighter and family man who races against time to contain some contagious zombies around the world. Audiences will also enjoy some fantastic 3-D visuals courtesy of production designer, art director Jon Billington and vfx supervisor Scott Farrar. ILM, Cinesite, Halon Entertainment, Moving Picture Company (MPC) and Legacy Effects are some of the key vfx houses contributing to the movie.

Both Monsters University and World War Z will also face Warner Bros. blockbuster Man of Steel, which has made over $235 million during its first week in release. However the Pixar’s film major competition arrives on July 3 in the form of Universal/Illumination’s Despicable Me 2, which has already generated a lot of good buzz and was one of the audience favorites at the recent Annecy festival. 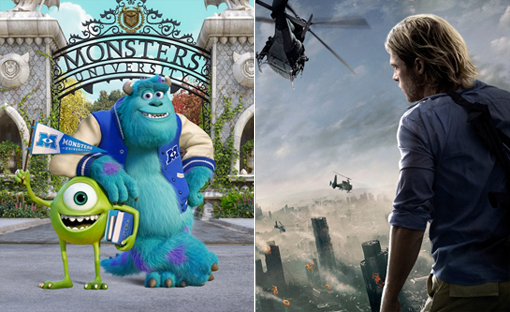 Here are the trailers for Monsters University and World War Z: