Pixar has revealed two of the aquatic amigos set to help everyone’s favorite amnesiac blue tang on her quest in the upcoming Finding Dory, out in theaters June 17, 2016. EW.com got first dibs on the image, which shows Dory (voiced by Ellen DeGeneres) and her new pals Bailey the snub-nosed beluga whale and Destiny the whale shark.

Bailey is voiced by Modern Family star Ty Burrell, and Destiny is played by Kaitlin Olson of It’s Always Sunny in Philadelphia fame. “We totally get on each other’s nerves,” Olson told EW. “I like to think I’m a shark, but Bailey calls me a whale, and I make fun of his head, because it’s gigantic.”

Finding Dory follows the tang on a quest to find her long-lost parents. She meets Bailey and Destiny when she passes through a marine life facility, who help her on her journey. The film also stars Albert Brooks, Diane Keaton, Dominic West, Ed O’Neill, Eugene Levy and Idris Elba. 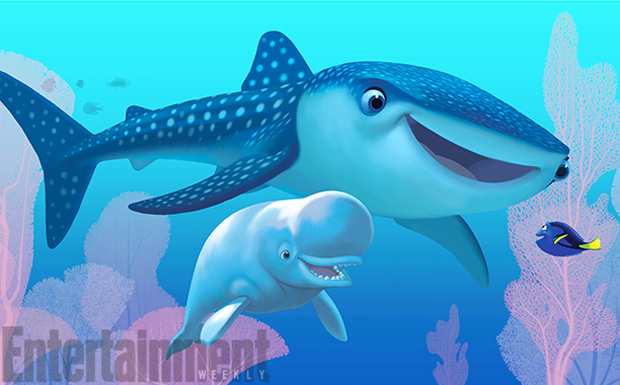