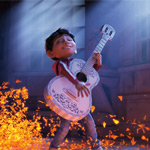 Disney-Pixar is offering us a much-needed pick me up, thanks to its musical Day of the Dead feature Coco (Nov. 22). Check out a trio of new videos related to the upcoming adventure below!

First, check out a new clip from the film which takes us in the heart of the action in “Mariachi Plaza” which imparts an important lesson: don’t ever cross anyone’s abuelita!

Pixar Animation Studios also announced at last week’s Oculus Connect that it would be embarking on its first-ever VR project tied to the new film. Directed by Ross Haldane Stevenson and produced by Oscar winner Marc Sondheimer (Piper), Coco VR allows users to explore the dual worlds of the film with their friends in a next-level social VR experience, available on Oculus Rift on Nov. 15 and Samsung Gear VR on Nov. 22.

Coco VR is a co-production of Disney-Pixar and Oculus, with VR creative development and execution by Magnopus. Supervising TD John Halstead spearheaded technical efforts for Pixar. The experience will be available to try out ahead of launch at Día de los Muertos festivals in Los Angeles, New York City, Houston, Phoenix, Dallas, San Antonio, Oakland and Chicago (Oct. 28 and on); Camp Flog Gnaw Music Festival in LA (Oct. 28-29); and select Disney Stores and movie theaters across the US (through Nov. 22).

Read more about the making of Coco in the December issue of Animation Magazine (No. 275) available soon!