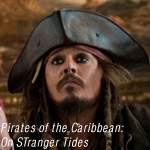 The tide was high for the fourth Pirates of the Caribbean movie this weekend, though perhaps not as high as the Walt Disney Co. would have liked — at least domestically.

Pirates of the Caribbean: On Stranger Tides pulled in an estimated $90 million at the domestic box office in its opening weekend. That gives it the biggest opening of the year to date, though it does fall short of some prognostications that the studio was shooting for the $100 million mark. The news overseas more than made up for the shortfall, with the movie grossing a record estimated $256 million.

That pattern is similar to the results posted by Rio, Fox and Blue Sky Studios’ animated feature film, which grossed an estimated $4.6 million this weekend for a domestic take of $131 million and an international haul that’s now up to $313 million for a worldwide total to date of $445 million.

Rio’s results were good enough to land it in fifth place this past weekend, behind Bridesmaids with $21 million, Thor with $15.5 million and Fast Five with $10.6 million.

Also still in release are Paramount/Nick’s Rango, which pulled in about $370,000 this weekend, and Illumination Entertainment’s Hop, which did just over $250,000 in business. Rango has so far earned $121 million domestic and $119 million foreign for a $240 million worldwide total. Hop has sold $107 million worth of tickets domestically and $63 million abroad for a total of about $171 million.

Animation fans won’t have long to wait for the next big release, as DreamWorks Animation’s Kung Fu Panda 2 is set to arrive in theaters May 26 for the Memorial Day weekend holiday, followed June 24 by Disney-Pixar’s Cars 2.