The animated spin-off competition heated up this week as new trailers for DreamWorks’ Penguins of Madagascar (out Nov. 26) and Universal-Illuminations’ Minions (July 10,2015) arrived within a day of each other. Check ’em out! 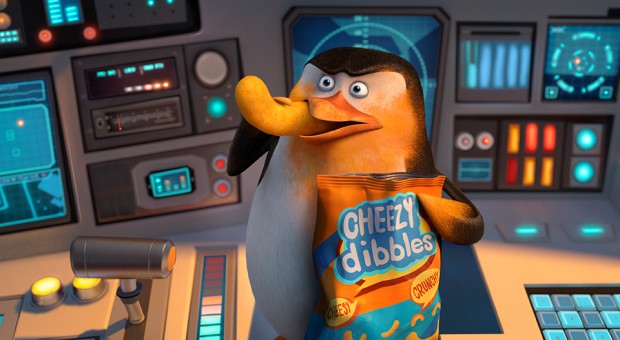 Synopsis: Super spy teams aren’t born… they’re hatched. Discover the secrets of the greatest and most hilarious covert birds in the global espionage biz: Skipper, Kowalski, Rico and Private. These elitists of the elite are joining forces with a chic undercover organization, The North Wind. Led by handsome and husky Agent Classified (we could tell you his name, but then…you know), voiced by Benedict Cumberbatch. Together, they must stop the villainous Dr. Octavius Brine, voiced by John Malkovich, from destroying the world as we know it.

Directed by Simon Smith and Eric Darnell from a screenplay by John Aboud and Michael Colton, the film features the voices of Tom McGrath, Chris Miller, John DiMaggio, Christopher Knights, Annet Mahendru, Peter Stormare and Ken Jeong as well as Malkovich and Cumberbatch. 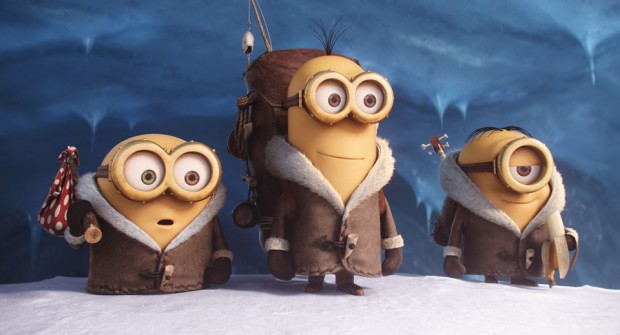 Synopsis: The story of Universal Pictures and Illumination Entertainment’s Minions begins at the dawn of time. Starting as single-celled yellow organisms, Minions evolve through the ages, perpetually serving the most despicable of masters. After accidentally killing off so many of them—from T. rex to Napoleon—the Minions find themselves without a master to serve and fall into a deep depression.

But one Minion named Kevin has a plan, and he—alongside teenage rebel Stuart and lovable little Bob—ventures out into the world to find a new evil boss for his brethren to follow. The trio embarks upon an adventure that ultimately leads them to their next potential master, Scarlet Overkill (Academy Award winner Sandra Bullock), the world’s first-ever female super-villain. They travel from frigid Antarctica to 1960s New York City, ending in mod London, where they must face their biggest challenge to date: saving all of Minionkind… from annihilation.

Featuring a soundtrack of hit music from the ’60s that still permeates our culture today, Minions is produced by Illumination’s Chris Meledandri and Janet Healy, and is directed by Pierre Coffin and Kyle Balda. Brian Lynch has written the screenplay for the 3D-CG comedy adventure, and Chris Renaud serves as executive producer of the film.