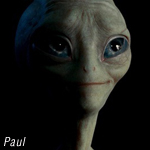 After sending some moms to Mars last weekend, this weekend the aliens are coming to us.

Paul, a live-action comedy about a pair of comic book fans who meet a CG-animated alien outside of Area 51 on their way to San Diego, opens this week at about 2,800 theaters.

The film was written by and stars Simon Pegg and Nick Frost, and is directed by Greg Mottola. Paul also features Seth Rogen as the voice of Paul, Jason Bateman and Kristen Wiig. The film opened in the United Kingdom in February and has to date earned about $24 million in international ticket sales and mostly positive reviews.

Visual effects on Paul are by Double Negative and Spectral Motion and the film is being distributed by Universal.

Also new this week is the thriller Limitless, distributed by Relativity and showing at some 2,700 cinemas; and Lionsgate’s crime drama The Lincoln Lawyer at about 2,400 locations.