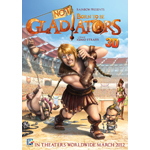 Rainbow Studio has announced major deals with Paramount and Medusa for its latest 3D animated feature film, Not Born to be Gladiators.

Presented to the international market at this year’s Cannes Film Festival, Paramount Pictures will handle all North American distribution while Medusa will handle Italy.

“It’s a big opportunity for an independent producer to get a quality 3D CGI-animated comedy to a studio level, we hope to represent a new step forward for European animation in terms of quality and international success,” said Rainbow founder Iginio Straffi.

Not Born to be Gladiators, directed by Straffi, has a $55 million budget and a script by the Oscar-winning writer of A Shark’s Tale and Ice Age 2, Michael J. Wilson.

Rainbow and Paramount are discussing casting for the voices of the main characters.

Here’s how Rainbow describes the film:

Left as an orphan by the terrible eruption of Pompeii, young Timo is saved by General Chirone, founder of the most famous Gladiators’ Academy of Rome. As a young boy he grows up surrounded by all kinds of gladiators but shows no interest in becoming one of them. Rather, he is a somewhat apathetic but happy go lucky and fun loving young man, slightly overweight and bit out of shape.

Everything changes when Lucilla, Chirone’s beautiful daughter returns home from Greece. Timo grows fond of Lucilla however, she is promised to Cassio, considered by many as Rome’s best gladiator and a celebrated nephew of the Emperor.

Timo badly wants to show Chirone that he’s worthy of Lucilla’s hand and that he is a better gladiator than Cassio. Temptation causes him to take a short and cheat by using a strengthening potion, however his glory is short-lived, he is quickly exposed and banished from the Academy.

Fate brings Timo across Diana, a mysterious, exotic and sexy trainer. Through a series of bizarre training sequences, Timo evolves into a Gladiator fit to fight at the famous opening match of the grand Coliseum.

Timo faces Cassio in front of a sell-out audience with the goal of proving that he was in fact ‘born to be a gladiator’ that both Rome and Lucilla deserve. We will see!