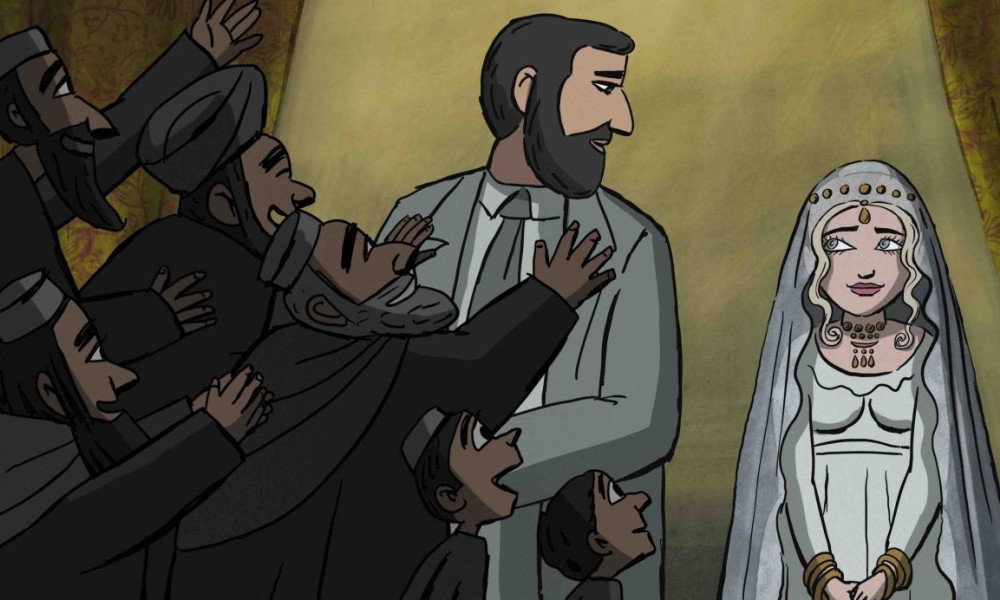 Animation aficionados will recognize Czech director Michaela Pavlátová as the acclaimed director of shorts such as Words, Words, Words (1991), Repete (1995), Forever and Ever (1998), Carnival of Animals (2006) and the Oscar-nominated, Annecy Prize-winning Tram (2012). This year, her first animated feature My Sunny Maad premiered at Annecy in June. The film, which is an adaptation of journalist and humanitarian worker Petra Prochazkova’s novel, Frišta, centers on a young Czech woman who experiences life in post-Taliban Afghanistan after she marries an Afghan man. Pavlátová, who is also the head of the animation department at the prestigious Prague Academy of Performing Arts’ Film and TV School (FAMU), was kind enough to speak to us about her acclaimed new movie.

Animag: What made you decide to tackle such a challenging subject with animation?

Michaela Pavlátová: Although I have made many short animated films and two live-action features, in my heart, I am a director of animation. I’ve found it isn’t easy for me to write features and also knew I wanted to spend the next couple of years of my life working with emotionally strong female creators. Therefore, it was important to find a book or script that wasn’t primarily for animation. I love animation — it is my life, my passion — but I feel we are in a bubble or circle and I wanted to prove that as a medium it can talk to a wider audience. It is just a question of time for audiences to forget they are watching a ‘cartoon’ and that they are simply watching a film.

I also felt that, very often, we can find beautifully animated films but the stories are not as well developed as in live action; that the stories are not so rich. I am not talking about Pixar and other bigger studios — they usually have well-working scripts — but in art films, the story seems to come second. I wanted to concentrate everything on the story. 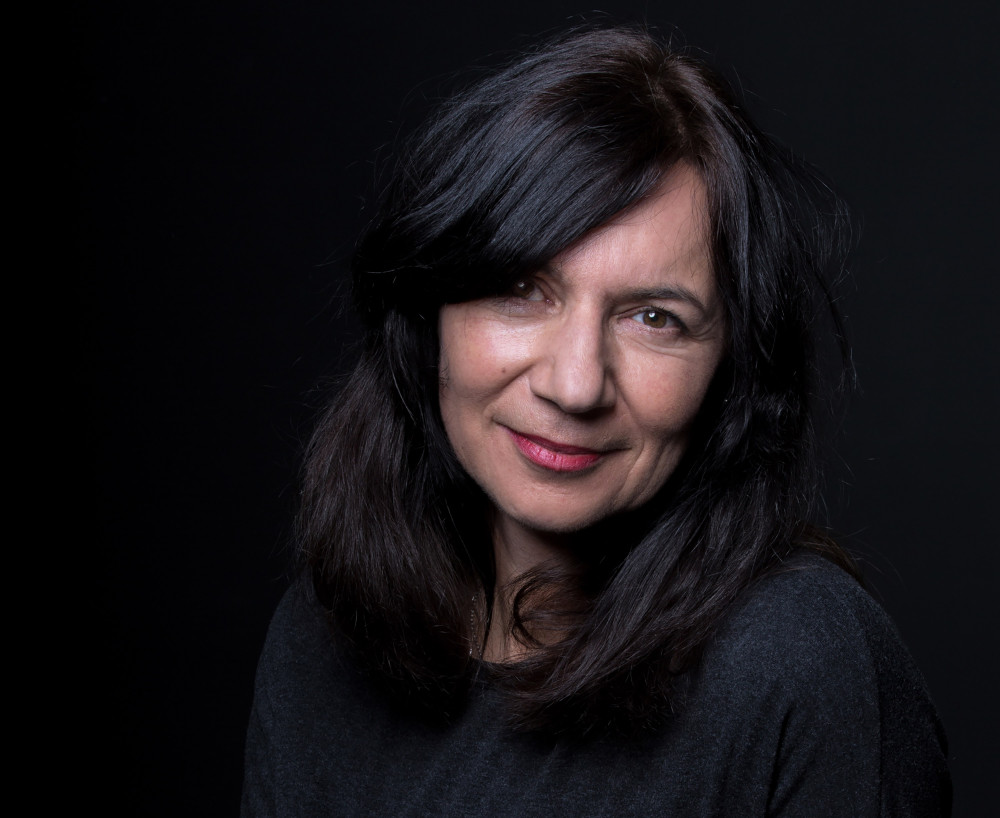 What attracted you to Petra Prochazkova’s novel?

I bought the book by accident … and the title seemed familiar. Reading what was based on Petra’s observations, I immediately fell in love with the main character, Herra. She is a woman I felt very close to as we shared similar experiences. I soon realized why the book was so familiar: My producers at Negativ Film Productions already had the rights for the adaptation; originally in early development as a live-action by two male directors, but they never found the financing. I called Negativ and told them, “I must be the director, it’s about women … let me do it.”

I asked myself often, why I was making the film as a foreigner? It is one thing to be objective and not properly understand a country, but through Herra, I was also the outsider. She became a friend and a living person for me. But, I felt that if I became Herra and appeared in a place where you are not normally accepted it gave me the right perspective and approach. This wasn’t just the story of her love for the country — how her husband, Nazir, changes along with the relationship — but also a window into how the habits of the family change. The intimacies of life, where you see how many things are different and yet how many things are the same. Another important factor for me was the humor. Petra’s book is more of an observation — the dramatic element hidden underneath — but the humor is how she deals with the painful and horrible situations. 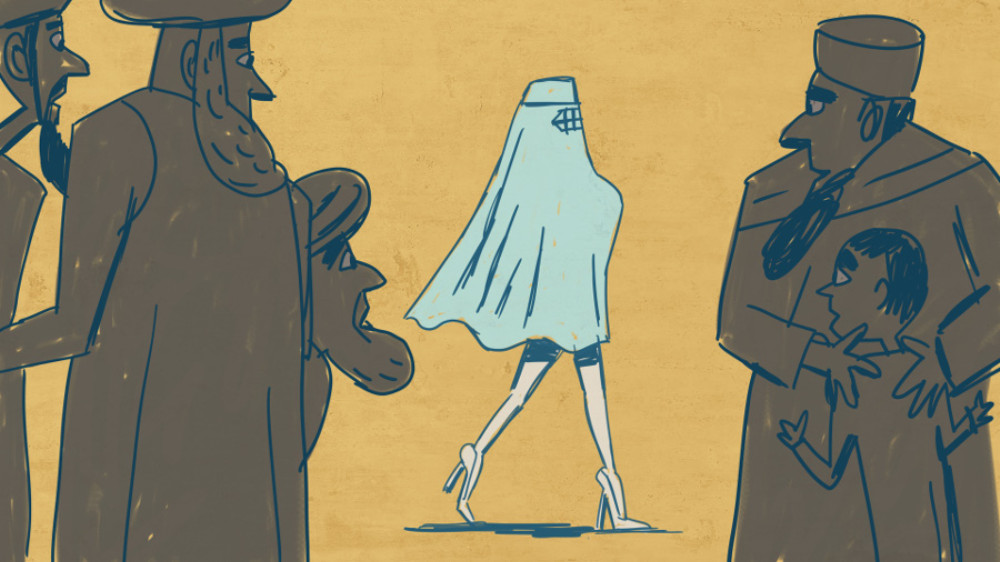 Do you feel like your experience in live action has informed your animation?

A little. Primarily, I trust the acting of animation to convey the drama — the minimalistic gestures.

This is what was so moving. Your direction is so subtle; the sound of them breathing; Maad’s breath of anxiety one moment, the next a contented sigh. It’s rare you experience this in live action, let alone animation.

Yes, exactly. In my short films, I am always focused on relations and existing things. I love to animate emotion and the inner workings of my characters. You don’t have to animate the big movements.

So, was your design of the film determined by an economic approach or did it also come from your personal style?

I try and see individually for each project. I don’t have the same obvious style like Bill Plympton’s, for example. I always want to make each film different for my own amusement. They are different stories, so I look for the best tools to tell each one. I couldn’t be as sketchy and experimental as in my shorts but when they are slower, there is more time for emotion.

Which animation tools and techniques were used for this movie?

First and foremost, this is a film that uses the tool of animation. I’m very much a 2D person even though I admire other forms, therefore, I knew I wanted to make the film simplistically and I tried to continue with my sketchy style to define the characters. Every second counts, so it is much easier to work digitally drawing on my Wacom. Maad was produced in Toon Boom’s software, Harmony, and the backgrounds in Adobe Photoshop with post-production completed in After Effects.

Which companies were responsible for the animation?

We chose Alkay Animation in Prague because they used many respected and experienced animators from an older state studio, Krátký Film. After securing finance with France and co-producers, Sacrebleu Productions, Gao Shan Pictures worked on the rest of the animation. I designed the film not realizing how much work was involved. I felt it was a mistake as I had my hands on everything; sending them drawings; corrections on roughs and key drawings. This isn’t something I would do on future films and was mainly down to experience and all of us all learning together.

How long did the film take to produce from start to finish?

Together with the work on the adaptation of the book, it took about seven years.

Based on the recent developments in Afghanistan, what are your thoughts on the timely subject matter of your film?

Historically, Afghanistan has been heavily tried. People in Afghanistan have been living under rigid political regimes and only occasionally and for a short time could breathe freely. That was the moment we started working on our film. Our story is intentionally intimate and at the same time a universal picture of one family and the complicated relationships within it, but also a view of the characters, who are loving, compassionate and tend to emancipate themselves. I wanted to show that Afghans, at their deepest core, experience the same emotions and intimate dramas as people anywhere in the world. Unlike us, however, they cannot be themselves freely and freely fulfill their destiny.

The situation in Afghanistan has now become more complicated and dramatic, where again and again there seems to be no hope for the future. I myself am experiencing it with greater intensity and deep sadness as we have friends, actors and co-workers in Kabul. They are often in my thoughts.

How does My Sunny Maad fit with the rest of your work?

I think that this is for other people to judge. It makes more sense that one piece has many colors. I tried to push more humor because it existed in the book, but it was more difficult to translate on screen; many other sequences were prepared but they interrupted the flow of the story. When you have such a dramatic film, the humor is limited.

Were there any particular influences? The docu-style and drama of Waltz with Bashir and The Breadwinner come to mind.

Certainly these two, but also Persepolis [2009], which was more stylized but, again, it had a sense of humor. These examples opened the world to a new state of animation because they were in the Cannes competition, reminding audiences that animation is not just for children. All my life I have been fighting with this and it is our goal at FAMU to open it up to wider audiences. These examples gave me the self-confidence to say, “I can do that.” At the festivals you get a feel for what is going on politically and in the arts; it informs you and then you start your new thing.

People often have the attitude of, “Animation isn’t for me.” But I have witnessed journalists in screenings turned on after five minutes, completely absorbed. I believe that each animated film has the power to convince people that it can be just as good as live action; that it is only a tool and technique. My Sunny Maad is hopefully one other step to bring an audience closer to realizing they don’t have to divide film, whether animated or not.