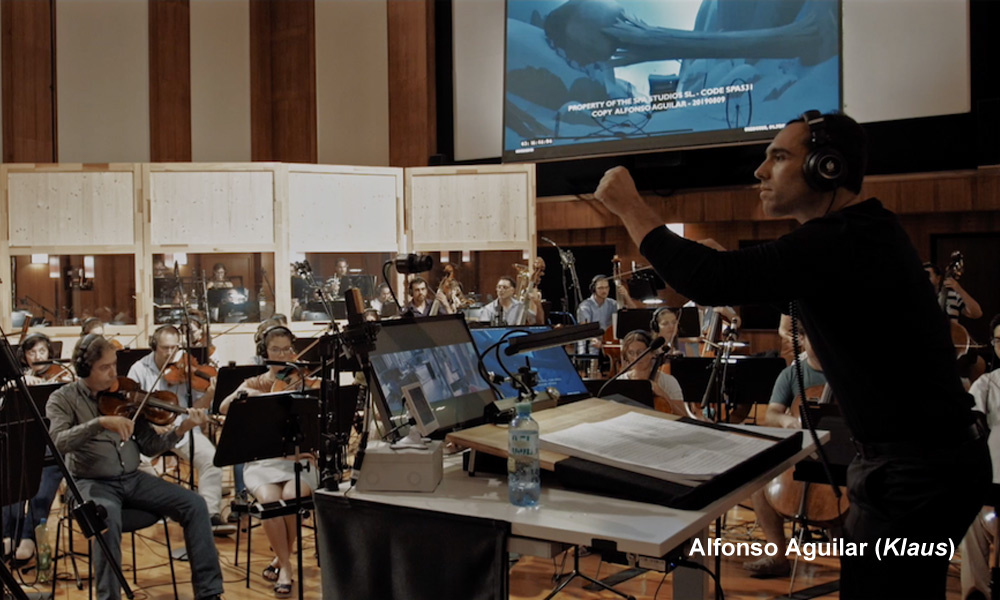 ***This article originally appeared in the February ‘20 issue of Animation Magazine (No. 297)***

Feature animation and music have been Oscar-night dates for some eight decades now, and the musical scores for many of this year’s top nomination hopefuls are finding their voices — literally. One of this year’s strong contenders, Disney’s Frozen II, features seven new songs by Kristen Anderson-Lopez and Robert Lopez (2014 winners for Best Song), and returning composer Christophe Beck once more called upon the Norwegian female chorus Cantus to flavor and develop his score. “Similar to how Elsa and Anna have grown up since the last film, the new score has also matured and introduces more sophisticated musical concepts and thematic elements,” Beck stated.

Other composers are making vocals integral parts of their scores as well. For the indie contender Buñuel in the Labyrinth of the Turtles, distributed by GKIDS, a chorus of voices was employed for a key scene set in a school, in which the impoverished children sing to the main character, shattering his emotional dam. Given the Spanish production’s limited budget, composer Arturo Cardelús came up with an ingenious scheme to record the music: he asked a friend at London’s Royal Academy of Music to make the choral passage part of the current curriculum. After weeks of rehearsals, the students were taken to Abbey Road Studios to record the piece … for class credit. “They were 19, 20 [years old] and they were all so excited,” Cardelús says. “It was a win-win.”

Budget considerations were far less of a problem for 2011 nominee John Powell, whose score for DreamWorks’ How to Train Your Dragon: The Hidden World also drew upon choral passages. “Between Dragons 2 and 3 I wrote an album of choral music, including a requiem,” Powell says. “I spent a lot of time working on my choral writing, and I think it improved number three.” Powell convinced British musician Eric Whitacre, who pioneered the concept of virtual choirs, to provide the voices and conduct the session. “He has his own ensemble of musicians he calls on when he’s doing recordings and concerts in Europe,” Powell notes. “I saw what a real choral conductor can bring out in a choir: they reacted to every little nuance of his face and fingers.”

Powell also collaborated with Icelandic singer/songwriter Jónsi for the music underscoring the hidden world sequence. “We always said his voice is the voice that you recognize as the dragon’s voice, so I wanted to do something in that world that would be a metaphor for the dragon’s home,” Powell says. 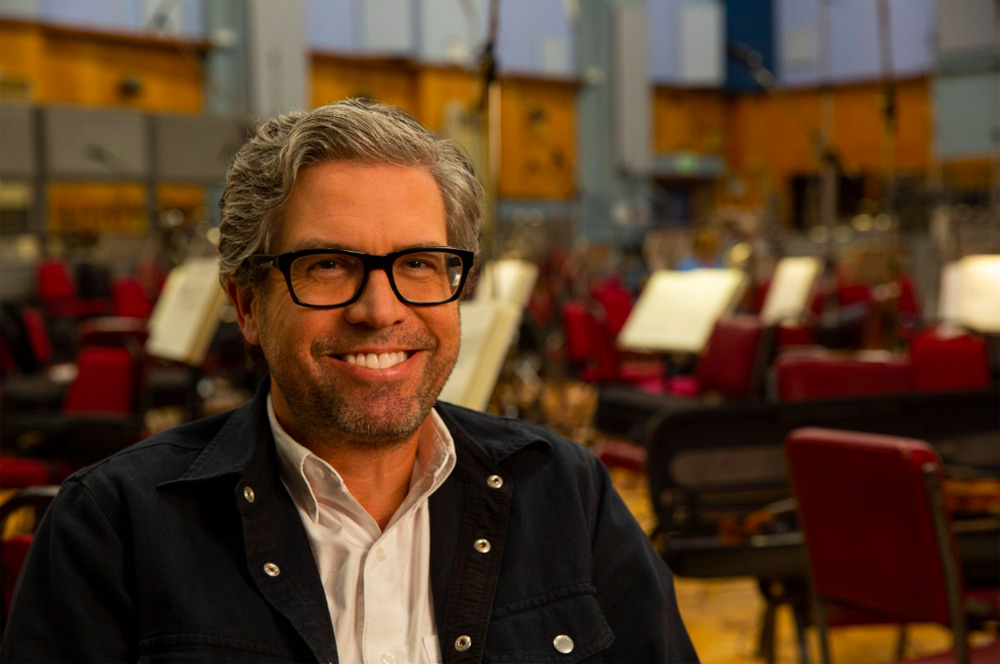 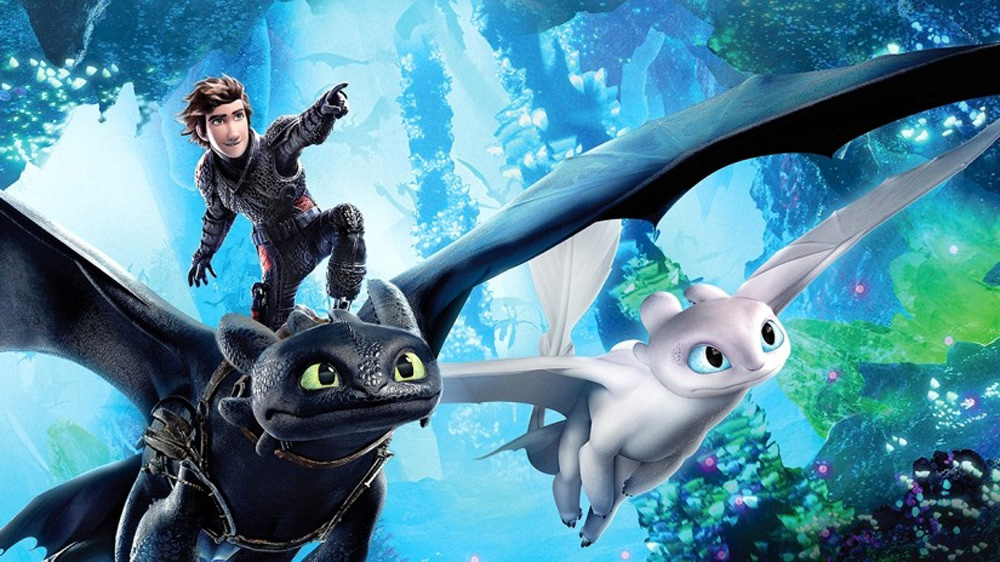 To Shangri-La and Beyond

In crafting the score for LAIKA’s Missing Link, two-time Oscar nominee Carter Burwell turned to a choir to heighten the aural awe in the climactic sequence set in Shangri-La. “The whole movie is about getting to this place,” Burwell says, “so when we finally get there I thought it was important to have some new, breathtaking elements in the score as a way of amping up the orchestration.” The Shangri La sequence features more brass instrumentation, including a bass trombone, which Burwell says “delivers a lot of the very low, profound bass notes.”

Overall the score relies heavily on strings to emphasize the story’s Britishness (it involves a Victorian-era explorer who finds and befriends a homesick Yeti). “[Writer/director Chris Butler] really wanted the film to look and feel like an old, classic British production,” the composer states. “He wanted a traditional sound in the score, but it also harkens back to travelogue adventure films, so as you go through each geographical area you lend some of the instrumental flavor from that area. When we’re in the Pacific Northwest we hear guitar or Native American winds, when you’re in India you hear the sitar, and when you get to the Himalayas there are some wind pipes. This is probably the first time I’ve had such variety in one film.” 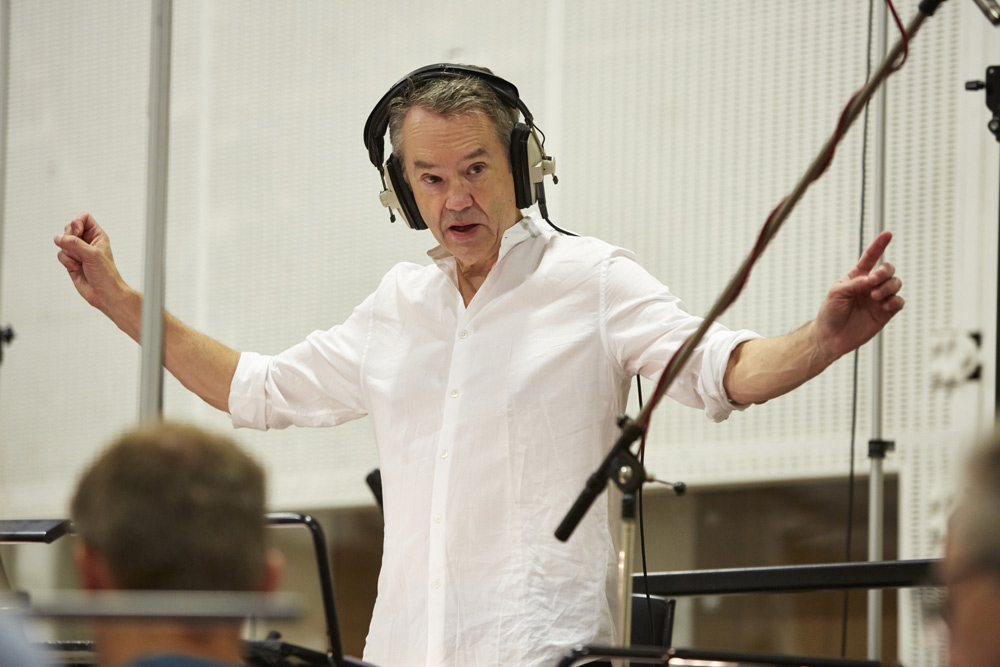 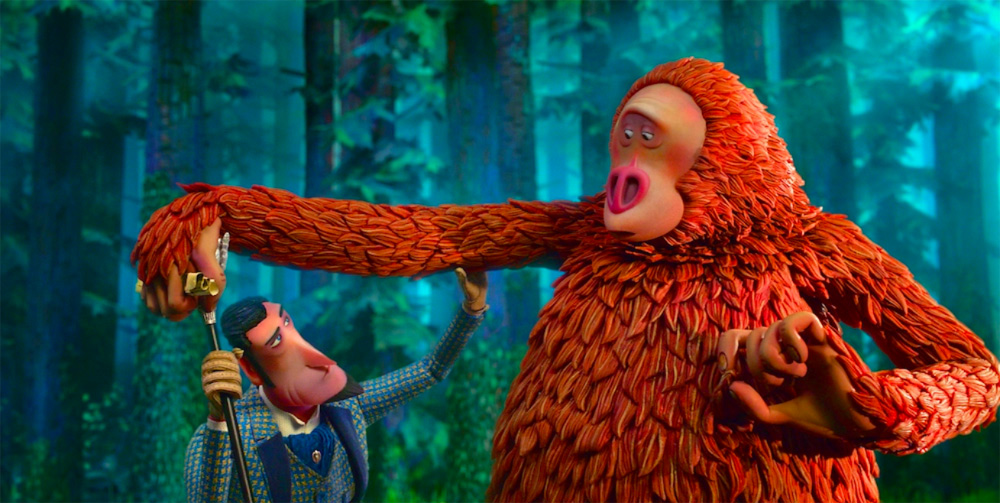 For Rupert Gregson-Williams, composer of DreamWorks/Pearl Studios’ Abominable, employing human voices into the score was a way to add majesty to the sound. “Because of the epic size, especially when we get into the Himalayas, I really couldn’t resist the choir,” he says. “It’s a good emotional tool, but it wasn’t a representation of any particular character.”

There was one exception to that: Gregson-Williams’ own voice is the representation of the Everest, the soulful Yeti befriended in the film by a young girl named Yi. The composer provided the creature’s signature humming for the production scratch track, only to see it retained in the final product. “I actually tried hard to get the producers to use someone else but they kept coming back and saying, ‘But we like it!’” Gregson-Williams says. “I’d say, ‘There’s someone else out there who could do a better job than me,’ but it stuck in the film.” While he is actually pleased to have his voice is so completely integrated into the film, the composer/hummer confesses that he had a little help. “I’ve been asked if I had that sort of range, and my answer is, obviously I don’t,” he says. “But there was a useful bit of software to help me get down there.”

Even more important, though, was creating the violin solo played by Yi, which serves as the emotional core of the score, if not the film itself. “I met with [writer/director Jill Culton] two-and-a-half years ago and we spoke about how the character felt about her violin, her connection to her father, and this tune that she was always reaching to play — a melody that he had taught or had played to her when she was little,” he says. “We spoke about different scenes where she would play or quote part of it until it was fully realized at the Leshan Buddha, about three-quarters of the way through the film.”

Because the melody was so integral to the story, Gregson-Williams composed it very early on and gave it to the animators, who drew upon video of violinist Charlene Huang to animate the hand movements. “The attention to detail from the animators was amazing,” he relates. “Normally in these scenarios, even in live action, you see people playing the fiddle and it’s quite embarrassing. They were terrific in animating all the fingerings and bowings as accurately as possible.”

Animators were also concerned with finger positions for the French animated film I Lost My Body, from Xilam Animation, but for an entirely different reason. The festival favorite — released in the U.S. by Netflix — is about an ambulatory severed hand. While using voices to represent a hand would seem incongruous, composer Dan Levy concentrated on different instrumentation and chord progressions to highlight different moods and emotions. “When I started to compose some music for the movie, the storyboard and animatic were very abstract, so I had to use my imagination to envision what the final film would look like,” Levy says. “I wanted the music to help guide the audience through the layers of the film with ease. I used the flute to represent childhood, the arpeggio to represent the mechanism of destiny, and strings to represent the love story.” 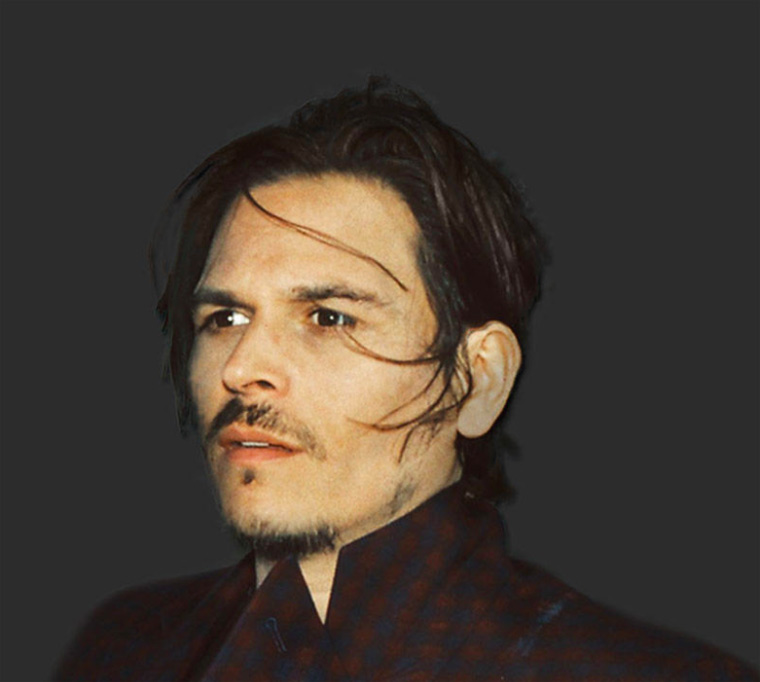 SPA Animation’s Klaus, which is also being distributed by Netflix, offered composer Alfonso G. Aguilar his first experience scoring an animated film, as well as the chance to employ a super-sized orchestra. “It was huge,” Aguilar says, “it was 145 people! [The standard-sized orchestra for a film is 65-to-85 musicians.] What I did was mix many wind instruments so that they sound as if they’re only one, and we got that ‘Northern’ sound.” To highlight that sound Aguilar employed an instrument that is very unusual for a symphonic orchestra: an ocarina. “The ocarina represents the wind,” he explains, “which is Lydia, Klaus’s wife. It sounds amazing because it is very organic and warm, and feels like if you were blowing into your hands.”

The composer sites a sequence in which the frosty townspeople began to thaw a bit as the biggest challenge of the film. “It’s the point in which the town starts evolving from the evil and the war ambiance that they had into kindness,” he says. “The name of the sequence is ‘Changes,’ and it’s funny because we changed the cue 42 times until we arrived at the concept.” Aguilar adds that he rewrote one of the discarded versions to create a separate suite that is not in the film, but will be included on the album. 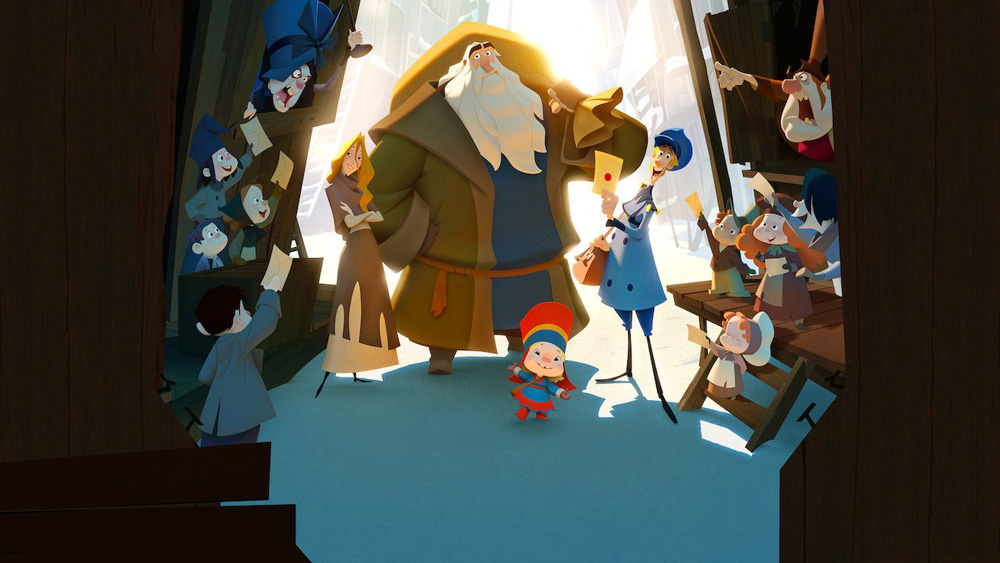 Any discussion of music scoring has to include serial nominee Randy Newman (winner for Monsters, Inc. and Toy Story 3), who is back this year for Disney/Pixar’s Toy Story 4. Newman’s biggest competition for that, however, is not any of the other animated feature composers, but rather himself, given the buzz (pun intended) his score for the live-action dramedy Marriage Story has been generating.

The time between the announcement of 2020 nominees and the Oscar-cast on February 9 is shorter than ever, a little under a month. It’s safe to bet, though, that some animation composers will spend those weeks singing. Maybe even humming.

Academy Award nominations voting is now open until January 7. Nominations will be announced on Monday, Jan. 13. The 92nd Oscars will be held on Sunday, Feb. 9.

The following songs from animated and related pictures have made the Oscar shortlist in the Best Original Song category:

* Nominated for the Golden Globe for Best Original Song