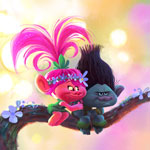 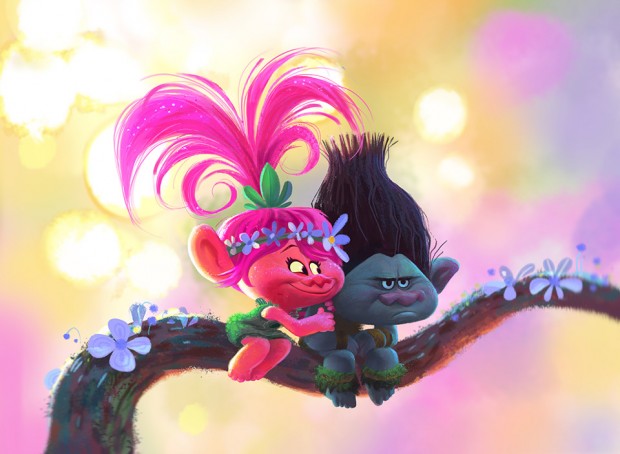 Trolls jumps from a well-known but undefined toy store staple to the big screen with a big splash of color and music via DreamWorks Animation.

The ubiquitous toy Trolls, with their “cute-ugly” faces, stubby bodies and swirling tufts of, are familiar to almost everyone and yet known not at all. Created in 1959 by Danish fisherman Thomas Dam, the Trolls have surprisingly never been adapted to books, TV or movies, making them a rare opportunity for filmmakers: a well-known property that is also a completely blank slate.

It was that combination that excited director Mike Mitchell when DreamWorks Animation founder and CEO Jeffrey Katzenberg presented to him the opportunity to develop and direct a Trolls movie.

“I just went crazy for it,” says Mitchell, who previously directed Shrek Forever After, as well as Alvin and the Chipmunks: Chipwrecked and SpongeBob SquarePants. “It really gave us a chance to create a whole world, a whole land and a whole story and a whole backstory for these creatures that didn’t exist before.”

The starting point for the movie was the idea of happiness — what it is, how to get, what happens when you lose it. “We thought it was important in these kind of, times of turmoil, I’ll just say — social unrest — that we could have a film that could deal with the issue of what does happiness mean,” says Dorhn, a fellow veteran of the Shrek and SpongeBob franchises.

It also gave Mitchell a chance to bring to a CGI film the surreal, fairy-tale esthetics he admires in the movies of Hayao Miyazaki and in the Cartoon Network TV series Adventure Time.

“He just creates a completely unique world that I’ve never seen before — and on top of it he populates it with creatures I’ve never seen before, and they all seem to fit within those worlds. There’s a real continuity to it,” Mitchell says of Miyazaki. “Wouldn’t it be great to honor that and be inspired by it but at the same time still give it that Western influence and really strange irreverent comedy?”

Throwing those ideas in with the surreality of Adventure Time and other influences from Jim Henson and Dr. Seuss to the 1970s and Sid and Marty Krofft resulted in a world that was handed off to production designer Kendal Cronkhite to execute.

The result is what the filmmakers ended up calling “fuzzy immersion”: a world that looks handmade with everything covered in brightly colored natural fibers — mostly felt — yet also photorealistic and deep at the same time.

“CGI technology is so sophisticated now and so realistic, you can make anything look super real,” says Mitchell. “So for this, we wanted to take that technology and go a different way. We made these creatures they’re like Gummi Bears that have been flocked in velvet. Instead of making a realistic tree … we wanted to cover that tree in felt, and every leaf in felt and maybe the ground is carpet and even the rocks are felted and even the dust and all the effects kind of follow this kind of handmade natural fiber material look that is basically just surfacing, but it’s surfacing I haven’t really seen explored.”

Into this setting is a story about Poppy, the happiest of all Trolls, and Branch, the only pessimist in the group, who must team up to go rescue Poppy’s friends who have been picked off by the hungry Bergen for snack time.

“So Trolls, they would represent everything that is happiness, and then of course you need the flip side of that and so we have these other creatures — in a classic fairy tale way — these monsters that eat Trolls, so they’re miserable and they’re on the other end of the spectrum,” says Mitchell. “The trolls are optimists, the Bergen are pessimists.”

Mitchell denies any similarity between Shrek and Trolls, aside from the the irreverent comedy and incorporating musical elements — the latter being done in a more direct musical genre fashion than in any previous DreamWorks features.

“It’s not a musical in the traditional sense of a musical,” says Dorhn. “It’s more of a jukebox musical with familiar songs — even though there are original songs as well — but it definitely doesn’t adhere to the traditional musical rules.”

The movie scored a coup in casting the multitalented Justin Timberlake as Branch and he so liked the movie that he agreed to be its music supervisor.

“He was really eager and tapped right into what we were doing and improved what Walt and I were doing,” says Mitchell. While the filmmakers had already chosen songs from different eras they thought fit the movie, Timberlake was able to bring a more refined sensibility to those decisions while also contributing to original songs. “He gave it a cohesiveness,” says Mitchell. “It doesn’t feel scattered. All these song they really hold together for the story.”

Moving the feature into animation revealed some unusual challenges for the directors. While the characters retained the “ugly-cute” expressions and bodies of the original dolls, their proportions — big heads with small bodies — proved difficult for layout and for animation.

“For layout, it was hard to do an over-the-shoulder (shot) when you’ve got a gigantic melon head,” says Mitchell. It also was hard for the Trolls to hug each other — something the script decided they do every hour on the hour.

And making them move convincingly — and dance — was an animation challenge the production overcame steadily but surely.

“They’re not normal proportions, but we can defy gravity with the dances,” says Dorhn. “We can do all these wonderful things that you couldn’t do in live action, so we used it to our advantage.”

Mitchell praised the skill of the animation team for avoiding the many pitfalls presented by making animated characters dance.

“It sometimes can have a very off-putting … rotoscoped feeling, where it’s like a character that’s wearing a suit rather than your character itself,” says Mitchell. “We did have a choreographer, but (the animators) would just look at it as reference. They were so clever they could just watch it and then they could apply it but they’d put their own spin to it.”

The crew also enjoyed the freedom that came from there being no previous movie or TV show to emulate. “We were snappy when we wanted to be snappy and when it was time to be realistic, we could be a little more realistic,” says Mitchell. “There were no rules to that other than what the story needed.”

The production was the first to use DreamWorks’ proprietary long-hair simulation tool, Willow. Dorhn says he and Mitchell both expected hair to be a major technical issue on the movie and were happily surprised when that turned out not to be the case.

“Hair is the Trolls’ superpower,” says Mitchell. “They can grow it, they can change its shape, they can stretch it and maybe use it like a monkey tail to swing, they can use it as a whip, they can change the color of the hair, change the texture of the hair, they can disguise themselves with hair. And I was convinced this is going to be such a huge challenge, and guess what? They didn’t blink an eye at any of that stuff! It turned out glitter was what stumped everyone.”

Glitter is very important to Trolls, who constantly toss it around in celebration of their perpetual happiness. “The computer didn’t understand glitter,” says Dorhn, who says he and Mitchell focused on creative and trusted their collaborators to solve the necessary technical issues. “We would go downstairs to our tech teams, and they’d be in white lab coats throwing glitter at each other and writing code.”

Rocking the production was the shuttering in January 2015 of Pacific Data Images, the Redwood City, Calif.-based production studio that had been a part of DreamWorks Animation since 2000. With most of the Trolls team at the facility, Mitchell says he had to ask many many members of the team to move to Glendale, Calif., to stay with the project. Much of the crew — including Cronkhite and her team — made the move and, with production complete, consider working on Trolls one of the most pleasant of their careers.

“I just ran into one of the guys who moved down here, Philipe Denis, the head of our VFX,” says Dorhn. “I hadn’t seen him in a little while and he says, this is the best production he’s ever been on. And that feeling of happiness came from the crew. Everyone had a really good time on this one.”

Mitchell seconds that, saying the level of collaboration on the movie was unprecedented and essential to its success, with even Timberlake sitting in at editorial and contributing to the process.

“I think it’s the future of filmmaking because it’s certainly the way Marvel makes films. It is really a group of people working together to make something amazing in a big group,” he says. “(Timberlake) didn’t go off and make his songs and then come back to us. He was part of our decision-making team.”

Trolls also happens to be the end of an era for DreamWorks Animation. With the company’s sale to Comcast, Trolls is the last DreamWorks Animation film for studio founder Katzenberg. “I’m so honored that this is his last film at DreamWorks,” says Mitchell. “I think his greatest skill is he represents, somehow, middle America and how they’ll react to a joke and how they’ll understand a story. Walt and I love to show our films to an audience, because we just like to hear what the laughs are and when they’re with the film and when we lose them. Jeffrey is just like the test audience. … He was involved, but he never dictated anything, he just pointed out challenges and let us solve it.”

With the film finally ready to roll out to the public, Mitchell and Dorhn are both pleased with early response to the film. “Most people say after watching it feels like they were just at a party, and I can’t be more proud of that because that’s what we set out to do three years ago,” says Mitchell.