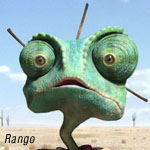 It was another relatively quiet weekend at the box office, with only the new thriller Limitless outperforming the animated feature Rango, which continues to perform well in its third weekend of release.

Relativity’s Limitless, which stars Bradley Cooper, opened with a $19 million weekend, followed by Rango at an estimated $15.4 million. The animated feature directed by Gore Verbinski and starring the voice of Johnny Depp has so far grossed $92 million domestic and about $47 million overseas for a worldwide total of $139 million.

Rango managed to topple last weekend’s champ, Battle: Los Angeles, which made $14.6 million in its second weekend out.

New releases The Lincoln Lawyer and the sci-fi themed comedy Paul opened in fourth and fifth place with $13.4 million and $13 million weekends, respectively. Paul has already made $25 million in foreign markets, so its U.S. opening pushes its total gross to $38 million.

Slipping down to eighth place in its second weekend out is Mars Needs Moms. The Disney-released film, which was made by Robert Zemeckis’ ImageMovers Digital using motion-capture technology, only made $5.3 million. One of the most obvious recent box office flops, Mars Needs Moms has grossed $15 million domestic and $2 million overseas.

The picture is much greener for Gnomeo and Juliet, which earned $2.4 million in its sixth weekend of release. Finishing the weekend in 11th place, Gnomeo has  grossed $93 million domestic and $53 million overseas for a solid $147 million total.

The box office should get a shot in the arm next weekend with the arrival of Zack Snyder’s Sucker Punch and Fox’s Diary of a Wimpy Kid: Rodrick Rules.