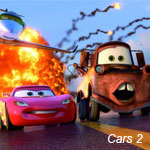 John Lasseter and his A-Team at Pixar up the ante for Lightning McQueen, Mater and the rest of their four-wheel buddies in the summer’s highly anticipated sequel, Cars 2.

Far too many sequels consist of the filmmakers and studio taking a victory lap in which a hit film is tweaked slightly while everyone waits to cash-in on the sure-fire success. But resting on past laurels is just not in the DNA of Pixar Animation Studios, which ventures into sequel territory for only the third time in its history with Cars 2, due for release in stereoscopic 3-D in theaters June 24. 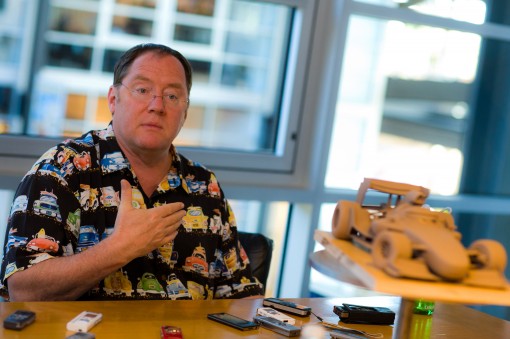 Directed by John Lasseter, with an assist from Brad Lewis, Cars 2 takes a sharp turn into the action and spy genres as Lightning McQueen, Mater and pals stumble into an international espionage case while traversing the globe competing in the World Grand Prix and racing through the streets of Tokyo, Italy, Paris and London.

Revisiting the world of Cars was irresistible for Lasseter, who has a full plate as chief creative officer of both Pixar and Walt Disney Animation Studios. “The first movie was very personal because … my father was a parts manager for a Chevrolet dealer,” he says. “I grew up in a car dealership, I worked there on weekends and summers all through the heyday of the great American, Chevrolet muscle cars. I have motor oil running through my veins.”

The idea for Cars 2 was planted when Lasseter was promoting the release of Cars in 2006 and kept wondering how McQueen and Mater would react to things like the autobahn in Germany or the massive roundabout at the Arc de Triomphe in Paris.

Lasseter also says he loves the spy genre, from watching The Man from U.N.C.L.E. as a child through sharing a love for The Bourne Identity and its sequels with his five sons. While making Cars, there was a scene that was eventually dropped in which McQueen and Sally go on a date to a drive-in theater to see a spy movie starring the dashing Finn McMissile. And the spy genre with its exotic locales seemed the perfect pretext for getting McQueen and Mater into an action story that spanned the globe.

But even more than those elements, the film coalesced around an emotional core centered on how traveling the world would affect the friendship between the cosmopolitan McQueen and his small-town buddy Mater, who sticks out like a sore thumb in the glitzy world of international racing. Lasseter says this idea was driven home when he was in Milan for the Italian Grand Prix researching the movie and was invited to a glitzy Formula 1 party to which he arrived dressed in his typical jeans and Hawaiian shirt. “It dawned on me when I got to the party, ‘Wait, this is Milan, this is the home of Armani, and couture and models and all that.’ I walked in and felt like a country bumpkin, an American country bumpkin in this place. I just really felt out of place.”

Everyone who works at Pixar talks about the primacy of story and how it defines everything else about the movie. In the case of Cars 2, the defining element was the massive scope of the film and the complexity of bringing to life the intricate details required to tell this story. “This is probably more complex by a factor of 10 than any other Pixar film,” Lasseter says. 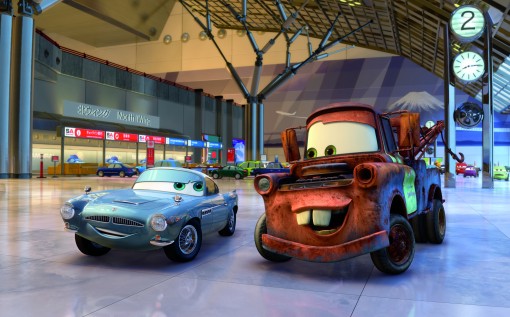 Among the not-insignificant details is the task of getting permission from automakers to use their cars in the movie. Producer Denise Ream says about 30 car companies agreed to let Pixar use their models in the movie, with the villain of the movie being a model from a defunct automaker. The easiest models to clear were the Gremlin and Pacer, used for the henchmen characters Grem and Acer, she says.

Some of the most fun details are in the look of the Cars 2 world, where many familiar places are slightly tweaked and “Cars-ified” to make sense in a world where there are no people, only cars. Production designer Harley Jessup says sharp-eyed viewers will spot car-influenced design tweaks to landmarks such as the Eiffel Tower, Notre Dame, Parliament and Big Ben—which becomes in the film “Big Bentley.”

But two of the cast members from Cars died before the making of Cars 2: Paul Newman and George Carlin. Ream says the film will feature a tribute to Newman—”We felt he was someone we could not replace,”—while Carlin’s smaller role was recast. 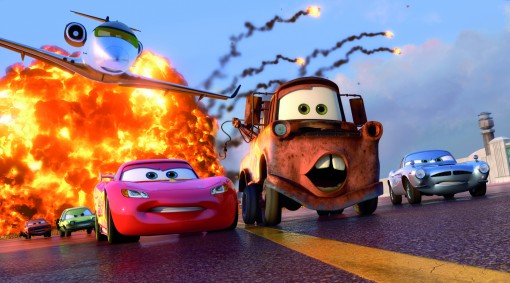 Apurva Shah, supervising technical director on the movie, says the film had about 120 original sets and more than 150 original characters—all of which had to be built almost from scratch. “We knew right up front that given the scope of the film and to maintain the quality level of the films and what people expect—what we expect—from our work, we were going to have to work a little bit differently,” he says.

One key advance was developing the driving system, which kept animated cars on the same plane as the road and automatically calculated elements such as how fast the wheels needed to turn to look believable. Other advances included improving the look of the cars’ paint down to the metal flecks and doing more crowd work than in all previous Pixar films combined, Shah says.

Supervising animators Shawn Krause and Dave Mullins say there were plenty of challenges in making the film, from refining characters from the first film to the extensive crowd work, the usual dreaded deadline doom and finding ways to work as efficiently as possible with Lasseter given the huge demands on his time.

“A lot of what we do as supervisors is clear the path between all the stuff that gets between the animator and the director,” says Mullins. “When there were those moments where John couldn’t give feedback we just tried to have an open forum—not only with us as the supes, but also with other animators, and we actually had what we called animator dailies on the show.”

One of the most difficult sequences for the animators was one called “jet and sky,” which underwent so many revisions that animators were rotated in and out to work on it, says Mullins. “It was constantly changing for months,” says Krause. “You’d think, ‘Now it’s bulletproof,’ then there’d be a change in the storyline and it threaded through that sequence”

The animation crew started out at around 20 and swelled to about 80 at its peak, say Mullins and Krause. Shah says the rendering also was a huge challenge, and the film used 14,000 cores—almost three times what was used on Toy Story 3.

Additional innovations were made in visual effects, especially the handling of water. Pixar previously dealt with water on Finding Nemo, but that film took place mostly underwater, and rendering water surfaces was still something that needed some work. “We wanted to achieve a surface water like we’d never seen before,” says Lasseter. “There’s a scene in Italy, where they have that transparent blue water like they have in the Mediterranean, and you think it’s real. That’s a real significant advance.”

Oscar-winning composer Michael Giacchino steps in for Randy Newman on the sequel and sought out new themes and developed a sound he calls “British surf guitar” to reflect the switch to the spy genre. 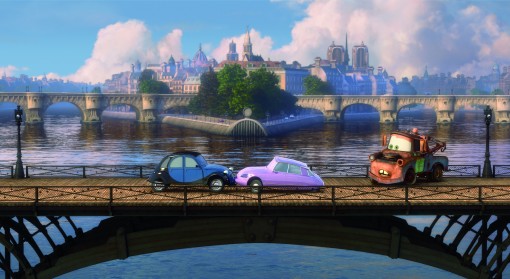 Switching genres also changes the target audience, with the spy action sequences skewing Cars 2 ever so slightly older. There was consideration given to how far Pixar could take the action, and one early sequence in the film includes a car getting mashed into a cube via a compactor. Ream says nothing in the film is gratuitous, with Lasseter adding, “Cars can always be fixed.” In the end, the director says Pixar makes its films for everyone.

“We focus on each story and telling a great story,” he says. “These films are family films, that’s what we make.”