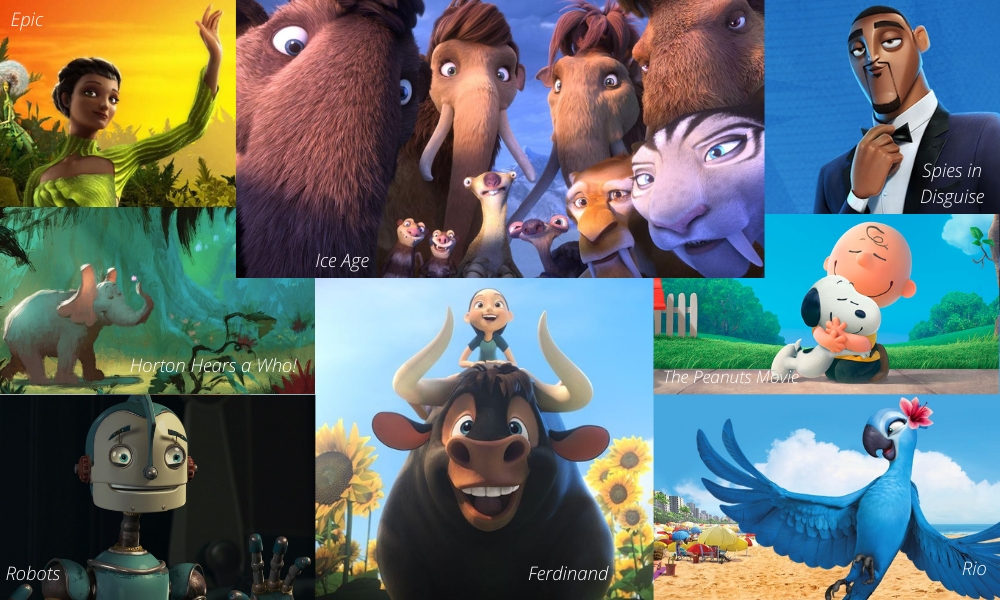 The building was the size of a city block, plunked down in rural Greenwich, Connecticut. You could spend an hour walking the place, observing the different cultures of each department, the different crafts and artsy posters on display. It was arguably one of the most impressive animation studios in which we New York commuters had ever worked.

Disney has owned Blue Sky Studios, the only current East Coast feature animation house, ever since it acquired Fox on March 20, 2019. On February 9 of this year, Disney announced that it would shut down Blue Sky after 34 years of operation (the studio opened in 1987) and 13 feature films. And so, an era has ended. I had the unique experience of both working at Blue Sky — briefly, in the storyboard department for the movie Epic — and then writing its definitive art book (The Art of Blue Sky Studios, Insight Editions, 2014). Here’s what I learned, in a nutshell (no Scrat pun intended), as an insider.

Par for the course, Blue Sky started with advertisements. This was around 1990, when CG was still learning to walk. It was the first to animate M&M’s characters in CG, talking to sitcom stars. All of the studio’s commercials looked startlingly realistic, straight out of our actual world (something beyond even Pixar’s purview at the time). For that, Blue Sky landed gigs splashing its animation seamlessly alongside live action — the cockroaches in Joe’s Apartment, the penguin in Fight Club, the singing dead fish in The Sopranos, and so on.

What they possessed was a proprietary program for life-like lighting, developed by programmer Dr. Eugene Troubetzkoy, with digital film recording technology by electrical engineer Carl Ludwig. Michael Ferraro was the systems specialist.

“The very early days of Blue Sky were us sitting in a 900-square-foot office, just programming, myself included – four of us,” Chris Wedge told me in 2013. “After a while they would be writing code, and I would be exercising it, so for a year or two they said, ‘You can do this with the code. Try it out!’ and I’d try it out. I could make a shape, I could make another shape, I could put shapes together. I could put a surface on it, I could make it look like it cast a shadow. Month by month, year by year, we started building up these capabilities, building the software. You couldn’t buy this stuff back then. Everybody’s stuff was proprietary. It was forward-engineering. We were making it from scratch.”

The ultimate breakthrough was “Radiosity,” the way light bounced off surfaces and (gasp!) textures – this made their worlds believable and immersive. And this made the short film Bunny (1998) look real. Wedge’s direction gave it heart. The combination led to an Academy Award.

Blue Sky’s rendering of fur was a huge breakthrough in the 1990s (how much fur do you see in Pixar’s Toy Story?) and so the studio ran with that into Ice Age (2002). The studio attests that the Ice Age film series is (or was in 2013) the most popular animated film franchise globally. They said that its themes of mixed family dynamics, of love overpowering dysfunction, transcend borders. Oh, and apparently the side-character-as-a-running-gag shtick? The folks at Blue Sky looked at DreamWorks’ sidekick characters and pointed to their own Scrat v. Acorn saga with a boastful, “We did it first!”

A Haven for Artists

The artists were truly the stars of Blue Sky. The films had visual development by modern masters like Peter de Sève, William Joyce and Mary GrandPré. But everything that made it to screen had a level of artistic integrity. The Rio films look and feel like Rio. Brazilian-born director Carlos Saldanha has become, I was told, a national hero in his homeland. The directors of Horton Hears a Who! were blessed by Dr. Seuss’s widow, and created a whole Seussian style guide. The Charles Schulz estate toured the studio and worked closely in pre-production of The Peanuts Movie. They were wowed by the talent on site! (I know because I was there.)

It was hard not to drop your jaw in wonder. Turn the corner and there was a mannequin wearing a replica of Bomba’s gizmo-covered outfit from Epic. Over to the other side was the amazing room of maquettes. If you wandered over past the sweatboxes (yes, that’s what they, too, called the screening rooms) to the story department, a wall of staff caricatures going back years stretched the length of the hallway. The animators’ bay was particularly remarkable — some ambitious folks had constructed walls around their workstations to resemble tree houses, a pirate ship or a hunting lodge. In my wanderings, I even uncovered some artwork for an unproduced animated shorts program.

There were people who had been there since the beginning, and others who had been industry veterans since the 1980s. Since many of the staff commuted and shared a company shuttle, people mingled who otherwise wouldn’t have met. It created a summer-camp culture of sublimely talented people.

One wall near post-production sported a poster mapping the “History of Animation.” It’s funny. About 50 years stretched between the last big East Coast animation house (Fleischer Studios) and Blue Sky. No film studio close to Blue Sky’s magnitude has graced this side of the world, and probably none will again. But that chart is already out of date. Blue Sky belongs on that poster. Its place in the History of Animation is undeniable. And the films — as well as the memories – will live on.

[Ice_Age.jpg] cap: Scrat as he appears in the Ice Age Films and as illustrated by Peter de Sève.