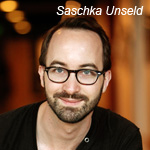 Pixar Animation Studios has a long history of bringing the improbable and inanimate to life with the latest in CG technology. The studio’s latest short, The Blue Umbrella, builds on this tradition and imbues it with fresh imagination, plus all the emotive storytelling and jaw-dropping animation artistry audiences have come to expect.

Conceived and directed by German-born filmmaker Saschka Unseld, the film unfolds in the hubbub of a city’s evening commute. As rain blankets the urban scenery, it brings the familiar alive in a novel way, as do the Red and Blue umbrellas who are the heroes of the romantic story, falling in love amid the symphony of plinking raindrops and whirling gutters. The short is produced by Marc Greenberg, who has been with Pixar’s feature department since starting out as a production accountant on Ratatouille.

This is Unseld’s directorial debut at Pixar, which he joined in 2008 to work in camera and staging for Toy Story 3, Cars 2 and Brave. After graduating from the Animation Institute of Ludwigsburg, Germany in 2003 he co-founded Studio Soi, where he produced and directed short films and commercials. Passionate about film, Unseld says it took him a full year to develop the short’s story before he was ready to pitch to the Brain Trust, and another year before they were able to begin production.

“There’s kind of two and a half inspirations behind the core idea I had,” says the director. “A couple years ago, I was walking through San Francisco and it was one of those days when it’s actually raining in California—and suddenly I saw something lying in the street, in the gutter: a broken and drenched umbrella. I took a picture because it was incredibly sad and abandoned. I started to think of what happened to him, what could be his story and what could happen after that moment—because it wouldn’t be a nice ending to a story to have him lying in the gutter with no one caring about him.”

Unseld adds that in thinking about the story he began to ponder what rain symbolized to him, noting that in Hamburg where he grew up it rained often, and that it lent a certain charm to the city.

In addition to exploring the character of rain and how it affects an environment, another key element was showing how the inclement weather brings the city to life. Unseld produced test footage where he shot pictures of objects that looked like faces on his phone and animated them to illustrate the concept.

“When I pitched the idea, I showed these tests. Every time these characters came to life everyone was kind of amazed at that magical moment of something you perceive as being inanimate coming alive and being something you emotionally connect to.”

Complementing what the director calls this “slow descent into this magical world” is the progression of the film’s animation style from a photorealistic opening to a lusher, bolder style as the rain’s transformative powers take hold. Unseld notes with pride that in test screenings to outside audiences the viewers always asked how much of the film was live action–the answer, of course, is none of it. Inspiring the shifted color palette and visual design as the story unfolds was mainly the work of admired photographers and live-action directors like Wong Kar-Wai, particularly his In the Mood for Love.

The filmmakers also took a slightly different approach to producing the animation. Notably, the short helped spearhead the much-lauded new global illumination technology showcased in Monsters University. The director also notes that the artists did much more work in compositing rather than in the 3D render, saying that shifting the definition of the film’s look to compositing allowed the crew more flexibility to lend a painterly approach to the photorealistic animation. They also did all the depth-of-field work in post.

While fewer than 100 people are listed in the credits for Blue Umbrella, Unseld estimates only about 20 people worked on it for the full year, as the Pixar shorts process has to work around crew availability during its three- to five-year feature productions. The director says it was a big change from his Studio Soi experience where 20 or fewer artists worked on every aspect of a film, and he had to get used to giving notes and walking away rather than being hands-on for everything.

“We’re using this massive, amazing production machine of Pixar which is meant for features, but doing something really short and agile. It’s like you want to go around the corner to go grocery shopping, but you have to take this massive aircraft carrier that takes a hundred people to set up to go there,” he observes.

With the complexity of his vision for the short, which involved massive amounts of textural detail in every shot, the director admits it was practically a guessing game of whether it would all come together until they saw the final render of the first shot. But, he says, the greatest animation challenge was achieving the subtlety of emotion needed for the tender story to translate—especially in the coy exchanges between the love-struck umbrellas.

“When Blue and Red meet for the first time and she sees that he’s staring at her, and he quickly turns away, there’s a really long two-shot of them kind of glancing at each other and trying to look each other in the eye, and there’s chemistry,” Unseld elaborates. “In that shot, so many really subtle things are going on–during the animation phase you could tell every tiny detail, but once we had the final render shot some of it just got lost because the picture is so lush and pretty to look at. The amount of movement you need in the face for the audience to be drawn to it we needed to amp up slightly.”

While Unseld will be kept busy showing Blue Umbrella at festivals in the immediate future, he assures that there are many of snippets of inspiration working toward new film-worthy stories he has in mind. Now that he’s enjoyed the attentive guidance of John Lasseter and Pixar Brain Trust in developing his directorial voice, who knows what intriguing concepts he might bring to animated life? But, Unseld emphasizes when asked for advice to other aspiring directors, the key is always to find a story which resonates with you emotionally.

“I would find it hard to tell a story I didn’t really care about … where I wouldn’t see myself reflected in some aspect of it. Finding these things in a film you’re making is really important, and finding your way of telling these emotional stories–telling a story you deeply care about and not just something that’s funny to look at.”

The Blue Umbrella opens in theaters June 21 ahead of Monsters University.