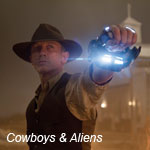 The latest ripple in the tidal wave of comic-book-based films hitting theaters this year may be light on spandex, but it’s big on originality (and opportunities for mind blowing effects work). Based on the graphic novel by Scott Mitchell Rosenburg (Platinum Studios, 2006), Cowboys & Aliens blends the harsh characters and landscapes of the Old West with slick sci-fi action—courtesy of vfx powerhouse Industrial Light & Magic.

The cowboys fight for their lives in Cowboys & Aliens.

The film, directed by Iron Man helmer Jon Favreau, is set in 19th century Arizona, where Jake (Daniel Craig) awakens with no memory and a strange device strapped to his wrist. After wandering into a nearby town, he discovers he is a wanted criminal—but soon a much greater threat appears, and he must team up with his enemies and unlock the secrets of his high-tech shackle to defeat the alien menace. Harrison Ford and Olivia Wilde also star.

When ILM animation supervisor Marc Chu found out he would be working on the film, he immediately set out to read the comic. “If there is a comic equivalent, I try to catch up and at least understand the source material,” says Chu, whose credits include the Iron Man films, Harry Potter and the Half-Blood Prince and three Pirates of the Caribbean flicks.

But [Cowboys & Aliens] is different from what’s in the comic, it’s completely fresh,” says Chu. Though the film starts out as a gritty Western with no alien baddies, he says it’s all part of Favreau’s strategy to win over the audience: “Once you feel for these guys and care about them…that’s when all hell breaks loose. 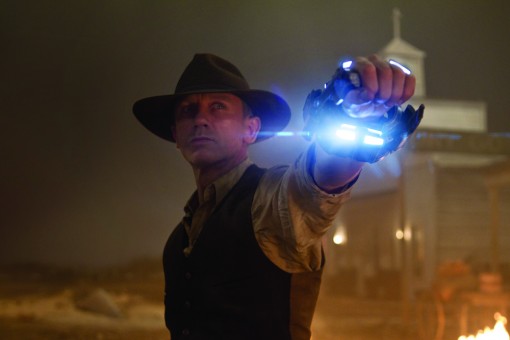 DANIEL CRAIG as a stranger with no memory of his past in Cowboys & Aliens.

The town’s first introduction to the evil space hombres is their body-snatching ships, which Favreau wanted to imbue with a personality of their own.  “He wanted to develop this language for the ships, so when you see them do a certain action you understand what they are going to do—whether they are going to attack, or snatch somebody,” Chu explains. “We had to find a good blend between making it unique and something you haven’t seen before, but flying realistically … That was something we spent a lot of time on.”

ILM lead animator Andy Wong was charged with overseeing guideline shots for the ships once the style of movement and animation was determined. From there, Vancouver-based The Embassy tackled the attack and abduction scenes featuring the ships, which Chu describes as being almost characters themselves. Southern Calif. shop Legacy Effects helped design the ships, as well as the alien creatures.  (Australian outfit fuelVFX also contributed to the film—including a noteworthy hummingbird sequence.)

Piloting these vicious crafts is a race of extraterrestrial beings bent on violence. The ILM team worked on several variations of aliens for the film, including a couple of “special baddies” revealed at the end. 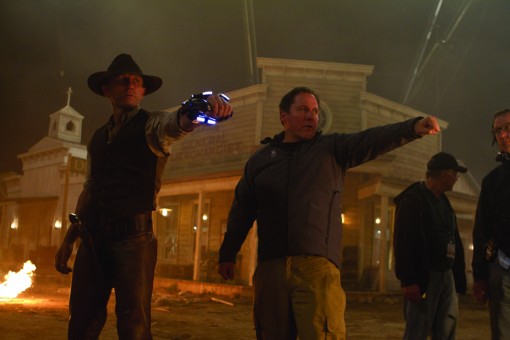 (L to R, foreground) DANIEL CRAIG as a stranger with no memory of his past and director/executive producer JON FAVREAU on the set of Cowboys & Aliens.

Jon really kind of let us cut loose on those shots. He had the confidence in our animation—and in our alien—to have him really act against the actors. To really get in close for a tight shot just on the face, spend as much time as you want there and really explore that acting element,” Chu shares. “Typically, you see aliens and you’re cutting to and from them—Jon didn’t want to do that. He wanted to have them front and center, cut from one to another, really build that emotional character development content.

To elicit this kind of reaction, the ILM team relied on a number of techniques. For starters, Chu was on set with the film crew in New Mexico for a month and a half, shooting footage for the film’s final showdown, using stuntmen and stand-ins decked out in the studio’s iMocap technology. The data captured on set gave the animators a solid, more grounded foundation to build on for the alien action—and gave the live actors something to work with in a believable way.

Once Legacy completed the early models and rig tests for the aliens, Chu and his team had a good idea as to their movement, speed and size, which was crucial to getting the correct live footage. “We also figured out that the alien was something we couldn’t mocap,” he recalls with a  touch of humor. “We went down to our mocap set and put animators in suits and had them run around like fools and applied them to the alien and showed it to Jon, and that was definitely not what he wanted. Everything with the mocap suit made them too human. We made the decision then that when we see them running around or jumping or attacking, that would be keyframe.” The iMocap suits were useful for shots where the aliens were in close physical contact with the live actors, allowing the animators to use that physicality with only minor tweaks. 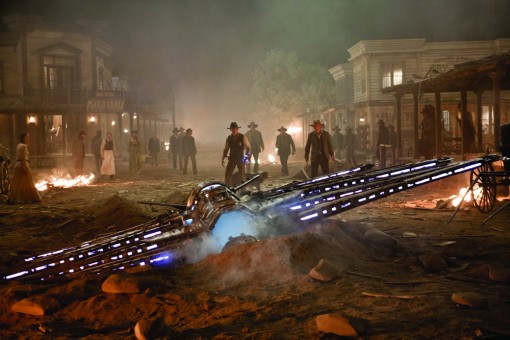 (L to R, foreground) DANIEL CRAIG as a stranger with no memory of his past and HARRISON FORD as the iron-fisted Colonel Dolarhyde in Cowboys & Aliens.

Because Favreau wanted to push for close, emotive shots of the ETs, all of the facial animation was also done with keyframe animation. Since a full-sized practical puppet of the alien (created by Legacy) was used on set, the director was mindful of the need for fluid transitions from practical to CG shots to keep the audience immersed. “Because animators are animators and want to throw in all the tricks that they have, sometimes that was too much for Jon. He would have us dial it back so you get lead into a CG world, instead of dropped into it from one shot to the next,” Chu explains.

This immersiveness and subtlety is something Chu, who won an Oscar for his lead character work on Davy Jones in Dead Man’s Chest, says improves with each film as technology ups the ante for skin, textures and rendering, helping bring fantastical creatures to life. “It gives us a lot of freedom and a really organic feel, and our animators had the freedom to explore that on this movie. To get the aliens right in front of the camera,” he marvels, “Nothing’s hidden! It’s all out there for criticism.”

For all the intensive keyframe animation involved in this project (about 400 animation shots, between the aliens and their ships), it’s amazing that a team of roughly 20 animators was able to complete the work—from pre-production, filming to post—in just over a year. The ILM crew used a combination of programs on top of a Maya base, utilizing proprietary plug-in scripts and tools to finesse the animation, including Zeno for simulations and rendering. 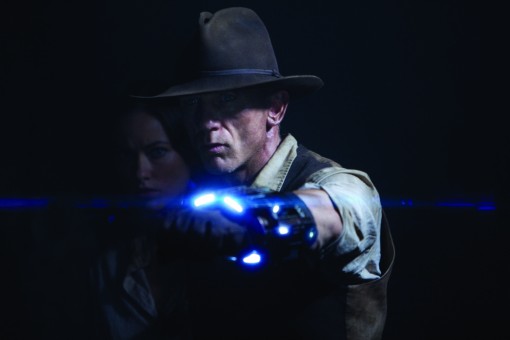 OLIVIA WILDE as the elusive traveler Ella and DANIEL CRAIG as a stranger with no memory of his past in Cowboys & Aliens.

Chu, who became involved with the project shortly after completing Iron Man 2, points out that in recent years more and more aspects of production have wriggled into the animators’ to-do lists. The supe was on set in New Mexico with director Favreau, DP Matthew Libatique and stunt coordinator Tom Harper working out story beats and developing the action sequences for the aliens—before pre-viz work was completed.

This on-set involvement is crucial on vfx-heavy projects, Chu points out, because it allows for a continuity all the way into post-production and keeps the film crew on the same page as the effects guys. “You get to help figure out the action and instill what you may have developed on the creature to the rest of the crew so they can understand the type of action they’re trying to film, whether they see it physically or not in the camera. It gets you into the mind of the production,” he says.

If they’ve filmed everything and we come back to ILM and we’re working on post-production and we go, ‘We need this shot, from this angle, looking this direction at this guy….’ Well, you didn’t film that…but with all the coverage that we got we can recreate it from scratch,” says Chu. “So, animators are becoming cameramen as well as having to animate. Obviously they’re really good with motion, so they understand what you’re trying to get and they’re always very savvy with screen direction and continuity. I think the roles of animators from five years ago are much different from what they are today—at least at ILM! We give a lot of responsibility, and we’re fortunate to work with a lot of great people. 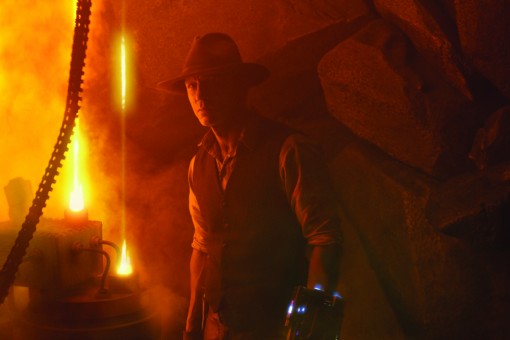 DANIEL CRAIG as a stranger with no memory of his past in Cowboys & Aliens.

Setting the time crunch and full plates aside for a moment, Chu picks out the film’s showdown finale as the most challenging aspect the ILM team tackled. With the aliens front and center, in tight facial shots and close-ups, the animators needed to craft something emotional, believable and able to create a visceral reaction in the viewer. “There was a real, definite character that we had to build and you wanted to feel something against this guy. And I think we achieved that,” says Chu.

He is also understandably excited to see how the film’s brash tackling of the creatures goes over with audiences, but more than that he’s just eager to see his crew’s hard work up on the big screen. “I’m totally proud of our animation crew, because like any of these shows, there’s a very tight deadline and—at least at ILM—a lot more work has fallen under the animators’ role.”

However, the supe isn’t daunted by the workload for this film. “It was really fun to work on,” he assures. “What sort of movie person doesn’t enjoy a good Western?”

There was a real, definite character that we had to build, and you wanted to feel something against [the alien]. And I think we achieved that. –animation supervisor Marc Chu