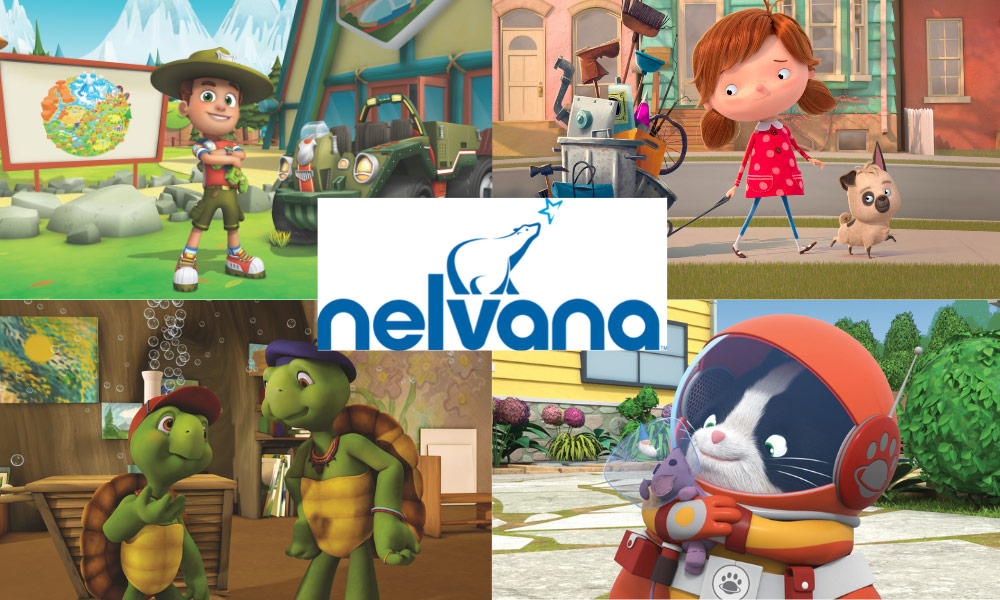 If you’re an animation fan, the image of a polar bear eying the North Star will immediately remind you of the famous logo of Canadian animation studio Nelvana, which is celebrating its 50th anniversary this July. Founded by Michael Hirsh, Patrick Loubert and Clive A. Smith, the studio is best known for a long string of animated TV series and features, many based on popular children’s books, which have entertained global audiences for five decades.

The list of quality animated hits from the studio is quite dazzling: Babar, Clifford the Big Red Dog, Rupert, Franklin, Rolie Polie Olie, Bob and Margaret, Donkey Kong Country, The Fairly OddParents, Cyberchase, Max & Ruby, Clone High, 6Teen, The Backyardigans, Beyblade, Mike the Knight, Bravest Warriors and Esme & Roy are just a few of the many outstanding titles Nelvana has produced through the years. And the studio, which is a subsidiary of Canada’s Corus Entertainment, is showing no signs of slowing down. 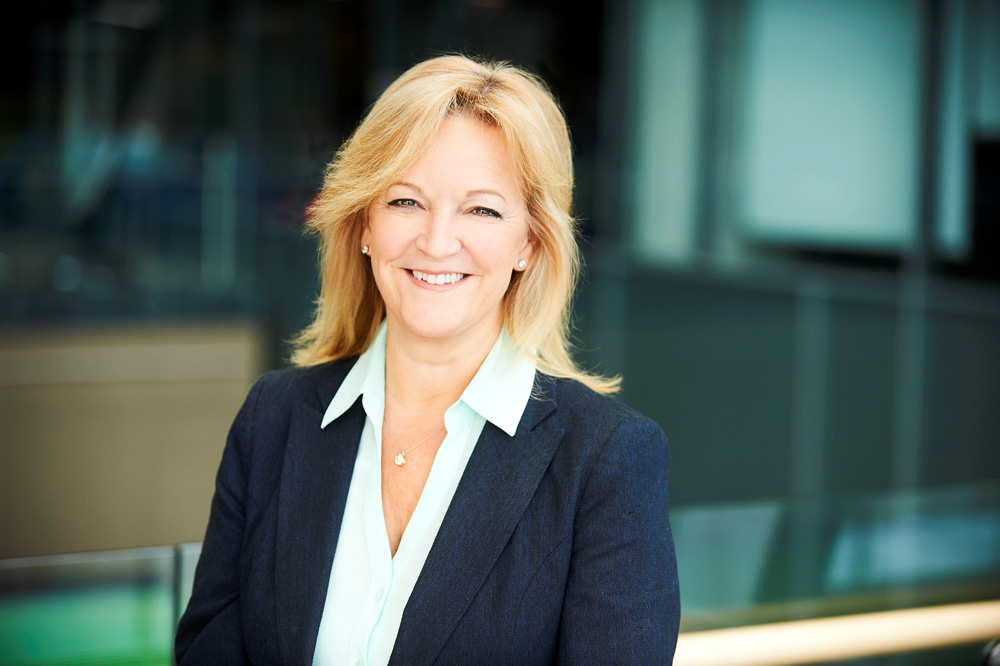 According to Nelvana president Pam Westman, who joined the company five years ago, the studio has been experiencing a highly productive period. “With a focus on improving our development slate, expanding our studio’s capabilities and maximizing the value of our vast catalogue, Nelvana has established an impressive portfolio of content bolstering our animation expertise and attracting some of the world’s best content production partners.”

She mentions the 2020 Emmy awarded to the studio’s in-house cloud-based VFX project management system Nelnet, the partnerships with Sesame Workshop on the show Esme & Roy, with Mattel on Thomas & Friends: All Engines Go!, with Nickelodeon on Ollie’s Pack and the upcoming ZJ Sparkleton and The Hamster Show, and hot titles such as The Dog & Pony Show, Agent Binky: Pets of the Universe and the recently announced Super Wish show. 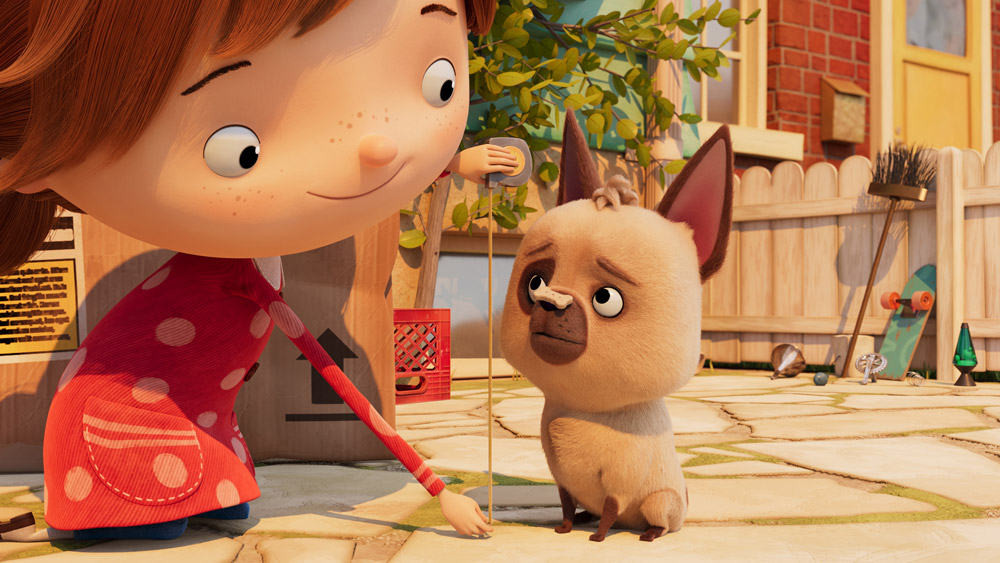 “We are expanding into new formats of content including digital-first shorts, with shows such as Miss Persona and Toon Bops, making it a priority to be where kids are consuming content, and feature films,” Westman notes. “We also produced our first-ever short film, The Most Magnificent Thing, which won 27 awards. The short kick-started our program to produce more short films in the future and allowed our team to push our studio’s capabilities both technically and creatively, translating key learnings to our other 3D animations such as Agent Binky.”

Among the Toronto-based studio’s priorities in 2021 is continuing its production of live-action series such as The Hardy Boys, which premiered on Hulu in the U.S. last year and has performed very well for Canada’s YTV as well. The studio is also expanding into theatrical films – having recently announced a partnership with Duncan Studios. “Ken Duncan actually started his career at Nelvana, which helps make this the perfect partnership,” says Westman. “We already have two movies in the works, including This Was Our Pact, produced with Duncan Studio and Peter Dinklage’s Estuary Films, which is based on Ryan Andrews’ award-winning graphic novel. This magical family adventure will be adapted by Wolfwalkers writer Will Collins. The second film is Mother Nature, a richly layered sci-fi fantasy set in a futuristic society.” 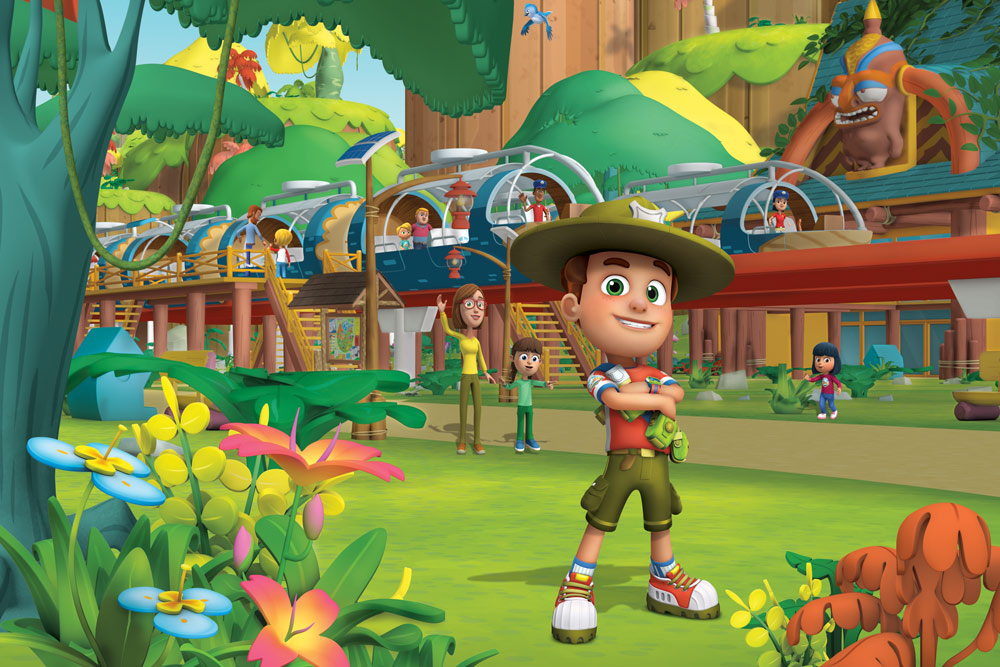 The studio, which currently hires about 300 and 325 employees, is also tapping into its in-house talent to develop more new concepts and IPs: A recent example is Super Wish, a new show that was created by Nelvana’s Vanessa Esteves and Emmy winner Adrian Thatcher. The 2D-animated series was greenlit through redknot, Nelvana’s joint venture with Discovery.

Westman points out that the studio is focusing on fostering in-house talent as well as continuing its relationship with global children entertainment entities such as Sesame Workshop, Nickelodeon and Scholastic. “We have amazing talent at our studio and access to some of the world’s leading creators of kids’ content yet because of some past merchandising hits, there is a misconception that we are more commercially minded,” she points out.  “However, we believe that great storytelling and merchandise success are not mutually exclusive, with dedicated teams championing both sides to find the right path forward.”

Another challenge is the constant need to attract and maintain top-tier talent in the world of animation. “With the animation industry consistently growing and changing, there is increased demand for high-caliber talent. We are always looking for unique stories and characters primarily, but not exclusively, in the preschool space. The perfect animated property for Nelvana is one that tells unique stories with multiple seasons distributed globally, challenges our animators in producing cutting-edge content, and drives a successful merchandise program. The ultimate goal is to produce an evergreen brand that is beloved throughout the world.” 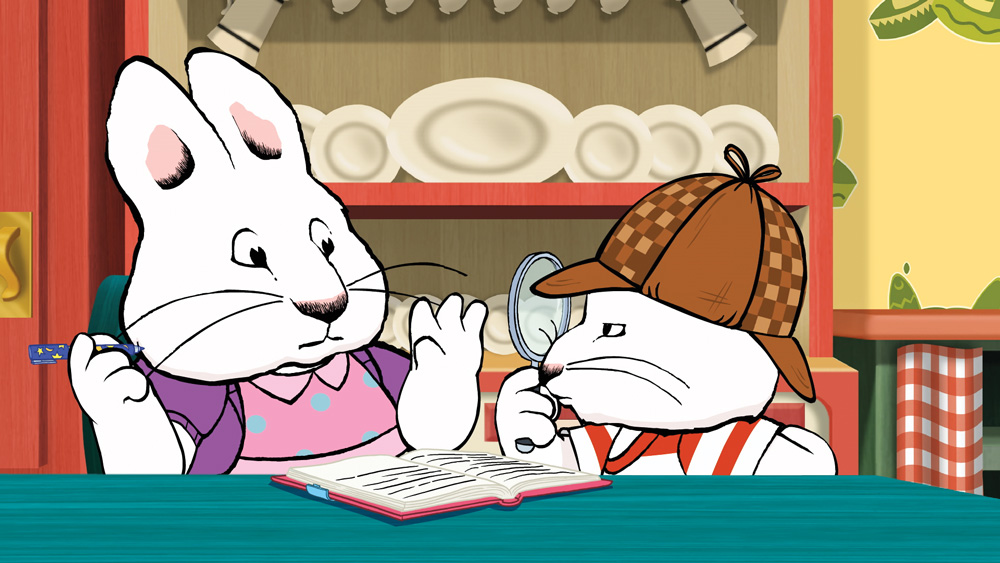 Westman, who came to Nelvana after many years as a senior VP at HIT Entertainment (former home of Barney, Angelina Ballerina and Thomas & Friends), says working in the kids’ content industry taught her the impact these shows can have on children across the globe. She recalls, “I knew immediately that even though I was focused on the business side, the content was what touched each child individually and those memories would remain with them for their entire lives. Not many other industries can give you that in your career!”

She says she loves the people who work at Nelvana because they are passionate about the children’s content industry. “They are creative and supportive of the art and of each other,” she says. “Their attitude brings joy to our everyday work life and you can see it on screen and feel it in the culture within the studio.”

“You have to love our evergreen brands Max & Ruby, Babar and Franklin,” Westman mentions. “They have stood the test of time and are loved by generations of kids. When you make shows that weave their way into the life of children and become loving memories, you have to celebrate that. I also have a special love for Agent Binky: Pets of the Universe as that series blends our Kids Can Press books with our studio talent and our Discovery partnership to produce a show that is gaining traction worldwide.” 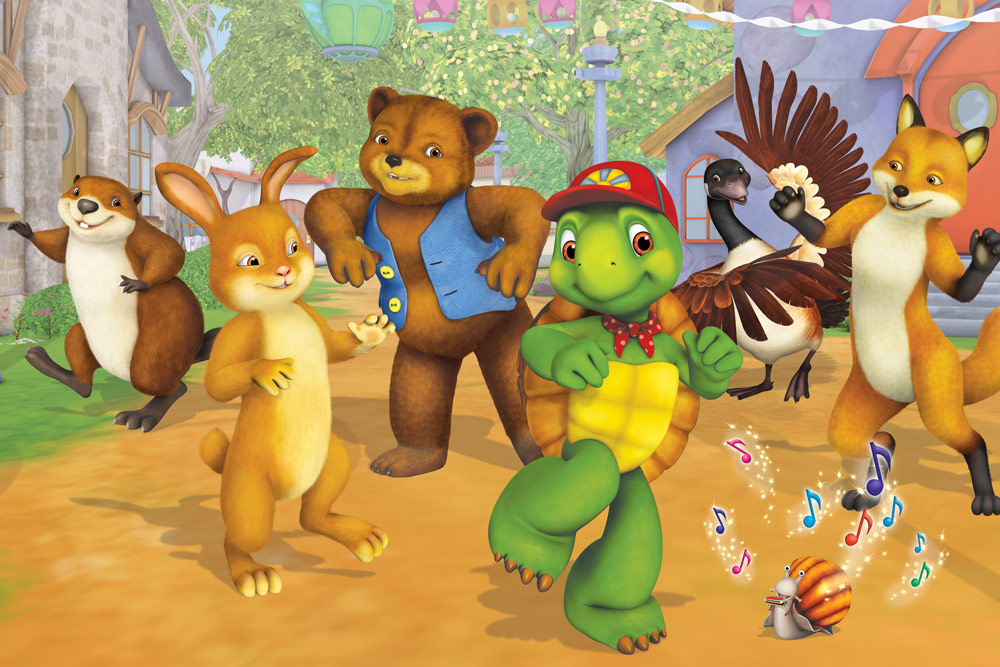 Looking forward to the studio’s future, Westman says, “It’s a great time to be in animation. The industry is continuing to grow rapidly and we are currently in an animation boom. Animation, for the most part in the Western markets, is made for kids, but I think we’ll see this evolving more in the future with widening the demo into more mainstream adult-targeted content.”

She’s also pleased with the studio’s quick response to the challenges of the pandemic last year. “We transitioned Nelvana Enterprises and Nelvana Studio to a safe working-from-home environment, shipping over 280 workstations to artists and crew members across the Greater Toronto Area, while keeping all seven current animation productions on schedule,” she says. “Also, working closely with the team to ramp up development, we jumped on the opportunity to connect with creators, writers and showrunners who would otherwise have been busy on set and greenlit over five new productions in the fall of 2020 and spring of 2021.”

Finally, what does Westman hope the animation community will remember about Nelvana, which was incidentally named after a Canadian comic-book superheroine created by Adrian Dingle in the 1940s? “The studio is creator-driven,” she notes. “We are always looking to partner with creators to find, develop and produce ground-breaking content, no matter the format. We are also placing a huge emphasis on nurturing our in-house talent. We’ve had so many animation greats who have started their careers at Nelvana and we are looking to foster the next wave of renowned talent over the coming 50 years!” 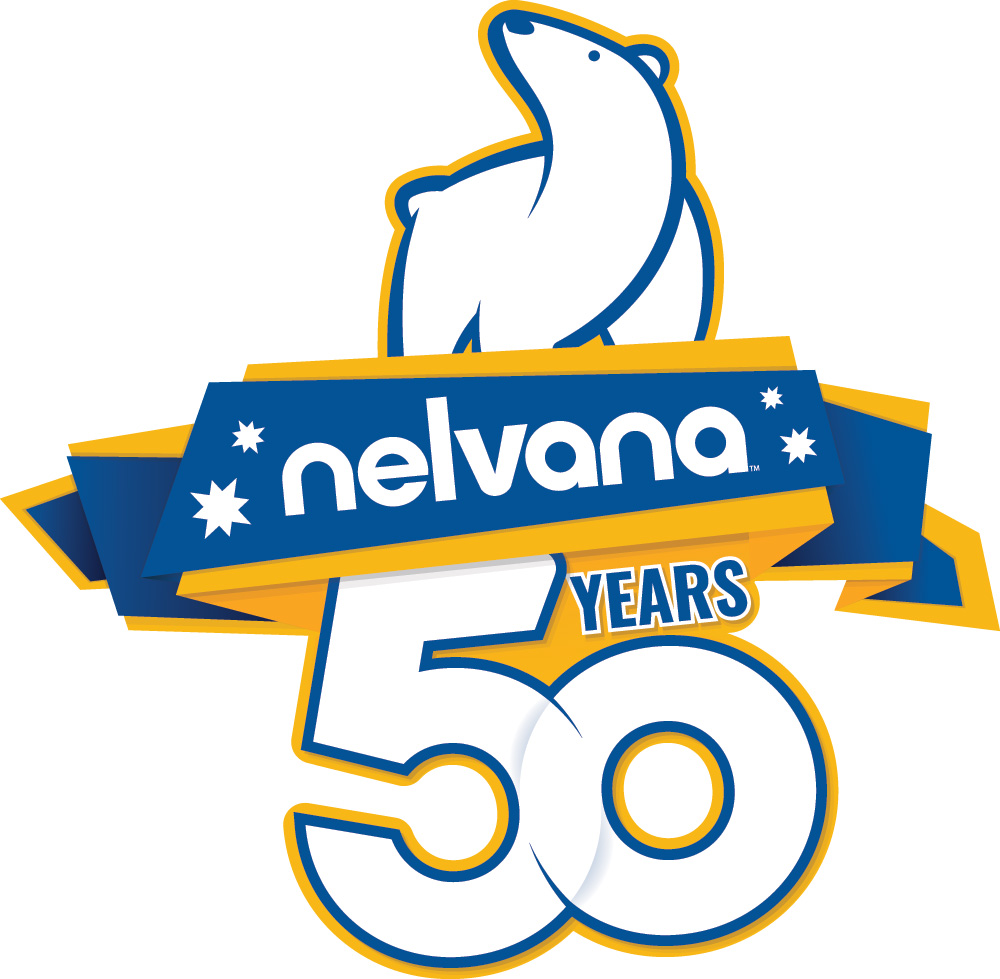 Out of This World

One of Nelvana’s hot new titles is the CG-animated show Agent Binky: Pets of the Universe. Based on the books by Ashley Spires, the show centers on a space cat who is on a mission to protect his human family from interstellar threats with the aid of four pets in a secret agency. The second season of the production, which is produced by redknot (a Nelvana and Discovery joint venture) will be launching in the spring of next year. As older preschoolers can appreciate fantasy and pretend, the creative team behind Agent Binky had fun envisioning the world through their pets’ eyes, playing at what they’d perceive as threats if they were actually part of an organized protective agency. The show is also part of Nelvana’s venture into CG fur and hair, using Maya’s interactive Xgen for the characters’ fur and hair grooms. 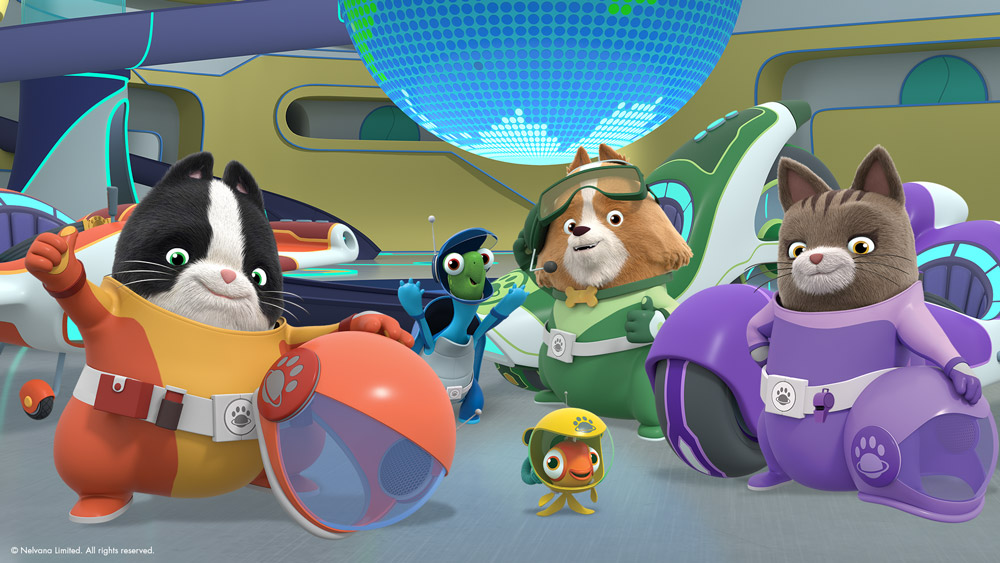