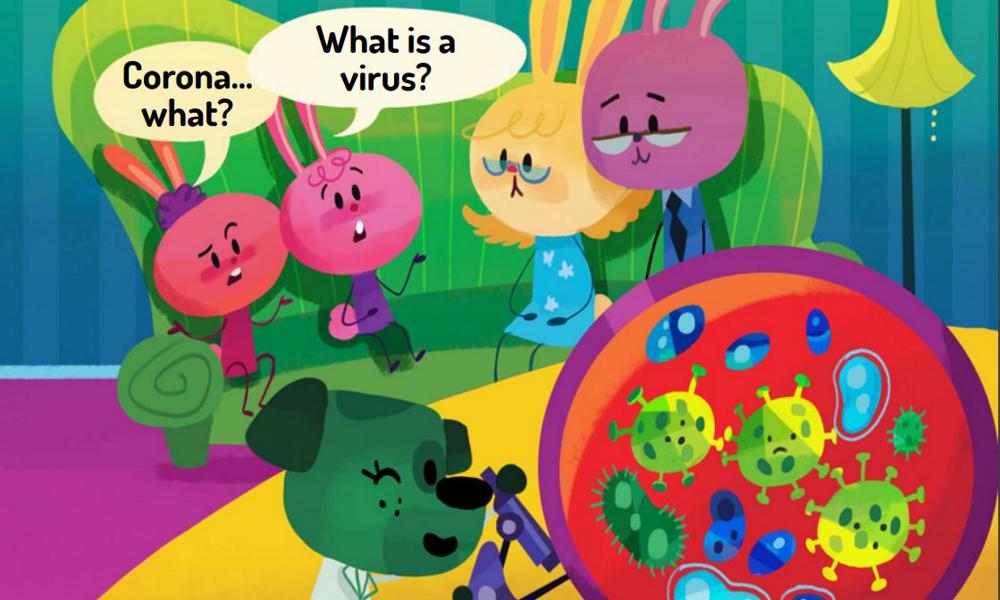 The Day When Everything Stopped

Netflix Introduces New, Original Series ‘All of Us Are Dead’
Based on the popular Korean webtoon Now at Our School, the apocalyptic adventure is about a group of high school students who are faced with an extreme crisis situation when they become trapped in their school, while a zombie virus spreads like a wildfire. Lee JQ (Beethoven Virus, Damo: The Legendary Police Woman, Intimate Strangers) is directing with Kim Nam-su; writer is Chung Sung-il.

NYICFF Short Takes: Let’s Talk About Animation!
Check out Tyler Pacana’s primer for kids 5+, How Does Animation Work? (Talking points: Name a film that you’ve seen using some of the methods that were described in the film: hand drawn, stop motion and CG animation.) Or, learn how to animate a bouncing ball with a quick, simple video lesson from flipanim.com.

Pixelatl Publishes Book to Help Kids Understand Coronavirus
The Day When Everything Stopped was published with the children of Mexico and Latin America in mind, but the collaborative book — created with the pro bono contributions of artists across Mexico and the help of children’s content experts like producers Joan Loft (Peppa Pig) and Marta Machado (Until Sbornia Takes Us Apart). Due to popular demand over the last two weeks, the free digital title is now available Spanish, English, French, German, Portuguese and Basque Euskara. Translations in Romanian, Italian and Arabic are coming soon.

2020 Licensing International Excellence Awards Nominees Unveiled
More than 600 entries were received this year from companies in 22 countries. Those submissions were judged by a panel of 152 executives from 20 nations to produce a ballot of 175 nominees in 23 categories of brands, properties and companies. Winners will be announced at Licensing Expo.

The nominees for Best Brand – Entertainment / Character – Animated are:

There’s Still Animation Work Out There & the WGA Wants It Covered by the Guild’s Contract
Writers Guild of America West leaders are reminding members that, as animation production rolls on in the face of coronavirus shutdowns, they’re covered in Toon Town.

“The necessity of social distancing has halted nearly all live-action production in our industry. However, many animated programs have continued production with crews working remotely from home. As a result, we have heard from members that studios and producers are increasingly interested in developing animated projects. This is an important moment to remind you that the WGA can and does cover writing for animation.

“If a producer tells you, ‘The Writers Guild doesn’t cover animation,’ that is simply not true. Many prominent animated television shows — on broadcast (Bob’s Burgers, Family Guy, The Simpsons), cable (American Dad!) and streaming (BoJack Horseman, Big Mouth, Disenchantment, F Is for Family) — are covered by WGA contracts. In fact, our Contracts Department recently negotiated deals to cover new animated series for Netflix (Q-Force, Hoops), Amazon (Undone), Apple TV+ (Central Park) and HBO Max (The Prince). The WGA also covers animated feature projects, including soon to be released Wendell & Wild for Netflix and The SpongeBob Movie: Sponge on the Run for Paramount.”

‘The SpongeBob Movie: Sponge on the Run’ Pushed Back a Week
The movie, which was previously bumped two months back to July 31, has now been scootched over to August 7 by Paramount Pictures. The family flick takes over the slot from Mark Wahlberg actioner Infinite, which will now open Memorial Day weekend.