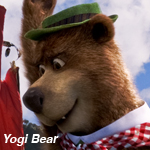 The first box office faceoff of 2011 may have lacked the type of fireworks Hollywood normally likes to trumpet, but the lack of major releases turned out to give a big boost to Yogi Bear.

The Warner Bros. 3D feature, which mixes CG animation and live action to bring the classic Hanna Barbera TV toon to life, moved up a spot to finish in fourth place with a $12.4 million weekend, a rare increase of about 57 percent over the previous weekend’s gross. The movie has so far grossed $65 million at the U.S. box office and about $3 million overseas,

Yogi wasn’t alone, with holdovers actually holding on to most of their audience if not increasing slightly over the Christmas weekend. Little Fockers led with $25.8 million, followed by True Grit with $24.4 million and Tron: Legacy with $18.8 million. The latter has earned $131 million to date domestic and about $65 million abroad for a total of about $196 million.

The Chronicles of Narnia: The Voyage of the Dawn Treader landed in fifth place with $10.3 million for a domestic total of $86.9 million. The third film in the series continued to do great business overseas, where it has racked up $210 million in ticket sales for a worldwide total of about $297 million.

The Illusionist meanwhile made about $46,000 at three theaters in its second weekend of release in the U.S. The film has grossed about $146,000 domestic and $2.8 million overseas.

Online Film Critics Give Another Nod to ‘Toy Story 3’
Gravity Drops in L.A. with Levinson in Charge