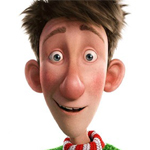 Aardman, Sony and Columbia are reminding movie goers it’s only six months to the holidays by releasing the second trailer to the animated comedy feature Arthur Christmas.

Here’s how the studios describe the film:

The 3D, CG-animated family comedy Arthur Christmas, an Aardman production for Sony Pictures Animation, at last reveals the incredible, never-before seen answer to every child’s question: ‘So how does Santa deliver all those presents in one night?’ The answer: Santa’s exhilarating, ultra-high-tech operation hidden beneath the North Pole. But at the heart of the film is a story with the ingredients of a Christmas classic — a family in a state of comic dysfunction and an unlikely hero, Arthur, with an urgent mission that must be completed before Christmas morning dawns.

It is set to be released in theaters Nov.23.