A new trailer for Floyd Norman: An Animated Life has been released ahead of the film’s screening at Comic-Con. Attendees will have a chance to take in the intimate film journey through the life and career of the legendary Disney animator on Friday, July 22 at 3:10 p.m., followed by a Q&A with Norman, filmmakers Michael Fiore and Erik Sharkey, and composer Ryan Shore. A separate panel will also be held Friday evening at 9.

Floyd Norman: An Animated Life will be released through FilmBuff in theaters, On Demand and Digital HD on August 26. You can preorder the film on iTunes now. Visit www.floydnormanmovie.com for more information.

From filmmakers Michael Fiore and Erik Sharkey, the feel good documentary is an intimate journey through the celebrated life and career of the ‘Forrest Gump’ of the animation industry – Disney Legend, Floyd Norman. Hired as the first African-American at Disney in 1956, Floyd worked on such classics as Sleeping Beauty and 101 Dalmatians, to name a few. In 1967, he was hand-picked by Walt Disney to join the story team on The Jungle Book. He would later work at Hanna Barbera on many classic cartoons, including Scooby-Doo. His talents would later take him to Pixar to work on Toy Story 2 and Monsters, Inc. … But on Mr. Norman’s 65th birthday in 2000, Disney HR force-retired him. He struggled with Disney’s decision and refused to leave his “home”. For the last 16 years, Floyd has “hijacked” a cubicle at Disney Publishing, unpaid, but picking up freelance work when he can. At 81 he continues to have an impact as both an artist and a mentor. As Mr. Norman says “[He] [plans] to die at the drawing board.” 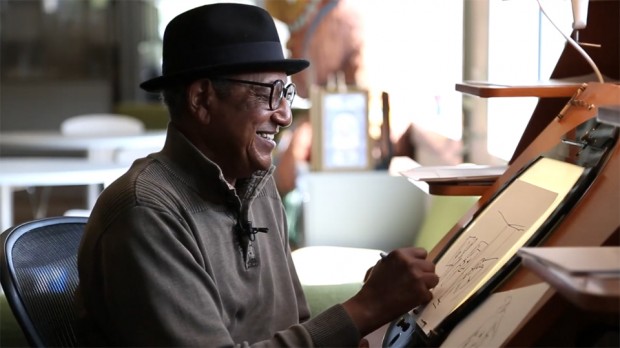