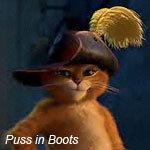 New promotional material for the holiday season’s animated features are debuting on the web every day. We’ve seen photos, posters and trailers for Paramount’s The Adventures of Tintin, Sony/Aardman’s  Arthur Christmas, Disney’s The Muppet Show and Warner Bros.’ Happy Feet 2 competing for fan attention, and today, it’s time for Paramount/DreamWork’s Puss in Boots to up the ante.

Thanks to Fandango’s new movie blog, we now have a hilarious new motion poster for the fantastic feline’s new holiday adventure. Puss (voiced by Shrek veteran Antonio Banderas) stars in his own adventure in the Shrek prequel, which will be out in theaters on November 4. The 3-D movie is directed by Chris Miller and also showcases the voices of Salma Hayek as Puss’s romantic interest Kitty, Zach Galifianakis as his childhood buddy Humpty Dumpty, and Billy Bob Thornton and Amy Sedaris as the villainous hillbilly duo Jack and Jill. The script is by Tom Wheeler and David H. Steinberg.

Here’s the new motion poster, in which Puss tries to capture an elusive light source:

And here’s the recent Puss pantless teaser, in case you missed it: