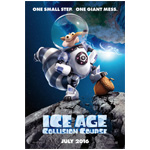 Blue Sky Studios and 20th Century Fox have unveiled a new trailer for the upcoming CG animated feature adventure Ice Age: Collision Course, arriving in theaters July 22. The spot sets up the cataclysmic events of the fifth film, following the acorn-crazed Scrat into space and following a violent meteor shower back down to earth, where the Ice Age gang must confront the end of an era and look for help from an unlikely corner.

Scrats epic pursuit of the elusive acorn catapults him into the universe where he accidentally sets off a series of cosmic events that transform and threaten the Ice Age World. To save themselves, Sid, Manny, Diego and the rest of the herd must leave their home and embark on a quest full of comedy and adventure, traveling to exotic new lands and encountering a host of colorful new characters.